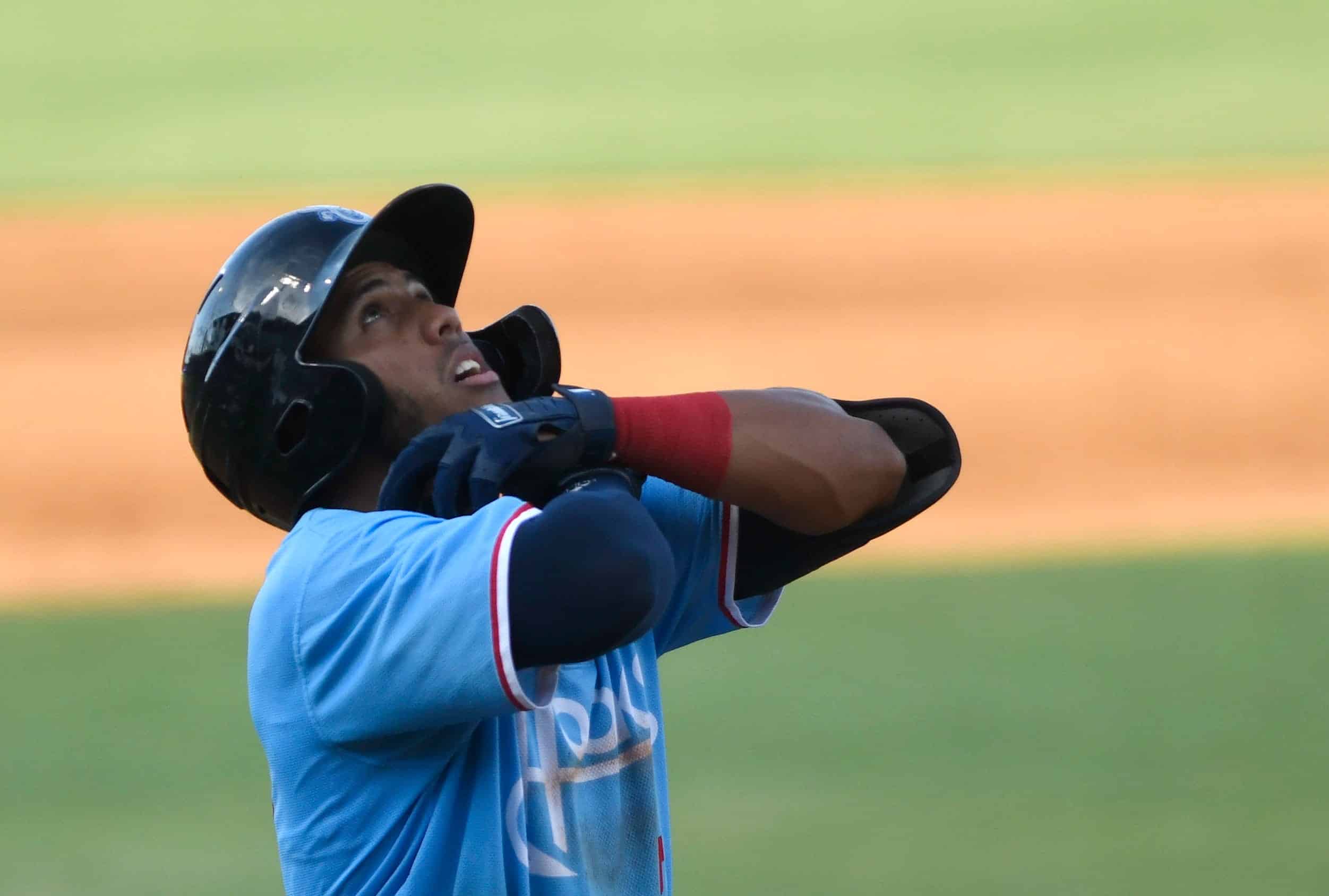 León played through an injury during the Puerto Rican Winter League this offseason, a source said last month. The righty slashed .204/.286/.367 with seven extra-base hits through 33 games for the Cangrejeros de Santurce. León suffered a facial injury during the 2022 Minor League Baseball season with the Sugar Land Space Cowboys, but he finished the year with a .796 OPS in 115 games.

The Astros promoted Devin Conn to Triple-A Sugar Land in late June for 11 appearances. Between his action there and in Double-A Corpus Christi, the right-handed reliever posted a 3.12 ERA in 66.1 innings pitched with 50 strikeouts.

Jimmy Endersby ended the 2022 season with the Space Cowboys, after 16 appearances with the Hooks. The starting pitcher sported a 5.32 ERA between the two affiliates, striking out 99 batters.

“I’m blessed and grateful for this opportunity,” Endersby said. “(I) can’t wait to showcase all the hard work that I’ve put in this offseason. I’m excited to see all the guys again and get back to work.”

After undergoing Tommy John surgery in August 2021, Austin Hansen was officially cleared to face competition this past September. The right-handed starter was also a non-roster invitee for 2021 Major League spring training.

“I am looking forward to the opportunity to be able to showcase all of the hard work that I have put in over the last 18 months of rehab,” Hansen said. “I am really excited to be back out there on the field with the guys and be able to put on the uniform again.”

The injury bug bit Jaime Melendez in the latter half of this past season. The right-handed starter appeared in 23 games for Corpus Christi, sporting a 2.01 ERA with 31 strikeouts and nine walks through five June outings.

Acquired in the three-team trade for Trey Mancini at the 2022 deadline, Jayden Murray started six games for the Hooks, striking out 26 batters in 27.1 innings pitched. The Astros left Murray unprotected from the Major League phase of the Rule 5 Draft, but he went unselected.

Houston selected Joe Record in the minor-league phase of the 2020 Rule 5 Draft, and in 2022, the Astros promoted the right-handed reliever to Triple-A. Record made 29 appearances for the Space Cowboys, posting a 5.45 ERA with 9.0 strikeouts per nine innings.

“I’m honored to have been selected in the Rule 5 Draft and grateful for the invitation to Big League camp,” Record said. “Not many people get to train with the defending World Series champions. I’m very excited to learn from such a talented group of ball players and coaches.”

Matt Ruppenthal made the jump to Sugar Land this past summer for two relief appearances. The Vanderbilt product was quickly demoted back to Corpus Christi, where he appeared 43 times in 2022. The Astros sent Ruppenthal to the Arizona Fall League, where he was named an All-Star. The righty struck out 15 batters in 10.1 innings pitched.

The Astros designated Jairo Solis for assignment prior to the 2022 season to open a 40-man roster spot. Solis last pitched for an affiliate in 2018 for the Class-A Quad City River Bandits, missing the last three Minor League Baseball seasons due to undergoing Tommy John surgery late into the 2018 season and again in June 2021.

Scouts compared Misael Tamarez to Cristian Javier. The right-handed starting pitcher saw action in Triple-A to round out 2022, striking out 20 batters in 18 innings of work. If there’s one starting pitcher to make a run at a September call-up, Tamarez is the pitcher to watch out for.

After suffering a finger fracture in July, Luke Berryhill made his return to Double-A in August. With Scott Manea no longer in the system and one of Yainer Díaz and Korey Lee expected to start the season in Sugar Land, Berryhill could likely be the next backstop option for manager Mickey Storey.

“It’s an incredible opportunity,” Berryhill said. “I’m very excited to work with the big league staff and players to start learning up close what it takes to be a big leaguer. I’m also looking forward to the chance to prove that I belong up there and that all of the hard work I’m putting in gets noticed. I’ve been waiting for this opportunity for a long time and I feel very blessed to have finally gotten it.”

If Berryhill isn’t the first option, then it most certainly will be Cesar Salazar, who appeared for Sugar Land in 2021 and in 2022 and was a non-roster invitee last spring. Astros pitching prospects raved about Salazar for his ability to adapt to every starter and reliever he worked with. Derek West, a Hooks reliever, was also complimentary of all three Double-A catchers for their contributions in 2022.

Brother of Garrett, C.J. Stubbs climbed his way back to Corpus Christi this past season, after being demoted to High-A Asheville in 2021. Stubbs played more first base in 2022 as well as filling in the corner outfield positions when needed. The righty slashed .211/.323/.504 with 11 home runs in 41 games for the Hooks.

Grae Kessinger received his second non-roster invite Thursday. The Ole Miss product started to find his swing in the latter months of the 2022 season but ended the year with a .693 OPS for the Hooks. The regular infielder played first base in the 2021 Arizona Fall League but didn’t flash the new position for Corpus Christi in 2022.

Son of Billy, Will Wagner is coming off one of the best 2022 Arizona Fall League performances: 14 games, .346/.433/.712, six doubles, two triples and three home runs. Tourists development coach Mike Ramazzotti dubbed Wagner the “Athletic Max Muncy” for his ability to play multiple positions and flash power from the left side.

Scott Schreiber joined Wagner in the Arizona Fall League, where he slapped a walk-off hit in the league’s championship. The 27-year-old power hitter returned to the Hooks for 12 games this past season, after undergoing back surgery in early April and hitting the injured list for a week in September. While listed as a corner outfielder, Schreiber’s future is likely at first base.

“(It) means a lot,” Schreiber said. “I’m very blessed and fortunate that God has given me the opportunity to get the invite again this year. (I’m) looking forward to working and refining my craft.”

The Astros left Corey Julks unprotected from the Major League phase of the 2022 Rule 5 Draft. He went unselected, but the Houston product could make a run for the final 40-man roster opening with a strong spring training. While a second-time non-roster invitee, Julks will enter camp with third base and second base among his position additions with more power at the plate and more awareness on the base paths.

Ross Adolph was among the group of Double-A outfielders to miss time in 2022. Acquired by the Astros in a 2019 trade, he could be poised to start the 2023 season in Sugar Land. The righty walked 49 times in 59 games this past year for the Hooks.

“I’m extremely blessed and thankful to be able to get this opportunity,” Adolph said. “It’s a big step for my career, and I’m excited to get back with the guys and show what I can do.”

Justin Dirden was a lock to receive a non-roster invite this spring. The 25-year-old outfielder slashed .302/.384/.558 with 40 doubles and 24 home runs between Sugar Land and Corpus Christi this past season.