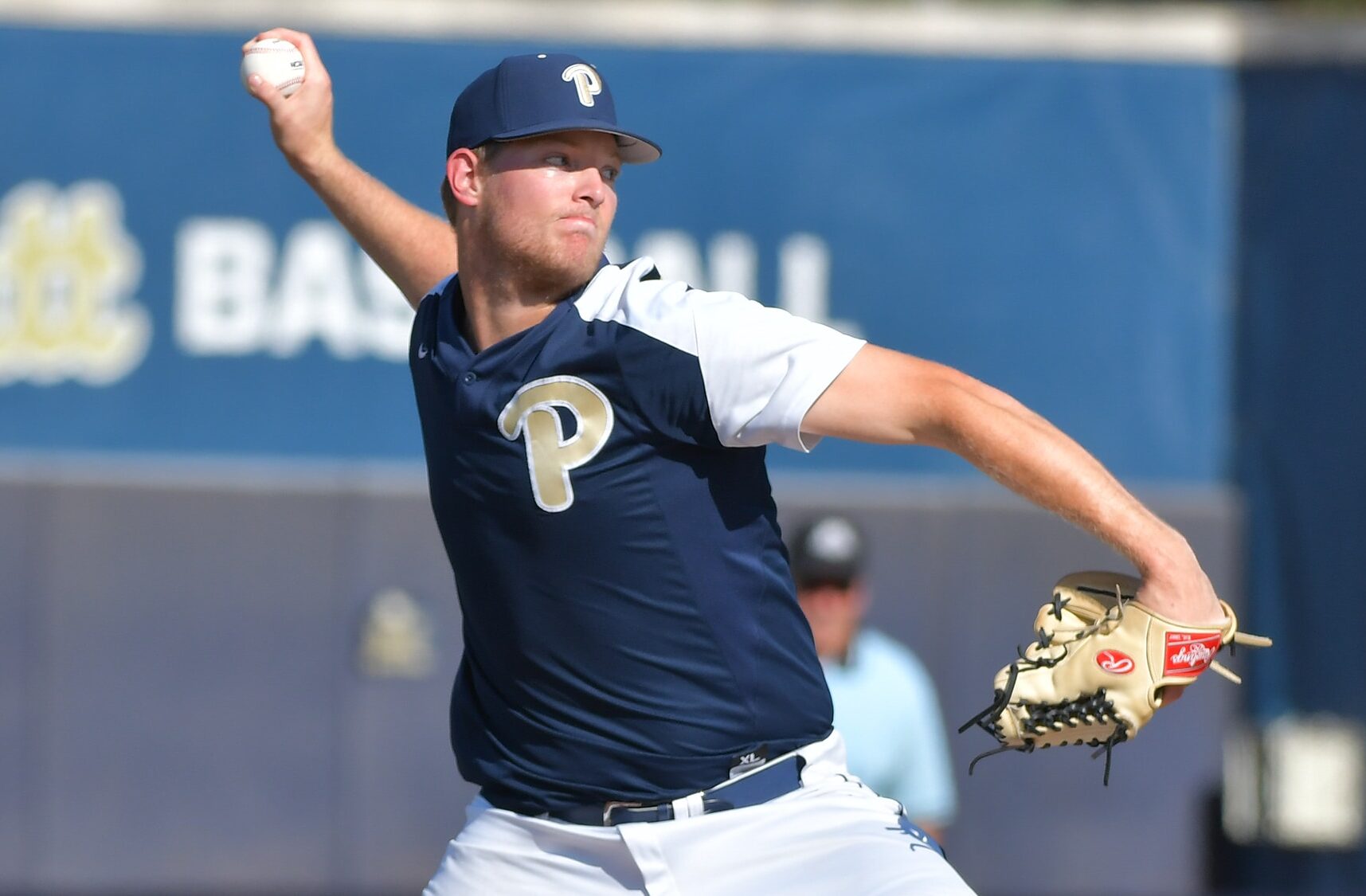 Derek West finally found a full season of professional baseball, three years removed from being drafted by the Houston Astros in 2019. With the hunger to see a quick rise in 2023, West turned to Puerto Rico this winter, where he dominated the regular-season circuit.

The Astros never advised West to continue his season in a winter league. But to improve his stock, West took an offer to play for the Cangrejeros de Santurce to continue his development,  riding the momentum of an improved second half.

West trotted to the mound 12 times for the Cangrejeros this winter. He allowed two earned runs, as he carved through 20 batters, surrendering four walks, in 16 innings of work.

A 14th-round selection, the Pitt product appeared in 13 games in Class-A Short Season in 2019, before his first offseason hit his plate. And following a lost season in 2020 due to the COVID-19 pandemic, another wrench was thrown into the works.

West suffered an ACL injury in 2020 that sidelined him for almost all of the 2021 season, as he returned for the final month of play. He made six appearances for the Tourists before his first normal offseason of his professional career.

“I was battling back, so I just lived one day at a time, and it was just focusing on being in the present,” West said.

This past year was a different animal though.

West made just seven appearances with High-A Asheville before receiving his call to Corpus Christi in May. Striking out 16 batters in eight innings of work, the Astros saw the righty ready for a jump to the Texas League.

Foremost what prepared West the most for arguably the biggest minor league level jump was command. The reliever put fastball control on the forefront of his mind in those limited appearances in North Carolina.

In the big picture, West wasn’t as sharp in four months for the Double-A Hooks though. He posted a 4.82 ERA across 46.2 innings of work, but there was more to break down from the reliever’s promotion. Excluding July, West hit the rubber 17 times; he allowed five runs over 25.1 innings of work with 30 strikeouts and 13 walks.

“That first month, it was all about learning those kinks and having to be a little bit even closer in the zone, because the zone gets a lot tighter,” West said. “And then after that first month I excelled pretty well in Double-A.”

Excelled he did. Although yielding 11 runs in 13 innings pitched in July, West followed the All-Star break, which ran July 18-21, with a 1.89 ERA in 12 appearances, 19 innings pitched. He struck out 24 opposing hitters, proving to the organization that his career was on the upswing.

West credited Hooks pitching coach Thomas Whitsett, who was promoted to Astros assistant minor league pitching coordinator this offseason, with “astronomically” improving his arsenal this season, helping him find comfort with his breaking pitches. And Whitsett noticed how quickly West got back into shape after losing two seasons of development.

“He’s got more athleticism in his delivery than he has ever had,” Whitsett said. “And it’s been partly due to his training and feeling good, but also the delivery work he’s done. We were just really working on his lower half and his ability to repeat it.”

What made the transition to Double-A so fruitful for West was his ability to adjust and his ability to listen. There, Whitsett saw everything a coach wants in a growing pitcher like West.

From Erick Abreu in Triple-A Sugar Land to Whitsett in Double-A Corpus Christi, West said a pitcher can’t go wrong with any coaches in Houston’s organization. All the coaches are on the same page following promotions, knowing where a pitcher’s trajectory is before he even takes the mound for the first time in a new uniform.

“It doesn’t matter where I start off or where I end up, I’m always going to be in good hands in terms of pitching coaches with the Astros,” West said.

This past season was a year of needed development for West. A sweeping slider, a pitch West had never thrown before, was shoved into his three-pitch arsenal that consisted of a fastball, a cutter and a curveball, when he landed in Asheville earlier this year.

The sweeping slider was flashed early in the year on 0-2 and 1-2 counts, when West was just getting a feel for the addition. By September with the Hooks, it became his weapon.

Complemented by a fastball that touches 97 mph and sits 94-96 mph, the mix consistently improved West’s strikeout rate. In Puerto Rico, West is slinging fastballs nearly 80 percent of the time, generating whiffs over 44 percent of the swings against it when the heater crosses the top of the zone.

Offensively, the Puerto Rican Winter League is righty dominant. A few left-handed hitters are scattered throughout the starting nines, but for West, his revamped slider is what buries right-handed hitters down and away.

“I’m excited to have you that pitch consistently in my arsenal for next season,” West said. “It’s right where I want it to be, where I can throw it anytime.”

The cutter isn’t seeing as much usage this winter, but that’s not because the pitch is being banished by West. The reliever is looking to generate outs with his retooled pitch selection, and to Whitsett, honing in on the sweeping slider is advantageous to West’s future.

“I wouldn’t say it’s pigeon holed to lefty or righty. He throws that cutter to righties actually quite a bit,” Whitsett said. “Him adding another weapon to the righties and being a sweeper and something that moves away from right-handed hitters is probably in his best interest, and he’s shown some really good shapes and continues to go out and throw that thing on a consistent basis.”

From the videos coming back from Puerto Rico, the Astros player development staff is noting the progress from West’s improved arsenal. Even though the cutter isn’t seeing as much action, it’s still an option moving forward.

The goal of the offseason was to put his repertoire in a position where he could rely on any of his pitches and not just his fastball at the top of the zone. Comfortability in pitching to both bat sides is what West found in Puerto Rico.

Looking toward spring training, West said he will be firing on all cylinders with his four pitches, striving for an opportunity to be a quick riser in the system. The 26-year-old hurler hasn’t heard anything on his camp status, but his age and development may pave the way to a non-roster invite.

“The Astros, they do like me a lot,” West said. “They respect everything that I’ve gone through in my career. I’ve had three surgeries dating back to college, and I’ve come back better from each one. So they definitely respect my grind and my story, and I’m thankful for the Astros to keep me around to keep showing them that they made the right decision.”

A rise in spring training isn’t the only unchecked achievement on West’s mind. The 2023 World Baseball Classic is nearing, and for West, he’s trying everything he can to play for the Netherlands.

West’s mother, a dual citizen of the Netherlands and the United States, makes him eligible to play for the country in the World Baseball Classic. But West is still waiting approval to join the squad in March, as more documentation is being evaluated to confirm his eligibility.

“If I’m eligible, it’s literally by the thin skin of my teeth,” West said. “But I’m hoping they deem me eligible, and I’ll be excited. I know they’re looking forward to having me.”

During the Kingdom Series in the first week of November in Curaçao, West picked the brain of Netherlands pitching coach Bert Blyleven, a National Baseball Hall of Fame inductee. Meeting the staff along with a pool of possible additions to the Netherlands roster, he impressed the staff.

Blyleven told West he looks forward to working more with him at the team’s Arizona training complex this spring, bringing hope to West as he awaits a decision.

Tying back into his stay in Puerto Rico, West built camaraderie with three Dutch commits who he played with and against: Pittsburgh Pirates outfielder Josh Palacios, Cleveland Guardians outfielder Richie Palacios and free-agent shortstop Didi Gregorius.

The turnaround is quick for West. Ending his Double-A season in September, he turned to the Kingdom Series roughly over a month later before heading to Puerto Rico. Now, he awaits his next opportunities as a possible non-roster invite and as a hurler for the Netherlands in the World Baseball Classic, before embarking on a second full season in Houston’s system. 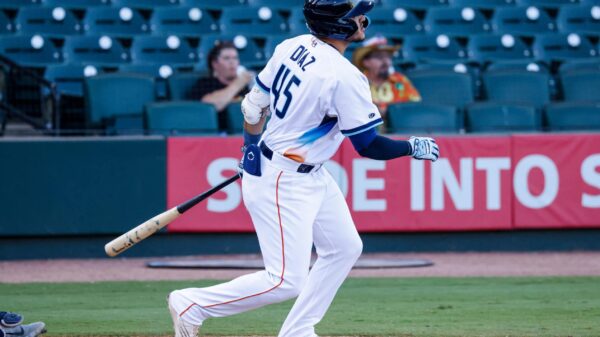 Now that the season is over we will review each position in the minor league system during the 2022 season. This week we will...