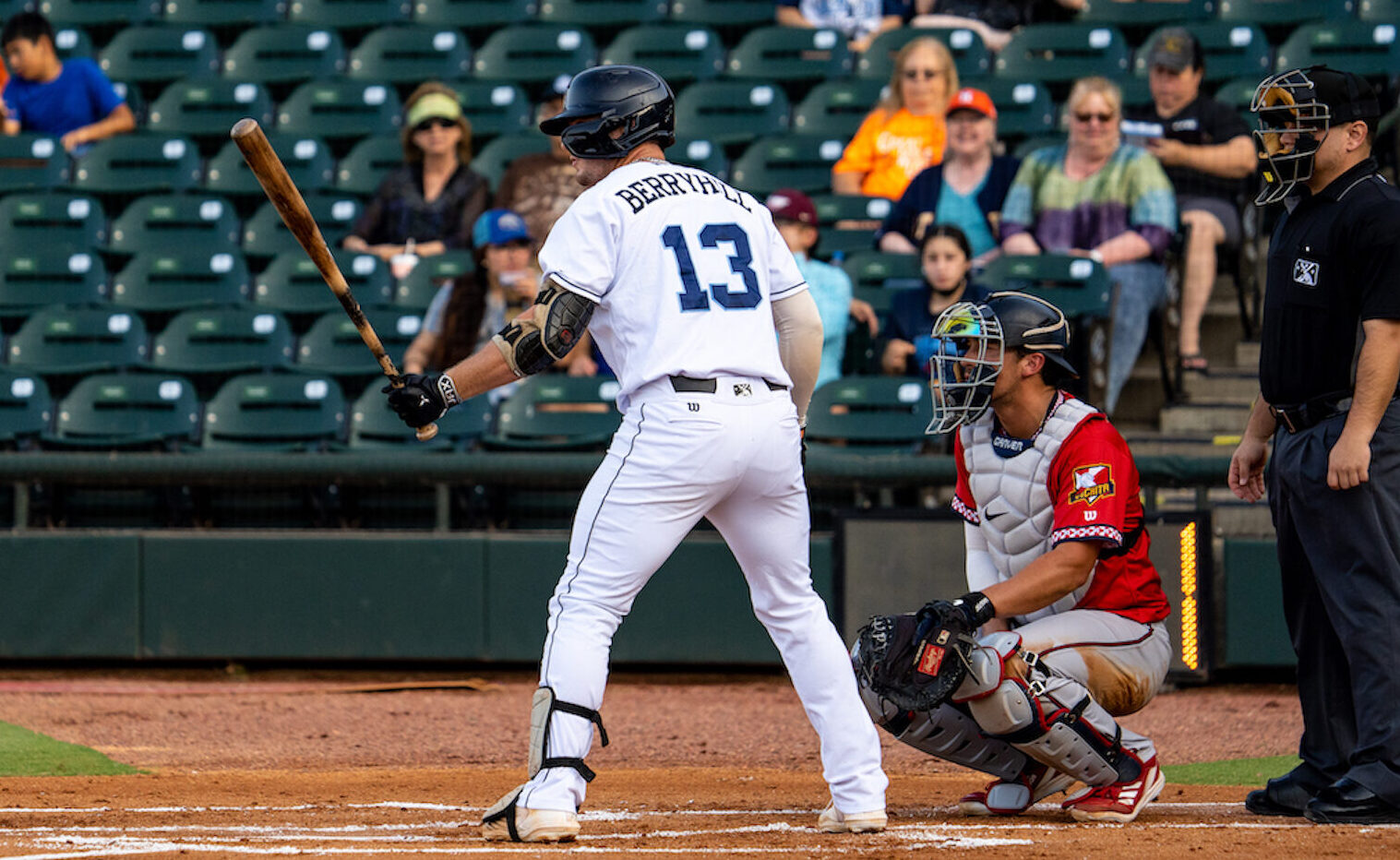 Last January, the Astros traded pitcher Cionel Perez and acquired catching prospect, Luke Berryhill. Luke put together a really good first season in the Astros system slashing .295/.413/.561 with 20 2B, 15 HR, 54 RBI in 73 games, earning the Astros minor league player of the year award. I spoke with Luke last year about the trade, his time in a new system and some swing adjustments, which you can read here.

Now, in his second season in the Astros system, Luke is still finding success as he plays in Double-A for the Corpus Christi Hooks. “I’ve actually made bigger swing changes this year after maybe the first month of the season,” Berryhill said. “Me and our hitting coach really got together and put some big changes together and now after the last couple weeks, it’s finally starting to pay off. Overall, I think it’s been a pretty good season so far. Not as high profile as last year, but I still feel, for all the adversity I’ve gone through, it’s still pretty good,” he added.

Despite that adversity, off-season shoulder surgery being one part of it, Berryhill had an incredible stretch which saw him reach base in 51 consecutive games with an plate appearance. Going through a streak like that, players don’t always realize they are in such a streak. I asked Berryhill when he realized he was on a big streak and he said:

“It was at the beginning of the Springfield series (June 14th). I think I was around 40 or 42 games and somebody mentioned it and I was like ‘wow, I didn’t even know that’ I was just having fun doing the best I could and after that, it kind of started getting into my head after I was three of four at bats in the game and I wasn’t on base yet, I started pressing a little bit. It kept working out until I got to 51 games, and you know everything comes to and end at some point, I’m just glad I had a successful year up to that,” Berryhill said.

While being in the streak is nice, it can come as a relief sometimes for the streak to end so it’s not weighing on the player. “I was a little disappointed. I was going into the 5th at bat and my hitting coach came over and said ‘hey I know what’s on your mind, just stick to your approach and whatever happens happens’ It ended up not going my way, but you know it is a relief to get that over with now I can go out and have fun,” Berryhill said.

Berryhill primarily plays catcher and first base, but recently he has seen a little time in the outfield.

“I do enjoy playing outfield. I always like getting a different challenge I guess since I’ve caught for so many years, it always fun playing a new position,” Berryhill said. “I’ve played some outfield in the past a little bit in high school and I was always really good at it, usually get good reads and I’m pretty fast so I feel like if I keep playing out there I can be an asset to the team,” he added.

A big part of Berryhill’s life is country music and his own singing and song writing. Last year, Luke sang the National Anthem for the Woodpeckers and then went on a tear. This year, he sung the National Anthem on May 28th and has hit well since batting .299 with .875 OPS, 7 2B, and 4 HR in 24 games.

“I hope it’s a good luck charm. We may have to start singing it every week at that point. See if it will multiply. I enjoy singing it so I’ll sing it as much as they let me,”  Berryhill said.

Even with a successful season to this point, players are always working on things as the season progresses. I asked Luke what he is working on and he said “Just trying to dial it in and try to get it as consistent as possible. In the Springfield series I had two or three really good games and then fell off for a game or two, so I’m just trying to get everything consistent. Try to remember the cues and be able to repeat it day by day. I’m also working on my throwing accuracy and velocity and on my foot work catching wise. I think those two things are the things that are going to take me to the top.”

The Astros organization clearly values the defense behind the plate and the ability to call a game as a catcher, evident at the major league level with Martin Maldonado. “I’ve been really working on my pitch calling and preparation to face the opposing hitters. That’s probably my biggest one (goal) at this point, to try to get as good at that as I can and just stay consistent with the bat,” Berryhill said.

Lastly, I wanted to talk to Berryhill about technology and baseball. Minor league baseball now has a pitch clock. If a batter comes up with no one on, there are 14 seconds on the clock. The batter has to be in the box at 9 seconds, regardless if the pitcher is on the mound. Last week, Berryhill struck out on an automatic strike for not being in the box despite the pitcher not even being on the mound.

“I was very upset, and then yesterday I had a strike one called against me. I don’t know what’s happening, I haven’t had a call like that since the very beginning of the season. I wish they would let the pitcher dictate that. If iI’m not in the box while he’s pitching that’s on me. But the fact that I have to be standing in the box waiting on him to just circle around the mound, I think that’s ridiculous,” Luke said.

The benefits of the pitch clock are there. The shortened game times and benefit for the pitchers as well. As a catcher, Berryhill said it can be beneficial or detrimental to both sides, just depends on the situation.

Despite the strikeout on the pitch clock the other night, Berryhill has put together another strong season in the Astros minor league system. He was the Astros minor league player of the year in 2021 and has followed that up with more good numbers in 2022. If he continues to find that consistency with the bat, and shows the ability to play well at catcher, first base and outfield, he may not be in Corpus Christi much longer putting him that much closer to making a big league roster.