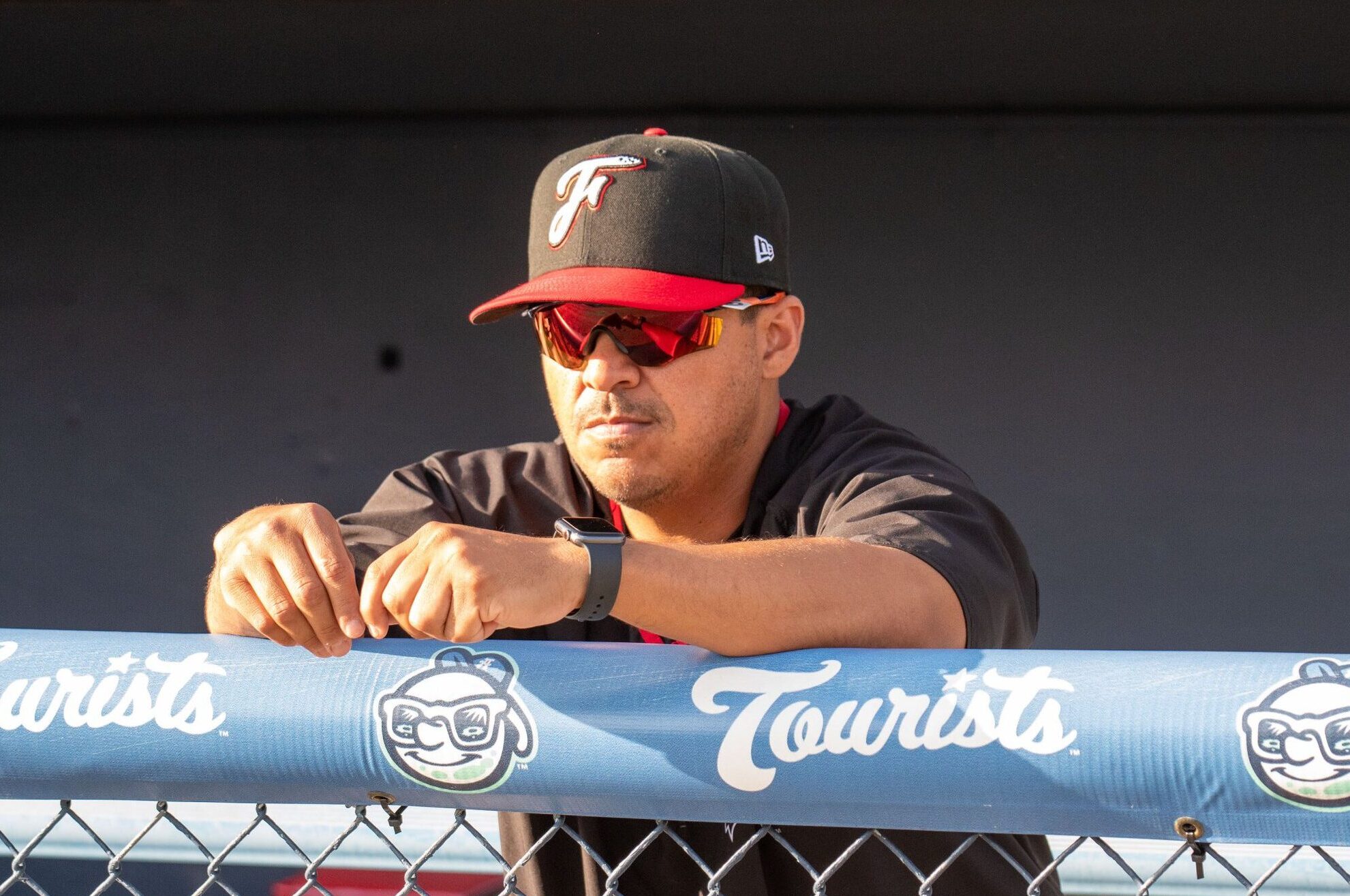 Just like the Astros do well finding and developing prospects, they have also done well finding coaches. This can be seen from the amount of coaches the Astros have lost to other organizations. One coach in particular who is having success is hitting coach Jose Puentes. Puentes is the hitting coach for the Single-A affiliate, Fayetteville Woodpeckers, and is in his third season with the Astros.

Puentes has seen an interesting route to coaching, but after years away from the game, he got back into coaching high school baseball in the San Antonio area. One night, he was looking into professional coaching jobs and found an opening for the Astros. Puentes thought about with his family and after applying, he was hired as a hitting coach with the Astros in the Dominican Republic in 2020. After a year at the Astros spring training complex in West Palm Beach, Florida, in 2021, the Astros brought Puentes back to be the Woodpeckers’ hitting coach for the 2022 season.

“It’s day and night honestly,” Puentes said regarding the differences between coaching high school players and professionals. “If I could put it simple, in the high school I was at, our goal was to swing at the right stuff and hit the crap out of it. It wasn’t mechanical stuff because there is too many guys you have to coach and you let them figure it out or help them a little bit. In high school you don’t have the time you have here to work.”

Despite getting his dream job in 2020, Puentes was pushed back to the United States due to the pandemic.

“In 2020, we worked remotely with the guys, and I learned a lot because we would have meetings with other coaches in the department and it was a learning experience every week,” Puentes said. “You think you know stuff when you’re coaching high school, you look around the room and realize I don’t know that much. You get humbled a little bit in the beginning. I’m still learning. Every day there is something different. I try to pick people’s brains that come in and watch. What they see, what can I do better.”

Being assigned to a full season team, like the Fayetteville Woodpeckers, is different than the complex for many reasons.

“This is a grind, and I hate using that word, but for the players they have to get in here everyday, lift, do all this other stuff and somehow at the end of that, at 7 p.m., they have to compete,” Puentes explained. “As for me, there is a lot more preparation for these kind of games than in FCL. The preparation, the video reviews, the conversations are different. I would say preparation is more. You have to be ready for them not for you. If they ask you something you better have an answer.”

But for the players to be willing to ask a question to a hitting coach, they have to have trust that he knows what he is talking about and looking our for their best interest.

“At the beginning, it is a lot of listening to them,” Puentes said. “You have to be ready when they need you. You’re not going to just go to a guy that you don’t know and just tell them ‘hey try this’. The younger guys will do whatever, but it’s different than coaching a guy who played three years in college baseball that’s heard some stuff already.

“It really depends on the level of the player. These guys I’ve known for two years now. A lot of them I had them last year. The players talk among themselves. If you build a good rapport and a good reputation within the organization, the players know that you are going to do what’s best for them even if it means they have to change,” Puentes said.

It may sound obvious, but the players need to know the coach is going to help them.

“They just want you to help them,” Puentes said. “Is this guy going to be able to help me? It’s a trust with them. You have to earn their trust.”

Puentes has a way of connecting with all the players, primarily because he can communicate with them in both English and Spanish. He has experiences that can tie to both the foreign players and the American players as well from his time living in Mexico, coaching baseball in the U.S. and his time as a coach over in the Dominican Republic.

Coaching at that level of professional baseball is challenging because the players are so young and raw.

“At this level there is a lot of stuff they can work on,” Puentes said. “Their swings aren’t even close to being what it’s supposed to be. But the thing is, they have to go compete every night after. So the guys that are successful are able to work on it, work on it well, and then it just takes over in the game or they actually try the stuff that they do in the cage. A lot of guys shy from it. They’ll do everything in there (the batting cage) right and then bail on their work and go back to what is comfortable.

I asked Puentes about his philosophy as a coach and he how he tries to share that with the players. Puentes said he uses a combination of old school and new school philosophy. He added a lot of old school stuff works but now it can be blended with the new wave of information that coaches get.

Being the first full-season team in the organization after the FCL, the Woodpeckers tend to see a lot of turnover on their roster.

“Remember, we are practicing hitting. The doctors practice medicine, they give you some stuff based on a symptom, they don’t know if its going to work. So we try different things based on what I see. So sometimes it works, sometimes it doesn’t. If it doesn’t I’m the first one to say it didn’t work. End goal is always going to be the same, hit the ball hard. Hitting singles is not going to get you to the big leagues, it won’t, its very rare. So you have to be extremely good at something else. I’m not saying power hitters either, hard line drives. That’s what we teach, hard line drives.”

The coaching never takes a break. Yes, there is a ton of work done before the game in the cages, but he is frequently talking with players during the game, especially during a pitching change where they review video.

“So we have different informations on the pitchers. Looking at what kind of pitches they have, the velocity of it. Some hitters don’t want to know, they just want to know how fast and how slow,” Puentes said. “Everything we try to do here, we are trying to do the same stuff as the big leagues so when you get there it’s not such a shell shock.

“The pitchers have a bible of what you’re not good at as a hitter and they are going to attack your ass there, so at the same time when you prepare the same way, you go out there and want to hit the mistakes, want to look for certain zones.”

As analytics and data have become more of a tool in baseball, coaches have had to figure out the best way to use it.

“It depends, does the guy need to know that stuff all the time. It’s a feel thing,” Puentes said. “How do I use it to coach them. Maybe to show them they can hit it this hard and there is more to motivate them. We do competitions and stuff. We want you to hit hard line drives within a certain window.”

The data compiled by a team can be very beneficial for a player, especially one that is young into his career.

“If a guy is struggling we can look at certain areas of the zone and be like ‘hey, you’re not very good at this zone right now,” Puentes said. “Helps with approach, if you aren’t good at something why are you swinging at it or vice versa, you’re very good at this zone so we want you to tunnel stuff in that. If it’s there, go. Sometimes they don’t even know where they are good at, they are learning where they are good at”, Puentes said.

Hitting is not a simple process. You are asking guys to hit a baseball that is just under three inches in diameter with a wooden bat that is around 2.5 inches thick. Oh, and the ball is coming in somewhere between 70-100 mph.

“It’s already complicated enough, hitting, and try to keep things simple. As simple as possible sometimes, depending on the player. You have to feel that the guy understands pretty much what you are talking about in depth. You don’t want them overthinking or going into rabbit holes that you don’t need to,” Puentes said.

During the course of the season, the stats will begin to pile up, for good or bad.

“I don’t want them to think about their numbers at all, I want them to think did I swing at the right pitch, did I hit it hard and did I hit it in the air. And sometimes they are going to catch it, that’s just baseball. If we can get hitters to think that way, their numbers would be so much better because they are going to walk, going to be selective. You know, the goal is to swing at the right stuff and hit it hard,” Puentes said.

Sometimes guys can do everything right. Swing at the right pitch, hit it hard, hit it to the right spot and it just doesn’t fall.

“There is a lot more metrics that we have. Sometimes it’s just bad luck. Then sometimes I have to talk to the guys and say ‘next time get a blooper and see if that gets you into the big leagues’, you pissed on a ball and they caught it, great job man,” Puentes added.

During this conversation with Puentes, you can tell just through the answers and the sound of his voice the love he has for baseball and coaching. But it goes beyond that for him. He is a mentor and father figure for sometimes kids as young as 17 who are playing professional baseball for the first time in another country than their home country.

That reputation and rapport is important, and Puentes has built that through his time in the system working with a multitude of young hitters. This is the kind of coach needed in the Astros’ system and hopefully he will be around for a long time.