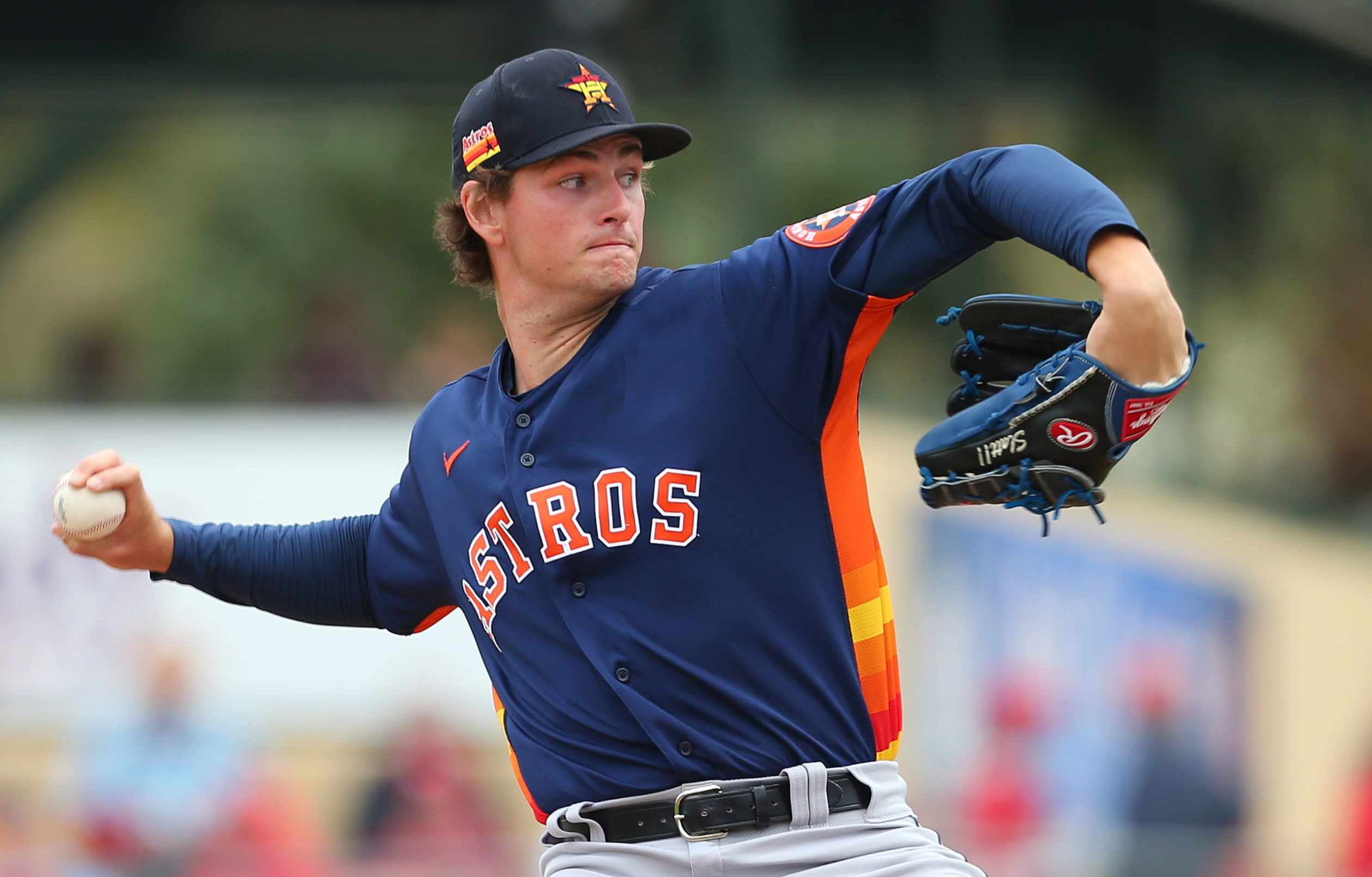 Back in late 2017 things seemed to be going right for the Astros. They were coming off their first World Series Championship in franchise history, but also had one of the top pitching prospects in baseball still in waiting in right-hander Forrest Whitley. While the Astros continued their dominance of the American League, Forrest suffered a few setbacks dealing with some nagging injuries and ultimately missing the 2021 season.

Drafted in the first round of the 2016 draft, Whitley quickly burst onto the scene with a dominant 2017 season which saw him strikeout 143 in just 92.1 innings across three different minor league levels. Forrest was suspended for part of the 2018 season but still had some solid numbers with a 3.76 ERA and 34 K in 26.1 innings. In 2019, Whitley was thrown another “curveball” when he had an oblique injury, a nagging elbow injury and some mechanical adjustments which led to him throwing just 59.2 innings.

With the minor league season getting cancelled in 2020 due to COVID, Whitley went down to Corpus Christi where things didn’t go as planned. I asked Forrest about his time there and he said “When things got moved to Corpus, I had to deal with some quarantine stuff because of COVID which took me out of throwing for a few days. I ended up throwing one of the best outings of summer camp after the quarantine, I actually struck out every batter. After I had made the last out, our pitching coach quickly called me back to throw to another hitter because I hadn’t reached my pitch limit, so I threw to Jake Meyers. During that AB is when I tore my UCL initially”.  The doctors told Forrest that his UCL was partially torn and he could possibly build it back with rehab.  Whitley added “It was really unfortunate timing, I really thought I was going to get called up right after that outing.”

Fast forward to the Spring of 2021 and Whitley found out he was going to have Tommy John Surgery, which he stated “I totally knew I needed”. I asked him about getting that news and he actually said he was relieved. “I was so happy that I could finally have a healthy elbow again to pitch in games with. It had honestly been bothering me from the beginning of the 2019 season but I thought it was something that every thrower dealt with. It could have been torn for a lot longer than I realized”, Whitley added.

Forrest Whitley had the surgery in March of 2021. We are now about 8 months post-surgery so I asked him about the rehab process and what kind of throwing he is doing. “I’ve been throwing for over 3 months now and it feels incredible, it doesn’t feel like I have a gaping hole in my elbow every time I throw now. I’m throwing about 5 times per week and I’m back to 120 feet. I honestly couldn’t be happier with how rehab has gone thus far,” Whitley stated. I asked Whitley if he would be ready for Spring 2022 and he said he won’t be fully ready but will be throwing off of a mound, “so I’ll be participating in everything but games I’d imagine.”

Despite the setbacks, players can still find a way to grow through it all. I asked Forrest about this and he said “I wouldn’t say the adversity has helped me grow as a baseball player, it’s allowed me to look at things through a different lens which has helped me grow as a man. I used to be so fixated on what other people said about me, it kind of drove me mad without me realizing it. Then when I had the tough season in 2019 it was the hardest fall of my life, I felt worthless. But building things from the ground up since surgery had been very therapeutic for me, I’ve slowed my process a ton, a lot less of a sense of urgency revolved around getting to the show.”

From one of the top pitching prospects in baseball to working his way back from Tommy John Surgery, Whitley has never lost confidence in his ability to be a major league pitcher. He ended our conversation stating “I genuinely believe I’m still a front of the rotation guy, if not the best arm in all of MLB. I know it might sound conceded to say, or even ridiculous based off of my recent track record, but when I’m back, I’m coming for their necks with everything I’ve got.” The Astros are still in a good position with a talented squad, but getting Whitley back to top form would add another young arm to one of the best teams in baseball.