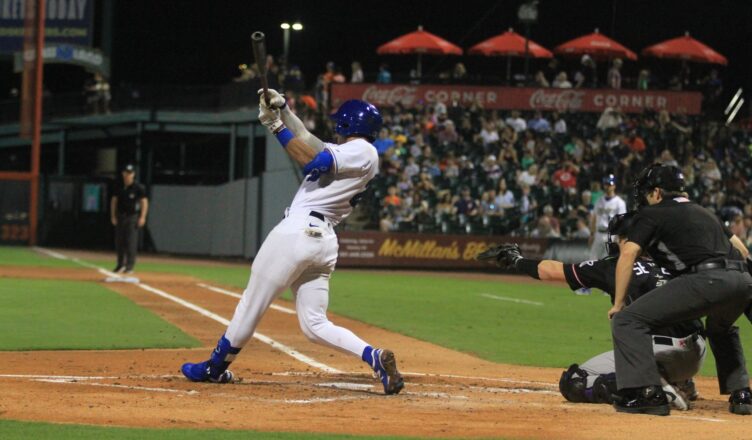 The grind in professional baseball is unlike any other. I’m not taking anything away from what basketball or football players go through, but baseball is different. Not many other sports can you go from the best player in college and #1 pick in the draft, to immediately playing in low level professional baseball in front of only a few thousand fans, and playing upwards of 100 games a season. But the grind is even different for guys who aren’t the top picks in the draft. Like all minor league players, Jeremy Pena has been grinding since he was drafted in the 3rd round in 2018.

Jeremy’s father, Geronimo Pena, played professional baseball for 7 years for the Cardinals and Indians and played in four minor league seasons before that. Let’s just say, he is very familiar with that grind. I asked Pena what he has learned from his dad and he said “I mean everything, everything I’ve learned about this game, most of it is because of my dad. He’s been teaching me the game since I was a little kid.” Jeremy also mentioned a lasting statement his father told him, “He’s always said I don’t want to give you everything I didn’t have, I want to teach you everything I didn’t know.” Jeremy stated that he has learned so much from his father on the field and outside of the field and is very grateful of the impact his father has had on him.

As mentioned above, Jeremy was a third round pick in 2018 out of the University of Maine. During the draft process, many evaluators saw him as the best defensive shortstop in the draft and he has lived up to that billing so far. I asked Jeremy about taking pride in his defense and he said “I take pride in being able to do it all. I take pride in being a great hitter, being a great defender, being fast on the bases, thinking the game through so I take pride in all parts of my game but defense is always something I’ve enjoyed doing since I was a little kid.” He also added that he wants to do what he can to help the pitcher and the team and being a plus defensively helps in a big way at one of the most important defensive positions.

The 2019 season was a breakout one for Pena as he slashed .303/.385/.440 with 21 2B, 7 3B, 7 HR, and 20 SB in 109 games. Pena appeared to be on the cusp of turning into one of the top prospects in the country. Unfortunately, like most other minor league players, Pena’s 2020 season was lost due to the COVID pandemic. “It was tough, it was tough for sure” Jeremy stated about the losing the season. “We put in all this work in the off-season to be ready for the upcoming season then the season gets canceled, it was tough.”

Jeremy was still able to put in a lot of work though. I asked him if he felt like he still improved as a player and he said “of course”. More importantly, he added “we didn’t get to play but like I said, we didn’t take the time off for granted, just tried to improve our game.” Jeremy said he went to instructs and got a lot of good work there before putting some time in at the alternate site in Corpus Christi. He then moved onto winter ball in the Dominican Winter League where he hit .306 in 30 games.

Jeremy entered the 2021 spring training with a lot of buzz, and rightfully so. He played some with the big league team and hit a couple homers including one off of Jacob deGrom. With the minor league season starting about a month after the MLB season, he was still getting reps at the minor league spring training site when he injured his wrist diving for a ball. He was slated to start the season in AAA and now the reports had him out with the wrist surgery and rehab for five months.

I asked Jeremy about the injury news and how he took it and he said “it was tough, it literally broke me. It was tough to deal with but I got hurt playing the game I love hard so it is what it is. It sucked but I was playing the game hard so I wasn’t going to take that to heart.” Pena destroyed his “projected” rehab time getting back on the field about 3.5 months after surgery. I asked him about the rehab process and he said “I got back to West Palm and tried to get back as fast as possible, but also build up pretty good to not come back, I wanted to heal well.” I asked him how his wrist felt now and he said 100% with full movement, and that is evident by his tear in Triple-A which saw him hit 9 HR in a 14 game stretch.

Jeremy Pena went 4-for-5 with 3 HR, 5 RBI last night, including a walk-off HR. Here are his 3 HRs from last night’s game! #Astros pic.twitter.com/WIdAnon0BK

Jeremy and I spoke about the adversity he has faced over the last two years and he said “its given me more appreciation for the game. I’m not taking any game for granted. So now, even when I’m tired, even when I’m hurting a little bit, I still show up to the field because it could be worse, we could be sitting at home or I could be in West Palm rehabbing.” He also added that he just goes into every game with more appreciate for the game.

Lastly I wanted to ask Jeremy about his off-season plans. Jeremy said he will be going back to the Dominican to play in the Winter League there again and to get some reps in since he missed a lot of the season. He added, “Just learn the game, learn from the veterans that play in the league (Dominican) over there. Work on little things in my game and come back ready for Spring Training.” I asked him about the AFL vs Dominican and he said he has always wanted to play over there. Jeremy stated “high quality baseball, my family is there. I get to play in front of my family.”

Despite missing the 2020 season and missing five months of the 2021 season to a wrist injury, Pena stock is still soaring thanks in part to his defense and his annihilation of Triple-A pitching in September which saw him hit .347 with 1.125 OPS in 24 games. With another great off-season and Spring Training, Pena could be ready for a promotion to the big league club where the Astros would be adding another young top talent to an already highly talented team.