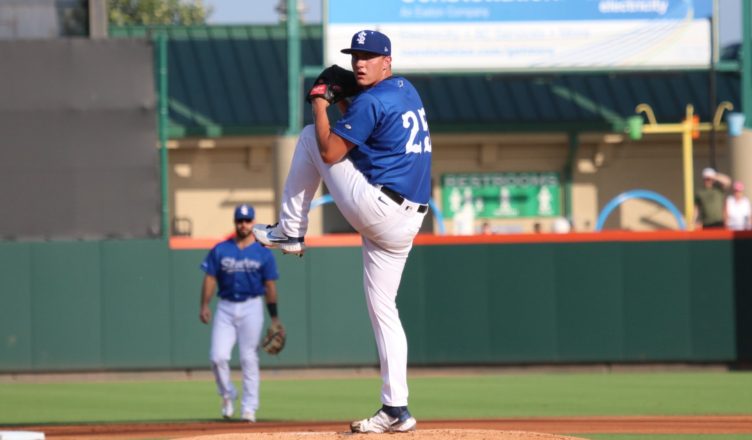 The Astros system was ranked as one of the worst in baseball by many coming into the 2021 season. This ranking seemed low given the talent in the system. Now late in the summer of 2021, the Astros have emerged possibly 4-5 top 100 prospects and will definitely be higher than the pre-season rankings. One of those prospects emerging as a top 100 player is Astros pitching prospect Hunter Brown. Brown has had a great 2021 season but the journey has been an interesting one for him.

Coming out of high school back in 2016, Brown, who only through 85-87 MPH, only received one offer and it was from Wayne State University. Wayne State is in Detroit, Michigan just minutes away from where he grew up. I asked Hunter about Wayne State and if that was a goal for high school player in the area and he said “Wayne State was definitely a school a lot of people in my area would go to. It was definitely on my radar for academics and the athletics were a bit more realistic for a lot of athletes in the area because of the difficulty to get into a school like University of Michigan or Michigan State.”

Growing up in Detroit, Hunter was able to see a rotation like the Detroit Tigers had during that time. Hunter told me “as a youngster I was blessed to be able to watch guys like Justin Verlander, Max Scherzer, Doug Fister, Joel Zumaya, Jeremy Bonderman and a lot of very talented arms.” I asked Hunter if he tried to model himself after any pitcher and he said “I tried to mimic multiple different styles as a kid in the backyard with my buddies playing waffle ball and I just wanted to be the most like JV.” Hard to sit here and think of a better pitcher to model yourself after than Justin Verlander.

After a dominant junior season in college, the Astros drafted Hunter in the 5th round out of Wayne State University in 2019. He got his feet wet with Tri-City striking out 33 in 23.2 innings. Unfortunately, like many other prospects, he was unable to play in 2020 due to COVID. I asked Hunter what he did during that time and he said “During the COVID off-season I was able to still go to my gym in Madison Heights and still get after it with my trainer Joe Neal. Luckily we had some pro guys in there like Paul Fry, Nick Plummer, Jack Weisenburger and Karl Kauffmann.”

With that much time off, there was plenty of time to work on specific things. I asked Hunter what he worked on during the missed season and he stated “I was really worked on my off-speed and had a very talented and experienced hitter in Nick Plummer and a guy with big league time in Paul Fry.” The time he put in has definitely worked though, as he is curveball has been nasty and led to many strikeouts this season.

Despite only throwing 23.2 professional innings, the Astros aggressively assigned Brown to Double-A to start the 2021 season. I asked Hunter about the assignment and what it meant to him and he said “starting in Double-A with the Hooks was a goal of mine heading into camp. It was really nice to see that we had similar beliefs in my abilities and its hard not to have confidence come from that but just like you said, I knew it was going to be a challenge.”

Hunter also added “spring training is a wonderful opportunity to get some good work in but there’s nothing like suiting up and going to battle against the opposition.” Hunter started the season walking walking 19 in 24 innings but has walked only 12 over his last 36 innings. I asked about that and he said “not to say guys were rusty but a year off of that real in game competition, it’s like you relearn yourself and how you have done things.”

I asked Hunter if the lower walk rate was about finding the zone or getting more comfortable and he said “I would agree that it has a lot to do with comfort but I’m sure I’ll have those games where I walk the house or give up a bunch of hits, just like anyone does. It’s a matter of how much distance you can put between those outings. Thats why these aces in the big leagues can do what they do, its all about consistency and that’s what Im learning as I go through this season.” He mentioned preparation and mindset as ways that have helped him be successful in 2021.

Lastly I asked Hunter about the journey from being drafted a couple years ago to being in AAA and on the cusp of the big leagues. Hunter said “as for these last two years, I use it as a testament to myself just how much hard work and determination can do for you. Coming out of high school I was consistently throwing 85-87, maybe touching 88-89 and now I can go out and sit 95 for an outing.” I asked it it was crazy being this close and he said “Absolutely, but you have to be present and control what you can control.”

Hunter has worked his way through the system and put together a great season in 2021 striking out 88 in 60.2 innings including a 2.50 ERA with 48 K over his last 36 innings. Hunter ended saying “I just try to be the best version of myself every time I take the mound and even when I’m not, I can learn from it and use to to get better so maybe that doesn’t happen again.”

With the kind of performance and talent that Brown possesses, it’s obvious why he will be on top 100 prospect lists when they are re-ranked. From throwing 85 MPH in high school with one college offer, to a 5th round pick, to a top 100 prospect in a matter of years. Hunter Brown has established himself as the Astros top pitching prospect and one of the best pitching prospects in baseball.