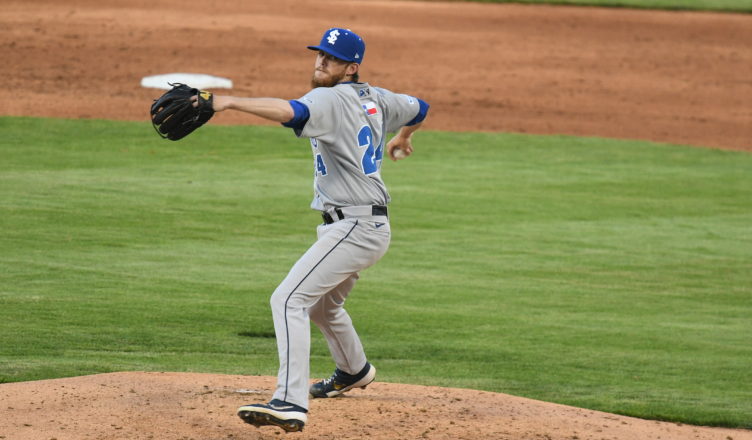 The Astros are consistently finding legitimate pitching prospects deep in the draft and we have seen that over and over. Another prospect in the pipeline now is Shawn Dubin who was a 13th round pick in 2018. Dubin had a breakout 2019 season where he struck out 151 over 110.2 innings with a 3.58 ERA. This year he is pitching in AAA where he has 27 K in 21.1 innings. I was able to chat with Shawn last week about his baseball joinery and other things. Let’s get to the interview!

Astros Future (AF): Started college career in Buffalo and then transferred to Georgetown College. How did that happen?

Shawn Dubin (SD): I grew up in New York, I went to a JuCo it’s called JCC (Jamestown) and tried to play soccer there, didn’t work out. Ended up taking a year off, worked for Lowe’s and then went to Erie Community College in Buffalo for a semester and then out of there I went to UB.”

SD: “It’s pretty cool honestly. It’s a super small college, it’s like 700 kids. It was the best decision I made going to that school and it ended up being a blessing.”

AF: You got drafted in 2018, and in 2019 you had a really good season striking out 151 in 110.2 innings. How was the transition from college ball to professional baseball?

SD: “It’s been a lot better. I’ve definitely came a long way, kinda cleaned some things up. Last year at the alt site was a pretty big year for me, I got a lot of exposure. I got a full summer of learning that stuff without playing in games.”

AF: No minor league season in 2020 but you were at the alternate site. Was there anything specific you worked on?

SD: “Yea just trying to get a little bigger, cleaning up the arm path a little bit. The year in Fayetteville I had my stuff was good but timing was a big thing for me like just getting too long of an arm so just trying to clean that up and consistently throwing more strikes.”

AF: I read a report that you added some muscle at the alternate site, like 20 pounds. Was like a bulking summer to just try and put on some weight?

AF: I know you have a high 90s fastball and plus slider. How would describe your stuff?

SD: “I think definitely fastball/slider are my two go-to’s, my curveball is actually come a long way. I don’t throw it against lefties a lot. Changeup I’m still trying to get the feel for it. I’ll get a good rep like every couple. Just trying to make that consistent. I like to think of my stuff is electric.”

AF: The Astros do a lot of the piggy back thing in the minors where you start some games and pitch in relief some games. Is there one where you feel more comfortable?

SD: “I like both to be honest. I see myself going either way. I feel like I could be a starter or I could come out of the bullpen for an inning.”

AF: If you were pitching in a one inning type of role, do you think your stuff would play up and what velocity would you be hitting with the fastball?

SD: “I think so. I think I might be able to get triple digits. I’ve never done it before but just knowing you have one inning to throw your best stuff would be awesome.”

AF: Based on your profile, the high velocity fastball and sharp slider, it seems like a spot you would have success in if you were in relief right?

SD: “Exactly. I think it works either way. As a starter I get to showcase all my pitches. I mean I still would out of the bullpen but I would rely more on the fastball/slider.”

AF: You pitched five games in May and then missed some time. What kind of injury were you dealing with?

SD: “It was a little bit of lateral forearm inflammation. Nothing major, just a nagging thing. It ended up being a little longer than expected but I just wanted to make sure I would come back strong.”

AF: Last question, it’s a two part question. What is your favorite TV show of all-time and what is your go-to fast food restaurant?

SD: “Tv show is probably “Two and a Half Men” I like the old reruns and then fast food wise probably Chick-fil-a. We don’t really have any back home in New York. The closest one is like an hour away so I try to take advantage of it while I got it.”

Thanks to Shawn Dubin for chatting with me last week and I look forward to watching him pitch the rest of the season.