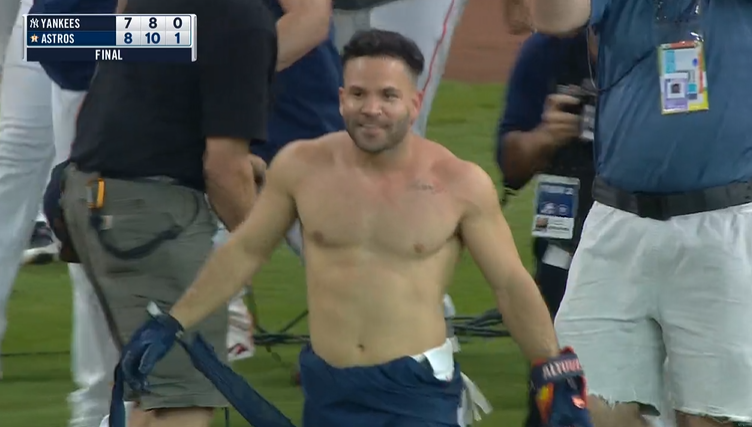 Remarkable First Half For Jose Altuve

The Astros are going into the second half with a 3.5 game lead and tied for the best record in the AL. While the team is stacked, this has been in large part due to Jose Altuve’s monster first half, and it’s been in ways that we haven’t seen before. Below will be a look at Altuve’s first half by the numbers but also his big moments so far in 2021.

Some of this improvement in walks and exit velocity can be due to the fact that he is swinging at the least amount of pitches outsize of the zone in his career. His O-Swing% (percentage of balls swung at outside of the zone) is at a career low of 28.5%. Altuve is also making contact with the highest percentage of pitches inside the zone (90.6%) since his MVP season in 2017. He has also been very good defensively posting a UZR/150 of 1.0, his highest since 2015.

May 6th vs NYY

Jose was struggling coming into this game hitting just .247 with 622 OPS going into this game. It was also his birthday. This was game three in NY after the Astros lost the first two and the Yankee fans were letting him hear it. The Astros went into the 8th inning down 3-2 but with two guys on, Jose did this:

That was only his second HR of the season. The fans were really giving it to him for two days and this shut them down immediately. Since that date, he has hit .288/.385/.555 with 19 HR, 46 RBI in 58 games. This HR got him and the Astros squad rolling!

Coming into this game the Astros were 37-28. A solid record but felt like more was coming. The Astros offense struggled and went into the 9th down 2-1. With 2 outs and 2 strikes, Correa tied it on a solo blast to right. The game went to extras and the Rangers went up 3-2 in the 10th. In the bottom of the 10th inning with the bases loaded, Jose Altuve came to the plate and did this:

Including that win, the Astros have gone 18-8 over their last 26 games. This started a run for Jose where he hit 3 HR over the next two games. Another epic HR for Altuve.

Last, but certainly not least, was the July 11th game against the Yankees. Once again, the Astros found themselves down 2-0 in the series. Even worse they found themselves down 7-2 going into the 9th inning. The Astros bats rallied to get 3 runs and with a man on first and third, Jose Altuve stepped to the plate. The following happened:

An epic blast from Jose Altuve, or as some call him, Yankee’s daddy. The best response to Judge and Sanchez’s acts after their homers. This ended the first half of the season on the perfect note. To cap it off, the Astros stripped Altuve’s jersey revealing that he did not have a freaking buzzer.

Jose Altuve. Man of many talents. MVP of Houston. The one who has been through it all. He is our leader. HE IS EL GIGANTE!