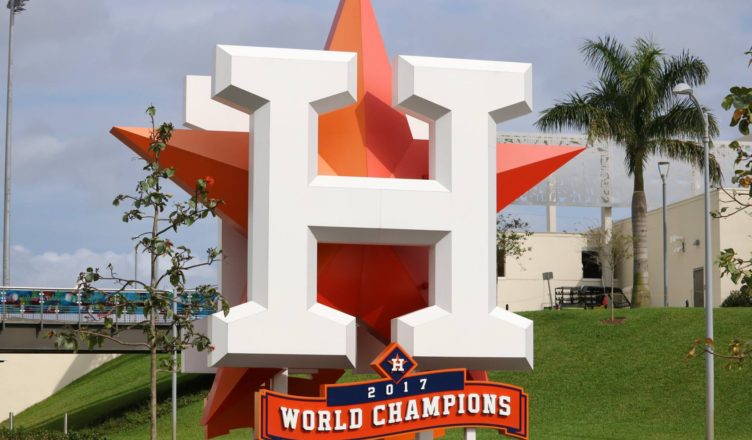 Astros Winners and Losers in Spring Training So Far…

With Spring Training about halfway over, we’ll break down who’s stand out thus far in Spring Training, and who has more to prove moving forward. The big league roster currently stands at 52 players, meaning only half of the guys currently with the team in Florida will be on the opening day roster.

Bryan Abreu – The 6’1″ 22 year old righty from the Dominican Republic has flashed his plus fastball and excellent repertoire of pitches thus far in Spring Training, fanning 12 batters over 6.2 innings of work, while giving up only 3 hits and 2 walks. He currently has a 0.00 ERA for Spring Training this year, earning high praise from Pitching Coach Brett Strom: “He can be an exceptional major-league starting pitcher.” While he didn’t include Abreu in the short list of guys to secure the number 5 role out of the gate this year, it’s become increasingly apparent that Abreu has a golden opportunity to carve out a role in the bullpen or possibly even the rotation this season. At just 22 years old, he has a ton of room to grow under one of the game’s best pitching staffs.

Josh James – James came into Spring Training highlighted as one of the three potential hurlers to lock down the fifth spot in the rotation. At just halfway through camp thus far, it appears he has the inside track at locking down the position, with Framber Valdez a close second and Austin Pruitt a distant third. To date, James has fanned 5 over 5 complete innings of work, giving up only 1 hit and 0 walks. He has been nothing short of impressive thus far, and the Astros will likely opt for a veteran option in the rotation to start the season while they continue to develop Abreu, while also giving him meaningful innings. If James continues this pace, it’s likely his to lose.

Framber Valdez – Yes, there is a theme here for Spring Training. The outstanding pitching performances by Valdez, James, and Abreu have given Baker and Strom a lot to think about, and since election szn is upon us, we’ll declare the race “too close to call”. The 26 year old lefty has struck out 9 over 6.2 innings of work, only giving up 3 hits. The slightly concerning number here is the 3 walks he’s issued thus far in 2020. He’ll need to continue to hone in on the command of his pitches or he could get himself into trouble early, something he dealt with in 2019. The positives here is he has one of the best spin rates on his curve ball, which graded out in the 97th percentile. On Valdez’s curve alone, opponents hit only .118. In 93 AB’s, he has logged 57 strikeouts on that pitch alone. That is elite in terms of what you look for out of a secondary pitch.

Blake Taylor – Acquired in the trade that sent Marisnick to the Mets, Taylor has quietly had a great Spring Training thus far. He has struck out 7, given up 0 runs, and only allowed 3 hits in 6.1 innings of work thus far. The knock on him to this point, like Valdez, is command of his pitches. He’s given up 5 walks thus far, and when you’re fighting for a role out of the pen, the last thing you want to do is come into a game in a tight situation and put free runners on base. He’ll have to continue to work to cut down on the number of guys he puts on, but he has a better chance at making the roster now versus the start of Spring Training.

Taylor Jones – Jones, the 6’7 first basemen prospect, is ranked 28th in the Astros top 30 prospects. In Spring Training thus far, he’s slashing .353 over 17 AB’s, with 3 of his 6 hits being XBH’s. Jones has made solid contact with the ball throughout camp, while he has yet to hit any HR’s, the evident power from his large frame is there. He’ll have to cut down on his strikeouts (7), but I believe that will come with time and more reps at the plate. Springer has 8 strikeouts over 21 AB’s, so the alarms shouldn’t go off, just yet. Jones won’t make the roster out of the gate, but he’s solidifying himself as a player who could take over in the next year or two as the first basemen of the future. He will be a player to watch as he (hopefully) progresses through the farm system this year.

Myles Straw – Straw has been tearing the cover off the baseball at the plate this Spring. In 16 AB’s, he’s hitting .313 with 3 HR’s, 4 RBI’s, and reached base a total of 8 times. With his performance in camp, along with his speed and positional versatility, I believe he’s solidified himself on the 2020 opening day roster. He’s playing his way into a 2nd utility role with the club this Spring, and the development of power (0 HR’s in 2019 over 108 AB’s) has been a pleasant surprise.

Garrett Stubbs – Fighting for a spot with the big league club this season, Stubbs currently has 5 hits over 8 AB’s with 1 HR and 2 RBI’s. While he’s likely still behind Maldonado, who’s only hit .125 in the same amount of AB’s thus far, he’s in the race for the 26th spot on the roster. The battle between him and Straw will be one to keep an eye on for the rest of the Spring. In any case, it’s almost certain that we’ll see both of these guys with the big league club throughout 2020.

Abraham Toro: Suffice to say, Toro has not started the season off as well as what he hoped for. In addition to dealing with pink eye, Toro’s had 18 AB’s this year, and only 2 hits thus far this year. A reason for optimism is with only 1 strikeout, he’s been putting the ball in play, which is all you can really ask for. While the average isn’t there (yet), he has enough time to turn it around. It’s baseball, it happens, but for a guy hoping to make the club out of the gate in 2020, the door is starting to close.

Ronnie Dawson – There’s not very many positives you can find in what Dawson has displayed so far in 2020. In 14 AB’s, he has only 1 hit, 2 RBI’s, and 7 strikeouts. The former 2nd round pick out of Ohio State is buried on a crowded outfield depth chart, and needs to continue to develop to show the staff that he’s capable of being a contributor at the next level. Fortunately for him, Brantley, Reddick, and Springer’s contracts all expire after this season. It’s extremely unlikely all three return, so he could get his chance with the club in the future, but will need to work on his plate discipline in the meantime. The potential is there for him to be a 20/20 guy, so if the Astros do lose Springer and/or Brantley, the club will hope that he can become a part of that rotation in the outfield.

Forrest Whitley – Putting Whitley in the “losers” column doesn’t exactly feel right. It doesn’t feel right not mentioning him either, so he “earned” a spot here. The chances of him earning a spot in the rotation out of the gate weren’t exactly there to begin with, but after 3.2 innings of work, those chances are gone. Thus far, Whitley posted a 7.32 ERA, giving up 2 hits, 2 walks, and striking out 5. The stuff is there, and you have to give him the benefit of the doubt after an injury plagued 2019, but at some point he has to match the potential with production. The command of his pitches simply isn’t there yet, but his stuff is apparent, with his fastball topping out at 97 mph. The Astros are wise to continue to bring him along slowly, and he’s still a top notch prospect in the farm system, but he needs to find a way to put it all together sooner rather than later.

Jack Mayfield – Another utility man battling for a spot with the 2020 club, Mayfield hasn’t done much this Spring to make the case for him occupying a roster spot on opening day. In 19 AB’s, he has only 3 hits with 0 RBI’s and 4 strikeouts. With Aledmys Diaz already penciled in to the utility man/Marwin Gonzales role, and Myles Straw red hot, there really isn’t a place for Mayfield on the roster at this time. Again, there’s still a ton of time for things to change, and giving the benefit of the doubt, some of these guys haven’t seen live pitching since the beginning of September or end of August. However, when you’re fighting for a roster spot in front of an almost completely brand new coaching staff, you can’t afford to let the few opportunities you get pass you by. As a former undrafted free agent, Mayfield knows this all too well and will hope to catch fire in the back half of Spring Training, but his door on opening day is closing.

Jeremy Pena – Last week, I wrote about Jeremy Pena and his potential to impact the club in 2020 or possibly even 2021. As of now, his 2020 major league outlook (at least to begin the season) is bleak. In 14 AB’s this Spring, he has only 1 hit to go with 9 strikeouts. At just 22 years old, this is a time for him to develop and grow from prospect to product, so it’s not a big deal. However for Pena, he’s going to have to put a lot of time into the development of his swing. He’s being afforded a great opportunity to see upper level pitching, and the repetition is invaluable for his development.

The Starting Rotation – I’ll start with Jose Urquidy. I know, stats don’t tell the full story. In Urquidy’s most recent outing, he came out of the pen against the Cardinals and tossed three scoreless innings while striking out four. However, he came into the game and pitched innings 5 through 7, so you have to wonder about the level of competition he was facing. However, he still has the outstanding 2019 postseason to his benefit. In 8.1 innings this Spring, he’s given up 10 hits en route to a 5.40 ERA. That’s not quite what you want out of your presumptive fourth starter. In addition to Urquidy’s early struggles, Justin Verlander went down with a lat strain and is being shut down for a bit. He’s also dealt with groin tightness throughout camp as well. JV is a warrior, and it’s way too early to sound the alarm on his 2020 campaign, but at 37 years old, you have to wonder how his body will be able to hold up. Last year, he threw 223 innings (most in baseball) over 34 games (tied for most in baseball) and averaged 6.5 innings per game (again, most in baseball). That’s a lot of innings that he ate up that gave guys in the bullpen extra rest, if that number dips, Strom and Baker will have to dip into a bullpen more than they did last season. With a rebuilt pen from last season, a lot of games within reach will rely on unproven guys to keep it close. By doing so, you’re asking guys like Devo, Pressly, and Osuna to contribute a lot more than usual in key spots.

All told, the Astros will have some tough decisions to make to bring their current roster down to 26 from 52. We’ll continue to watch key position battles as they unfold, and hope that we can enter 2020 with a healthy squad.

View all posts by Tony Williams →