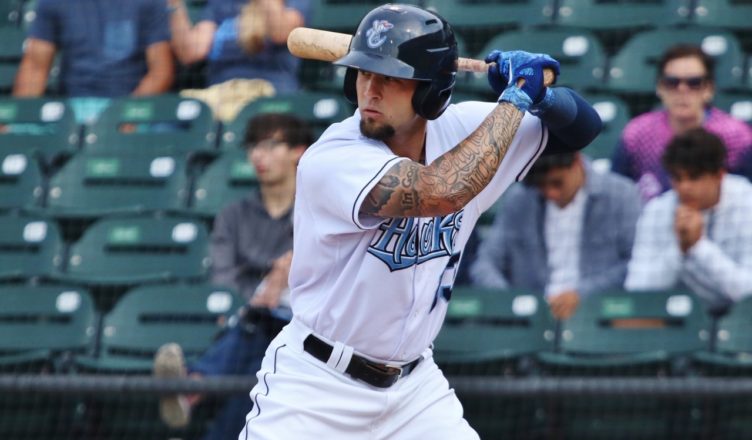 Now that 2020 is here, it is time to start looking at the top three prospects at each position as we lead up to the Astros top 30 prospect list. Helping me with these lists is Spencer Morris (@prospect_spencer). This week we will look into the first base position.

Early in his pro days Jones largely struggled, but had encouraging strikeout and walk rates, and showed signs of a breakout in Double-A in 2018, hitting .314/.409/.528 for Corpus with 13 home runs. Jones was notably old for the level at age 24, but given his lack of experience as a hitter compared to his peers, his advanced age was a bit less concerning than it would be typically. His upward trajectory continued into 2019, when he clubbed 27 home runs across Double and Triple-A, with 22 of those coming in Round Rock. After hitting 15 home runs across 2016 and 2017 in the pros, Jones appears to have made the necessary adjustments to tap into his considerable raw power, and should get a chance to prove he has a future as a big league bat in 2020. He’s more or less ready to go and would likely be first on the list for a call-up if the Astros suffered an injury to a corner type.

J.J. was drafted by the Astros in the second round of the 2017 draft. Although he played second base in college, during the draft process scouts questioned where he would play in the pros, but his bat was the calling card. During his junior year in college he hit .383 with 30 2B in 59 games. He has had an up and down minor league career so far. He had a good year in 2018 and was poised for a big 2019 but he received a 50 game suspension for violating league rules pertaining to drugs. He came back to the Hooks after the suspension and posted a .759 OPS with 16 2B, 7 HR, and 28 RBI. Overall he had a .761 OPS with 22 2B, 11 HR in 78 games. Matijevic has plus power but needs to make more contact moving forward. He will be 24 for the 2020 season but still has a high ceiling.

Rivas was signed out of Venezuela by the Angels in 2018 for $200,000. He was eventually acquired by the Astros in the trade that sent Max Stassi to the Angels. At the time of the signing, he was already well built standing at 6-3 and 200 lbs at just 16 years old. Rivas has plus power and has shown a patient approach and the ability to have quality at-bats. Baseball Reference now has him listed at 6-3 and 220 lbs. He isn’t a great athlete so first base or corner outfield is his landing spot. He started 2019 in the DSL but made his stateside debut in the AZL and GCL. Overall he slashed .344/.429/.471 in 44 games. He is only 18 years old and doesn’t turn 19 until June.