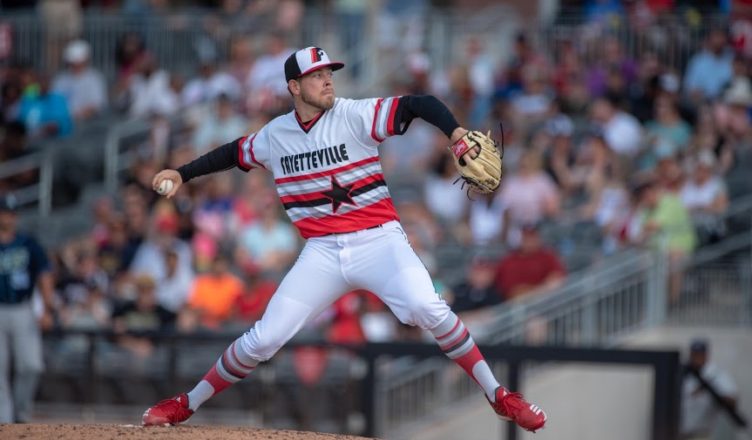 It’s been a while since I’ve done an interview, but with the success of some of the lesser known prospects in the system, I figured it was a good time to get to know some of these guys better. Let’s get to know Brett Conine!

The Astros have ways of taking underrated pitchers in college and turning them into legit prospects. They did this again with Brett Conine. Conine was drafted by the Astros in the 11th round of the 2018 draft out of Cal State Fullerton. Conine was a reliever in college and actually had a really good sophomore season with a 1.39 ERA in 45.1 innings.

This gives him the following overall line this season:

Conine was able to take some time and answer some questions. Now let’s get to the interview!

Brett Conine (BC): “The Draft was going on during the NCAA tournament and we (Cal St. Fullerton) were about to host a Super Regional. So we had meetings and practices leading up to that. And it was after one of our early morning meetings (on the third day of the draft) that one of my teammates who was following the MLB Draft on Twitter shared with me that I was drafted by the Astros (in the 11th round). Cool experience to be shared with my teammates.”

AF: What led to your decision to sign with the Astros rather than go back to school?

BC: “Getting drafted has always been a dream of mine and to have this wonderful opportunity come to me, was one that I couldn’t pass on. School was put on hold and I intend on finishing.”

BC: “With the Angels being only a 10 minute drive away, naturally I grew up rooting for them. But as I got older I was more of a Padres fan. San Diego is a beautiful city and Petco Park is one of my favorites.”

AF: Is there a certain pitcher you try to model yourself after?

BC: “No, not necessarily. There are too many pitchers to name that have been successful in this game and they’ve been successful because they know what they do best and they’re consistent. That’s what I’m in the process of right now, working on being the best version of myself and trying to be as consistent as I can.”

AF: How has the transition been from reliever in college to starter in the pros?

BC: “I think the transition from reliever to starter has been going well. In the end pitching is pitching, but I enjoy how things have panned out. Having some experience in both roles is always a good thing.”

AF: What do you feel you have improved the most this season?

BC: “I’ve been pretty happy with how my pitch development has been going. I came in with two pitches from college and now i’m working with four. It’s a good feeling when you can go out to the mound with more than two pitches.”

AF: Everyone know the Astros love analytics (spin rate, exit velocity, pitch tunneling). How have you been able to use this to help you on the mound?

BC: “The Astros do a great job with their player development and they have given me plenty of feedback on ways to improve everyday. The detailed focus we put on everything is what helps us become the best we can.”

AF: Can you describe your repertoire and what do you think is your best pitch?

BC: “I’m currently developing a four pitch mix between my fastball, change-up, curve ball, and slider. I think the improvement of my change-up is what i’m most proud of. But it’s important as a pitcher to have confidence with all of your pitches.”

AF: Switching gears a bit. Quad Cities dealt with a lot of flooding in and around the park in Davenport earlier this year. How did you and the team deal with this and still play at an extremely high level?

BC: “Baseball is gonna be baseball. It was different being on the road for that long of a stretch, but we just went out there everyday and played the game that we know how to play. We tried not to focus on the extended amount of traveling too much and we definitely weren’t going to make any excuses. What an experience.”

Thanks again to Brett for taking some of his free time to answer some questions. I look forward to watching him more this year. Good luck the rest of the season, Brett!