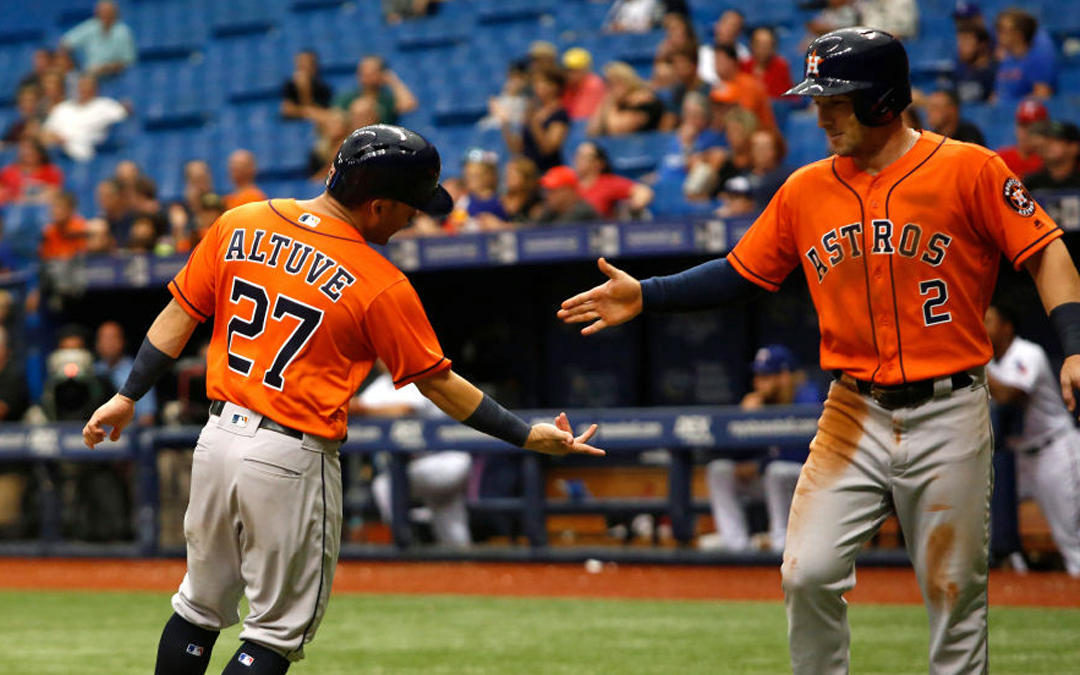 In a three year span, massive changes can be made to everyday batting lineups. Take for instances the Houston Astros. In 2019, the Astros possess one of the most prolific lineup the game of baseball has ever fielded, but 3 years ago on this date, May 22, 2016, the Astros fielded a much different looking lineup. In a 9-2 loss against the Texas Rangers, the lineup card looked like this:

Right off the bat, a noticeable name is missing from the leadoff spot; George Springer. Springer didn’t get the permanent move to the top of the lineup until two days later on May 24th. Another noticeable omission is Alex Bregman, the $100 Million hot-corner manning phenom who would earn a call-up in 2016, but not until after the All-Star Break on July 25th.

A few more recognizable names on the list are no longer with the Houston Astros. Colby Rasmus and Jason Castro would be free agents at the end of the year, as well as Evan Gattis and Marwin Gonzalez after the 2018 season. Colin Moran and the late Luis Valbuena would also appear in the game as pinch hitters, Valbuena eventually leaving after the season and Moran would be shipped off to Pittsburgh in the trade that would bring Gerrit Cole to Houston shortly before the 2018 season.&nbsp;

In just a three year span the Astros lineup has seen 6 players come and go, proving that even in a perceived short amount of time, big changes can be made. So three years from now, what will the Astros’ 2022 lineup like like?

For starters, the contracts of Robinson Chirinos, Yuli Gurriel Josh Reddick, George Springer, Carlos Correa, Michael Brantley, and Jake Marisnick will all be up before the start of the 2022 season, so big decisions will need to be made, especially regarding Springer and Correa. For this hypothetical, however, we’re going to assume every player eligible decides to elect to go the route of free agency. That means a lot of spots will be up for grabs in 2022, so without further ado here’s the projection for what the lineup could look like in 2022, along with the age they’ll be in 2022:

Alex Bregman and Jose Altuve are both locked into contract extensions that will keep them in Houston through the 2024 season. Both will be entering the 3rd season of their new contracts, Bregman’s being 6 year, $100M contract, Altuve’s a 5 year, $151M. Altuve will be on the wrong side of 30 but most likely still showing the same MVP type bat we’ve become accustomed to while Bregman will be entering the prime of his career at the ripe age of 28. Both will be mainstays in the lineup for the foreseeable future.&nbsp;

In the 2012 Draft, the Astros passed on the phenom OFer from Georgia at #1 overall to draft and sign an under-slot deal with a 17 year old SS from Puerto Rico, a move that helped them secure a high school righty named Lance McCullers. Welcome to the world where the opposite is now true. Carlos Correa will be leaving the Astros after a legendary tenure that saw the Astros win the 2017 World Series (and potentially more?). In the same offseason, the Astros will sign the speedy Byron Buxton in a weird 2012 draft level of mis-remembrance. Buxton is coming into his own with the Twins, and by the time free agency strikes in 2022, Buxton should have it all figured out. With Marisnick and his glove now gone, the Astros will sign the fastest man in baseball to man CF.

Accompanying Buxton will be the man they call Krush Davis. Recently Davis signed an extension with the Oakland Athletics to stay with the A’s through the 2021 season, sighting that he wants to stay in Oakland. By 2022 though the Astros will be looking for a power bat to crush HRs into the Crawford Boxes, and even at age 34 Khrush Davis should still be a valuable commodity.

It’s almost a given that Luhnow will make a trade for a bat sometime in the next three years. With Correa gone and Alex Bregman slated to slide over to SS full-time, the hole at 3B is glaring. Freudis Nova looks to be ready for a call-up by then, but finding an experienced veteran could be a necessity. That’s where Eugenio Suarez comes in.

Granted, three years from now it’s hard to peg who is going to be buying and selling. The Reds are going to hope to be contending in the NL Central by 2022, but should they not be Suarez looks like a piece that could get them back some assets. Suarez’s 3B profile as a lefty power bat is enticing for a team like the Astros. Last season he finished with over 30 HRs, 100 RBIs, 134 OPS+, and was just shy of being a 4 WAR player. Though he may have more swings and misses than the Astros are presently accustomed to, acquiring Suarez on his team friendly 6 year, $66M contract that will only be in year three heading into 2022 would be a great spot to start when looking to find Correa’s replacement.

The New Kids in Town

Some people might cringe when thinking of a future lineup that would be dependent on four prospects, three of which have yet to make their debuts, mainly because no prospect is a sure thing. But for the Houston Astros and their ever-replenishing farm system, apprehensiveness may not be necessary. Yordan Alvarez and Kyle Tucker represent two of the very best the system has to offer. Assuming both are called-up sometime in the next 12 months, the Josh Fields trade piece and the former #5 overall pick respectively will be entering their 3rd season, both at age 25, and looking to prove their blue-chip prospect rankings correct.

For Seth Beer, last year’s first round pick at #28 overall, his call-up may not be too far away either. Not even a year removed from college, Beer has already reached Double-A thanks to his brilliant contact and power and his advanced eye at the plate. Stubbs may not be an everyday starter at the Major League level with his bat, but recent years have seen catcher offense trending down so long as they can handle the defensive aspects of the position.

Three power bats in the future lineup in Alvarez, Tucker, and Beer, as well as three players who will consistently put the ball in play. That’s about as good as you’re going to get out of your top three position prospects. The defense may take a hit, but rest assured the lineup will continue to be one of the more high-powered ones in baseball.

As far as bench bats go, Aledmys Diaz will be 31 but will be a free agent after 2022, giving Freudis Nova, a SS with a bazooka for an arm, a chance to come up and be the utility man on the roster, and he can compete with Josh Rojas for this role. Myles Straw will be the 4th OF and a guy that will occasionally earn starts when Hinch decides to give someone the day off. There’s also no way to even guess at who the backup catcher could be in three years time. In the last 3 seasons the Astros have penciled in Jason Castro, Erik Kratz, Martin Maldonado, Brian McCann, Max Stassi, Juan Centeno, Tim Federowicz and Evan Gattis behind the dish. In other words, throw a dart at the list of catchers across college and professional baseball, and there’s your backup catcher.

Future Lineups are hard to pinpoint because of numerous factors. In any given year free agents, opt-out candidates, trade discussions, prospect call-ups and players who might not even be drafted yet can factor into what a lineup will look like. The Astros have proven now they are willing to spend the money to keep parts of the team together, so who’s to say a player penciled to walk in a few years won’t sign an extension to stay with the Houston franchise.

One thing is for sure though, the Astros’ postseason window does not close with a few players electing to leave, but rather are built for the long haul in both the Big Leagues and in the farm system. The front office is committed to keeping key players in the clubhouse, but are also standing by, ready to weather some hits to the roster by whatever acquisitional means necessary to bring talent to the Houston Astros. Will this lineup come to fruition? Overwhelming odds say no, but you can bet the farm (pun intended) that the Houston Astros will be around to contend for years to come.