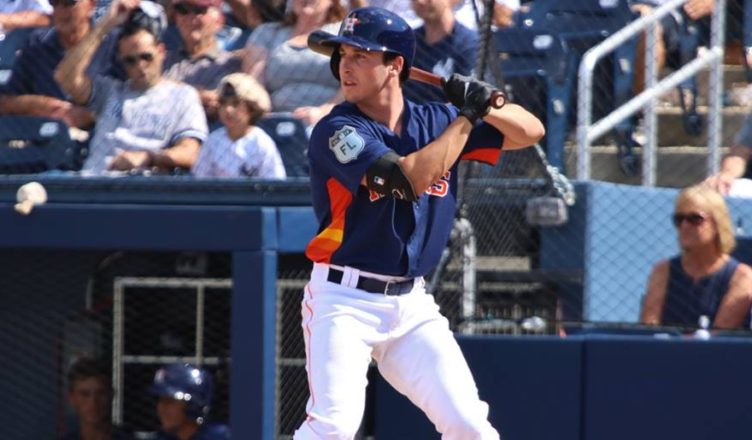 Pena was drafted by the Astros in the 3rd round of the 2018 draft. While many shortstop prospects in college end up moving off the position, Pena looks like a lock to stay at short. He has good speed which leads to good range and possesses a plus arm. He played in 36 games following the draft and showed some ability hitting .250 with 18 BB/19 K. He doesn’t have a ton of power but being able to stick at shortstop and be a plus defender there is huge. He should be able t o work his way through the minors by getting on base and playing great defense.

Adolph was recently acquired by the Astros in the JD Davis trade. Adolph was a 12th round pick by the Mets in the 2018 draft. He played in short season ball in 2018 but showed his ability posting a .857 OPS with 9 2B, 12 3B, 7 HR, 14 SB and a 147 wRC+. It appears the reason he fell was some past medical history but he was healthy this past season. He has plus raw power and speed. I haven’t been able to watch him but after reading reports, he seems to be a very good athlete and has a chance to stick in center field. The Davis trade looks like a solid one on paper right now.

McKenna was drafted by the Astros in the 4th round of the this year’s draft. He put together a solid showing in his Astros’ debut. Following the draft he played for Tri-City and had a .958 OPS with 7 2B and 5 HR in 32 games. The Astros then moved him up to Quad Cities where he had a .772 OPS in 12 games. Overall he had a 164 wRC+. McKenna has solid power and is a good runner. He has plus instincts and quickness in center field which should help him stick there. He will be a fun prospect to watch next year as he plays a full season in the system.

Heading into the 2017 draft it looked like Perez would be drafted as a pitcher, though some teams stayed away from him due to his impending Tommy John surgery. The Astros announced him as a third baseman on draft night and have since stated they plan to have him play in the field. Perez has good power and the Astros believe he will hit for both average and power while having a plus arm at the hot corner. He missed the 2017 following the draft but made his debut in 2018. Unfortunately he only played in four games due to some nagging injuries. He has a very high ceiling.

Stubbs was drafted by the Astros in the 8th round of the 2015 draft. He was drafted as a solid defensive catcher but has made improvements with the bat. He has steadily moved through the system and had a solid season in 2018. In 84 games for the Grizzlies he hit .310 striking out just 53 times. He also caught 19 of 42 base stealers for a 45% caught stealing rate. Overall he had a 120 wRC+ with a solid 10.3 BB%. He will probably make his major league debut sometime this season. Stubbs is 25 years old but is a solid depth piece for the Astros right now. A guy who can be good defensively behind the plate and make contact with called upon.

The Astros acquired Bailey in the deal that sent Laureano to Oakland prior to the 2018 season. Bailey pitched the majority of the season in Buies Creek and was arguably the ace of the staff. He had a 2.49 ERA with 113 K in 97.2 innings. He dominated in the second half of the season posting a 1.31 ERA with 8 BB/45 K in 41.1 innings. He also pitched in five games for the Hooks striking out 23 over 24.2 innings. Bailey has a fastball with late life and a very good 12-6 curveball. He fits the mold of a Collin McHugh like pitcher that the Astros fall in love with. His is smaller, and may end up the bullpen, but he should make it to the MLB at some point.

Solis was signed by the Astros out of Venezuela in 2016. He has all the makings of a top pitching prospect but, unfortunately, he had Tommy John surgery late last year and will likely miss all of the 2019 season. In 2018 he made his full-season debut at just 18 years old but held his own striking out 51 in 50.2 innings and posting a 3.55 ERA. He has a fastball that sits in the mid 90s, a good curveball, and a developing changeup. Despite the surgery, he will return in 2020 at just 20 years old and still one of the highest potential pitching prospects in the system.