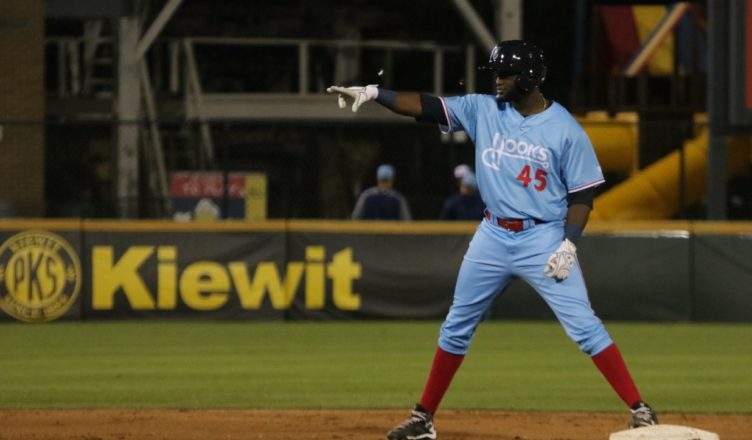 Now that 2019 is here, it is time to start looking at the top three prospects at each position as we lead up to the Astros top 30 prospect list. This week I will look at the left field position. Placing outfielders in certain positions is tough but I will do my best.

The Astros got a steal in Alvarez when they acquired him from the Dodgers in a trade for Josh Fields. Alvarez had a breakout 2017 and continued to see his stock as a prospect rise in 2018. He got off to a great start hitting .299 with 8 2B, 6 HR, 26 RBI in his first 27 games but then missed about a month dealing with a hand injyr. He came back in mid June and finished his time in AA hitting .325 with 12 HR, 46 RBI and 168 wRC+ in 45 games. He was promoted to AAA where he had a .801 OPS with 8 HR in 43 games (111 wRC+). Overall he had a 139 wRC+ as a 21 year old between AA and AAA. Alvarez is huge (6’5″, 225 lbs) but actually moves around really well. I think he has a chance to stick in the outfield and it looks like that is the plan so far. He has monster power and has improved his plate discipline. He was ranked the #34 prospect in all of baseball by Baseball America.

Matijevic was the Astros 2nd round pick in 2017. Scouts were unsure where he would play but it looks like the Astros are set on him being an outfielder at this point. Matijevic put together a really solid 2018 season. He started the year in Quad Cities but make quick work hitting .354 with 10 XBH in 13 games. He spent the rest of the year in Buies Creek and showed off his power with 20 2B, 19 HR in 88 games (.513 SLG). Overall he posted a respectable 10.2 BB% and a very good 147 wRC+. He generated some great exit velocity this season and really showed off the power stroke. Reports are down on his defense a bit but his bat should be able to carry him.

Julks is a local product drafted in the 8th round of the 2017 draft out of the University of Houston. He started the year in Quad Cities playing in 64 games and hitting .259 with a .720 OPS. He was promoted to Buies Creek and his numbers actually improved. In 61 High-A games he hit .282 with .820 OPS. Overall he finished with 30 2B, 30 SB, 10.6 BB%, and a 120 wRC+. Julks is good athlete and should provide solid defense in the corners. He has some power, draws some walks, and steals bases. 2019 will be an interesting year for him as he moves up to AA.