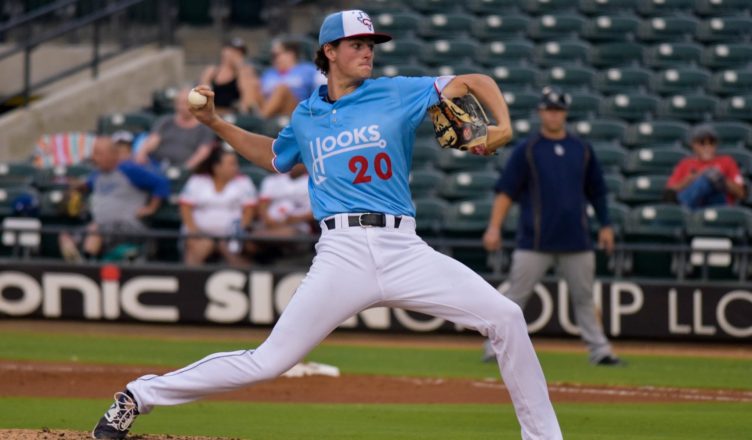 Most Astros fans have heard the name Forrest Whitley before. But let’s dive in and learn a bit more about Houston’s top prospect. Forrest is a native Texan out of Alamo Heights High School in Alamo Heights, TX. He originally committed to play college ball for Florida State University but thought better of it when the Astros made him the 17th overall pick in the 2016 draft. Whitley’s selection went against the organization’s grain a bit as Lunhow and staff generally stay away from high school pitchers. But the 6-foot-7 right-hander was too good to pass on.

Forrest features a mid-90s fastball with a plus slider and a plus changeup. In 2017, his first full season in pro ball, he lit the minor leagues on fire reaching AA by the end of the year — joining a shortlist of pitchers to accomplish this feat including Clayton Kershaw and Zack Greinke. Whitley’s full 2017 numbers across three levels (A Quad Cities, A + Buies Creek, AA Corpus Christi) were impressive: 92 IP, 2.83 ERA, 34 BB/143 K, 13.9 K/9.

After a stellar 2017, the Astros’ top prospect seemed to be on the path to contribute to the big league club’s 2018 title defense. However, Whitley was hit with a 50 game suspension to start the 2018 campaign as the result of a violation of the Minor League Drug Prevention and Treatment Program. Whitley showed why he is a legit #1 prospect upon his return from suspension. In his first 3 starts of 2018 after suspension he went 12 innings, 0 ER, 3 BB/18 K, and allowed only 5 hits. Unfortunately, more bad news came in early July 2018 when Forrest suffered a lat injury that sidelined him for a little over a month. This injury was the bigger blow to Whitley’s chances to pitch in the big leagues in 2018 as the Astros were understandably cautious with their top prospect and didn’t want to rush him into anything and risk further damage. He did end up pitching again late in the 2018 season, but for the Hooks not the Astros.

Due to his missed time in 2018, the organization decided to send Forrest to the Arizona Fall League — a prestigious league where top prospects go to get ready for the big leagues. Jeff Lunhow seems impressed by his top prospect’s performance so far.

Look for Forrest Whitley to make his Major League debut some time in 2019, provided he stays healthy. He is a legit #1 prospect with top end stuff who could impact Jeff Lunhow and staff’s decision making this offseason. If all goes right, Whitley could have a huge impact for the Astros in 2019.