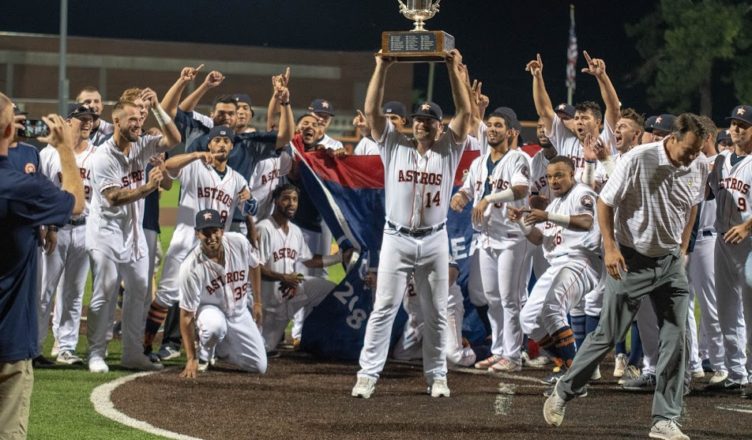 Buies Creek followed up a solid 2017 season with an even better 2018 season. They dominated the majority of the season and ended up winning the Carolina League Championship. Here is a review of the season Buies Creek put together.

There were several players that did make an impact, as is the case every season. J.J. Matijevic was a key contributor for Buies Creek as he had 20 2B and 19 HR in 88 games. Josh Rojas started with Buies Creek and had a .921 OPS before being promoted to Corpus Christi. Corey Julks, product of U of H, hit .282 with .820 OPS in 61 games for Buies Creek.  Abraham Toro-Hernandez started the season in Buies Creek and had 14 HR, 56 RBI and a .834 OPS in 83 games. Ronnie Dawson lead the team in stolen bases despite being promoted to Corpus Christi later in the season.

J.J. Matijevic, OF
Matijevic was drafted by the Astros in the 2nd round of the 2017 draft. He struggled a bit following the draft but had a very good 2018 season. He started the year with Quad Cities and hit .354 in 13 games before being promoted to Buies Creek. Matijevic played in 88 games for Buies Creek and showed off good power hitting 20 2B and 19 HR for a .513 SLG.

Brandon Bailey, RHP
The Astros acquired Bailey in the deal that sent Laureano to Oakland prior to the 2018 season. Bailey pitched the majority of the season in Buies Creek and was arguably the ace of the staff. He had a 2.49 ERA with 113 K in 97.2 innings. He dominated in the second half of the season posting a 1.31 ERA with 8 BB/45 K in 41.1 innings.

The Astros won’t be in Buies Creek next year as they are moving in to their permanent location in Fayetteville. Seth Beer could be a guy who starts back in High-A, but the Astros could be aggressive with him too. Peter Solomon will most likely start in High-A and will look to build on a great 2018. Corey Julks and Jake Meyers may give Fayetteville a couple exciting outfielders to start the season. Chad Donato and Parker Mushinski appear to be headed for Fayetteville and could anchor their pitching staff.