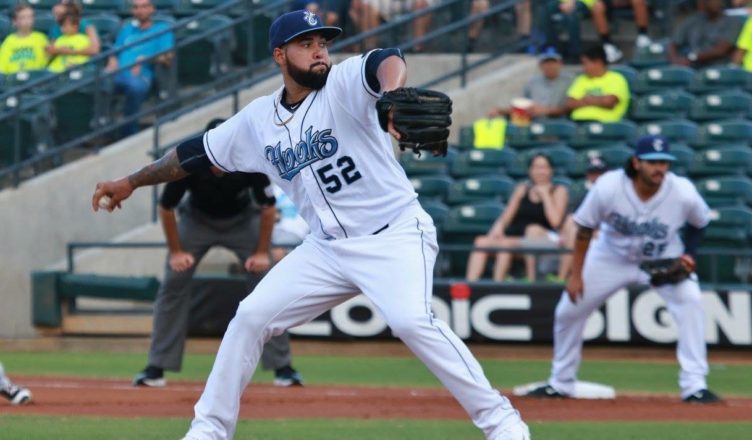 Date seen:  04/14/2018….  Yoanys Quiala is a 6’3 235 pound RHP signed as a free agent, by the Astros, in June 2015.  The Cuban native is in his age 24 season and started the season with Corpus Christi after splitting 2017 between High A and Double A.  Barrel chested and broad throughout, Quiala possesses a sneaky athletic delivery. It is fluid with good tempo and he repeats it consistently.

The fastball was a tick above average at 93-95 with late zip and some arm side run.  He has the ability to boar it in on RHH and crash it away from LHH, and he kept it off the barrell for 4.1 innings, on this night.  Quiala threw a slider at 84-86. The pitch has some depth and lateral tilt, but it is not a plus offering. It tunnels well with the fastball and creates problems for RHH.  In situations where he had to have swings and misses, he went FB/SL.

Quiala flashed a changeup early in the outing, at 82-84 but abandoned it.  He also threw a curveball in the upper 70’s but also abandoned it in crucial situations.  These two secondary pitches appeared to be in the developmental stage as he offered them in low leverage situations early on this night.

Athletically, Quiala will surprise you.  Fastball velocity did not suffer when in the stretch and he showed nimble feet when having to move to the right side on a ground ball.  He does not appear on any top prospect lists but could very well develop into a bullpen option with his plus fastball that hitters struggle to square up.

View all posts by Mike Robbins →