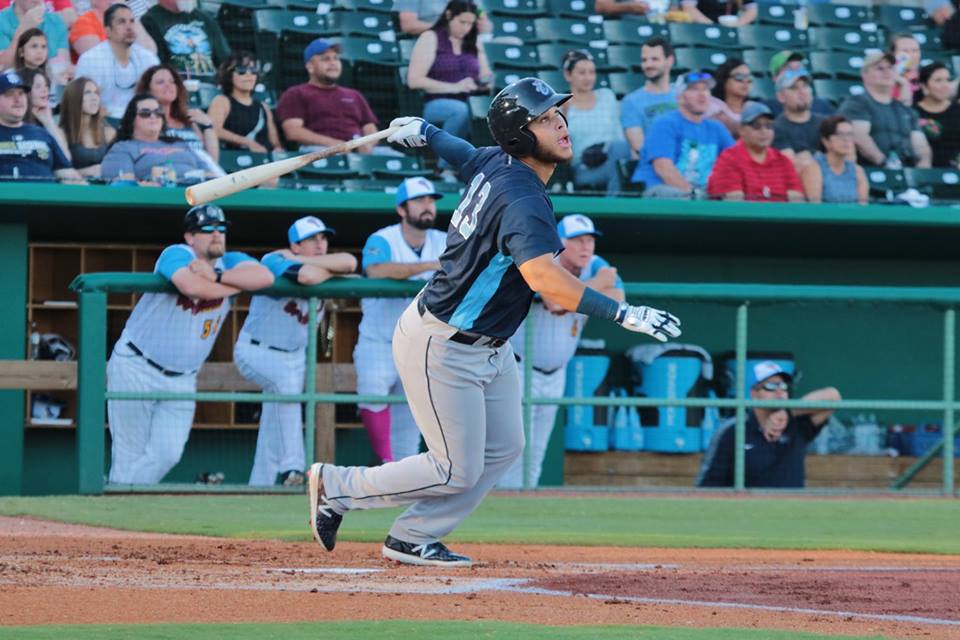 The Corpus Christi Hooks are on a little bit of a run.  They have won seven out of their last 10 and now sit two games behind the San Antonio Missions, for first place in the Texas League’s South Division.  The success is largely due in part to some serious offense by several of the Hooks players, and of course some serious pitching.  Infielder Randy Cesar led the way earning him Astros Future Player of the Week honors.

Cesar, who is currently riding a 13-game hitting streak, ended the week going 12-for-26 (.462), with two home runs, 11 RBI, and five runs scored.  During his streak, his batting average has risen from .303 to .340 which is good for fourth in the Texas League.  His 11 RBI brings his total to 29 for the season and that moves him into the top five in that category as well.  The videogame numbers keep coming when you break it down a bit further during this streak.  Six of the 13 games, Cesar has multiple hits including two in each of his last three games, and a four-hit outing on May 16th against the San Antonio Missions.  He has a five-game multi-RBI streak going on currently as well.  To say that he is hot at the plate is an understatement.

The Houston Astros signed Cesar in May 2012 out of the Dominican Republic as a 17-year old.  Since that time he has progressed through their system making stops at every level and continues to put up numbers worthy of continuing his ascent to the majors.  With traffic jams at the corner infield spot the rest of the way, it will be interesting to see what the Astros do with him moving forward, but in the meantime enjoy his journey.

Congratulations to Randy Cesar on being named Astros Future Player of the Week.

There are certainly plenty of other players of note this week within the Astros organization.  Cesar’s teammate Josh Rojas is a good place to start.  Rojas went 12-for-25 (.480) this week and if weren’t for the home runs and the hitting streak he could have easily taken the Player of the Week honors.  Staying with Corpus Christi, pitcher Ryan Hartman made one start this week going 6.1 innings picking up a win while striking out a career-high 11 batters on May 17th against San Antonio.  Cionel Perez picked up his third and fourth wins of the season for the Hooks allowing just two runs over 9.1 innings with 14 strikeouts.  For the season Perez is 4-1 with an ERA of 1.87.

Staying on the pitching side of things, Fresno Grizzlies Matt Ramsey made three appearances this week picking up a win without giving up a run, surrendering just two hits, and striking out 11 over six innings.  As for their offense, Fresno had plenty of it this week as they usually do.  As a team, the Grizzlies hit 12 bombs including three from A.J. Reed, and two from each of Tim Federowicz, Jon Kemmer, and Jake Marisnick.

Miguelangel Sierra had a nice week for the Quad Cities River Bandits collecting 11 hits, including two doubles and a home run.  He is currently hitting .300 in 10 games for Quad Cities.