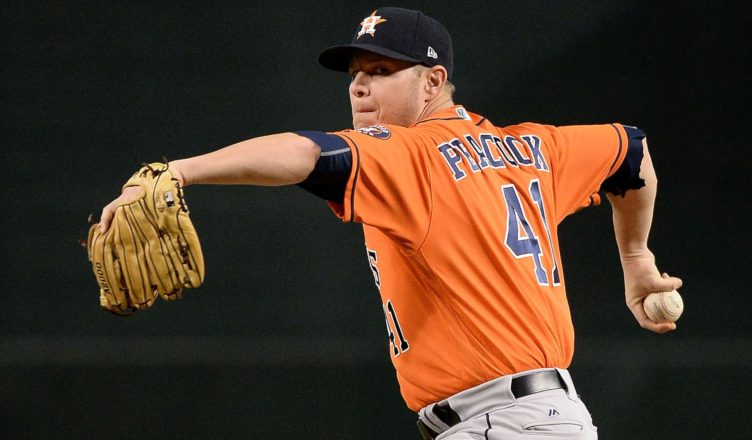 Doesn’t Care About Your Expectations

“I’m not going to lie. Disappointment is a little bit of an understatement.” Those words, spoken by Dallas Keuchel, perfectly summed up my feelings months before he said them. It was late May, and I had saved up to take my mom and sister to go see Keuchel work his magic against the Tigers.  Only, now we wouldn’t get to see him play at all.

No, he just happened to suffer a mysterious pinched-nerve-ish injury mere days beforehand. And instead of basking in the magical powers of our beloved ace, I was going to watch the guy who was chased from his last start the year before after giving up 7 runs in 4.2 innings try and keep the slumping Astros from losing their fourth straight game. Oh, and he had to do it against the reigning American League rookie of the year, the extraordinarily aristocratic-sounding phenom, Michael Fulmer. Did I mention that Peacock hadn’t thrown more than a couple of innings in one outing the whole season? Even his initials, B.P. were less than reassuring.

The gameplan was simple: our guys just had to hope Peacock could limit the damage for as long as possible, try to wear out Fulmer, use some more of that late-inning magic, and hope the surprising Chris Devenski and his comrades could lock it down.

This season had been a ton of fun so far, and yet, it seemed determined to keep us fans’ egos in check. After winning the first three games of the year, reality smacked our beloved ‘Stros in the face with a nice, fat trio of losses. Speaking of three straight L’s, that’s exactly what had they’d run into after starting the month a dazzling 13-3. Icarus would beam with pride.

Cut to the first inning. Big Bad Brad decided to bring it today, it seemed. He sliced and diced his way through the first inning with efficiency seemingly stolen from Greg Maddux himself. Kinsler flailed. Avila froze. Cabrera flung his bat. All of Detroit cried.

The bottom of the inning was a pretty nice little surprise too. Springer walked, then flew all the way around as Altuve flicked his tongue and doubled down the line. “Ok, I see.” I thought to myself. “This is exactly what I get for being such a pessimist.” As I mentally penned an apology to Hinch & Co. for ever doubting, the Minute Maid Park staff decided to spray adrenaline directly into the air for some reason. Or at least that’s how it felt for the rest of the afternoon, as sir Bradley J. Peacock the first held the Tigers hitless ‘til the 3rd, dealing his way to 8 K’s through 4 1/3 squeaky clean innings before Devo and his merry men took the reins and allowed the weekday MMP crowd to keep our lunches and hearts inside.

But allow me to forget about the box score for a second. Because THAT, my friends, was when my skeptical mind took a metaphorical deep breath and realized that this was it. That this team was destined to grab hold of that magic and somehow avoid disappointing a faithful fanbase for whom disappointment was always just part of the gig.
THIS WAS IT!

Sure, there were obvious stars. There were crazy comebacks that I still can hardly process. Insane winning streaks. Historic feats of strength performed by our downright murderous lineup.

But these were the little moments that made it all so gut-wrenchingly real. Brad Peacock started the year without any certainty of even staying with the team.

Brad HAD to earn a spot just to keep his job.
Brad HAD to bring his A-game from the bullpen.
Brad HAD to fill in for a former Cy Young award winner.
But Mr. Peacock didn’t HAVE to be the best regular season starting pitcher for the 2017 Houston Astros.

Nobody expected him to quietly anchor the rotation of the eventual world champions. No, Brad Peacock stepped up and became the hero none of us ever deserved.

I got my money’s worth and then some that day. When my heartbeat finally dropped back down to normal human levels after that 1-0 classic, it all hit me more than ever that this team, this team right here, had that extra little bit of guts that can bring that extra little (not actually little) bit of glory.

Brad Peacock destroyed the Tigers lineup on that little Monday in Houston. And while that specific game might not have been the most exciting of the year (it definitely was not), it really might have been one of the most important.

And Brad Peacock is the living epitome of everything that game was. He showed up on a Monday, calmly changed the course of the Astros season, and blew us all away.

View all posts by Chandler Albers →