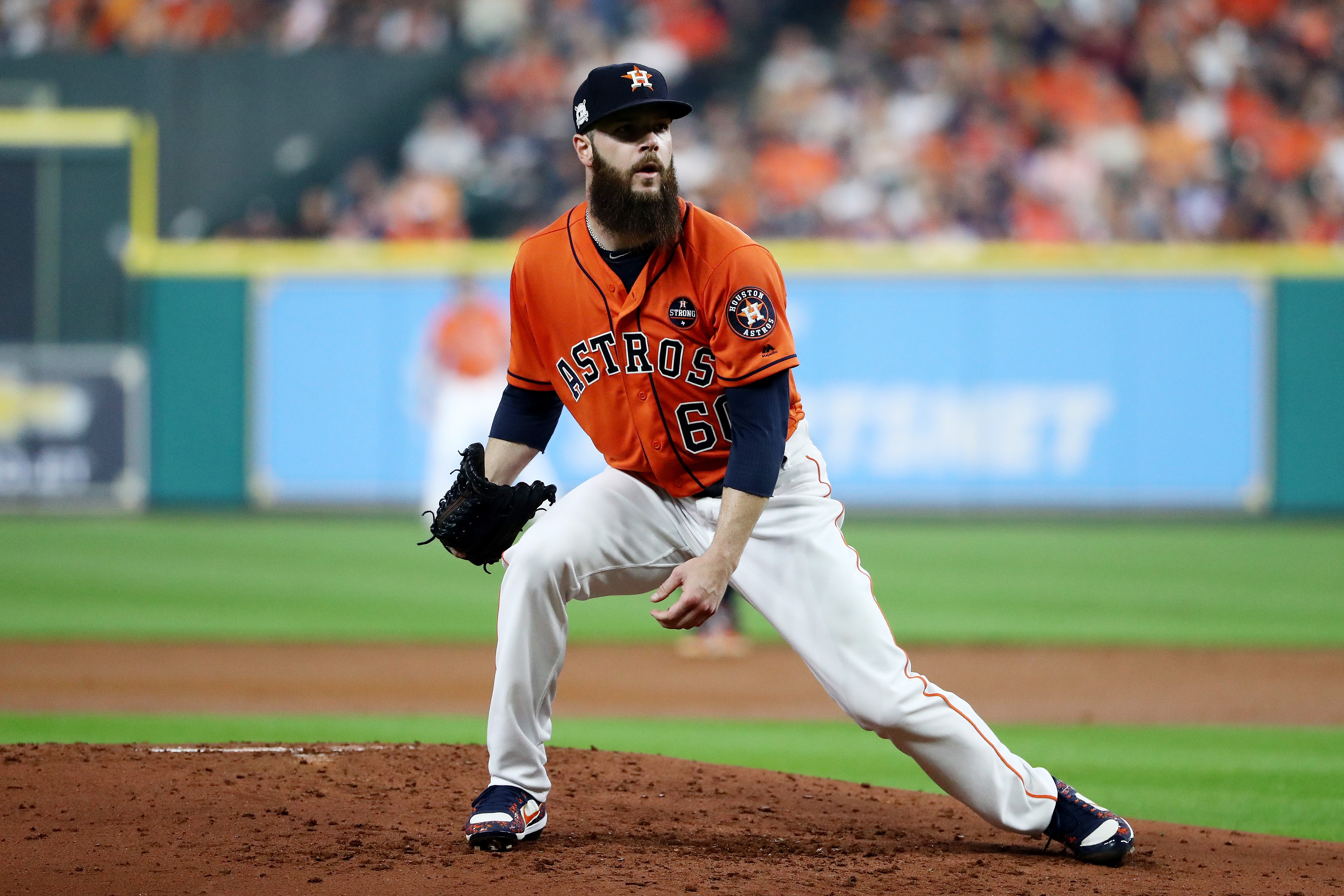 HOUSTON, TX - OCTOBER 13: Dallas Keuchel #60 of the Houston Astros reacts in the third inning against the New York Yankees during game one of the American League Championship Series at Minute Maid Park on October 13, 2017 in Houston, Texas. (Photo by Elsa/Getty Images)

Could The Astros Have Four 20-Game Winners?

Baseball has evolved in many ways since it’s invention in 1839. From 8 balls being required for a walk to the concept of a bullpen and all the way to sabermetrics, the game has transformed before our very eyes. One development through the years is the number of starting pitchers and their ability to throw a majority of the game before handing the reigns over to the bullpen. If a pitcher pitches well enough, they may get another number added to their personal win column, and while wins are becoming a way of the past to determine a pitcher’s success, nevertheless it makes for an attractive look on a pitcher.

Since World War II, only one team has been able to notch the incredibly rare feat of owning four pitchers with 20 wins or more in a single season: That team being the 1971 Baltimore Orioles. Since then, many dynamic teams have come and gone without so much as even three 20 game winners. The Braves with Glavine, Smoltz, and Maddux could not piece together three 20 game winners at any given time. The 2011 Phillies, perhaps one of the most hyped rotations of all time, fell short as well. Three 20 game winners has proved to be extremely difficult for teams to produce. This begs the question: Can a team ever match what the Baltimore Orioles did in 1971?

In the present, the Astros flaunt their World Series Trophy. The Astros hold on to a new and improved Justin Verlander who looks to have found the fountain of youth for another two years. Dallas Keuchel stares one last year in the face with the Astros before he is set to reach Free Agency after the 2018 season. Lance McCullers Jr returns from a campaign that saw him show flashes of ace-caliber dominance before injuries slowed him down.

But perhaps the biggest cause for excitement now is the acquisition of the former #1 overall pick of the 2011 Draft in Gerrit Cole. The ace of the Pirates since he was called up in 2013, Cole is a young Verlander who, coming off a rough season in Pittsburgh, looks to live and learn with an organization that thrives on solving pitchers. Cole comes to the Astros staring at a role he has not seen before: The #3 starter.

The Houston Astros sprint in 2018 looking to build upon what they started in 2017. They possess the best rotation in baseball, albeit on paper, with a dynamic lineup to back them up on the daily. Dallas Keuchel has been dominant since his breakout campaign in 2014, winning the Cy Young Award in 2015, a year in which he won 20 games.

Lance McCullers has shown he can light the world on fire when he’s healthy. Through the month of June 2017, McCullers possessed a 7-1 record that saw him thrust into the conversation of one of the better pitchers in the country. As stated before, injuries caught up with him and put a halt to a great season McCullers looks to build on in 2018.

Justin Verlander has become young again. With new advancements previously unavailable to him in Detroit, Verlander enters his first full season with the Astros ready to regain his prime form, a form that saw him win 24 games and the AL MVP in 2011 (a rarity for pitchers). With his guidance and teachings, he has much knowledge to instill to the younger pitchers of the staff.

Gerrit Cole seeks a fix that will get him back to his dominating ways on the bump. Entering Houston with Justin Verlander vibes, Cole can pitch now with the weight of being the bell cow of the rotation off his shoulders.

Lastly, the guy that seems to be overlooked is Charlie Morton. Morton was very good last season finished with 3.62 ERA and 10.0 K/9, to include 14 wins. He would have to stay healthy and pitch deep into game but even he has a chance to push up that win total.

The Houston Astros return every positive on-field contributor to a lineup that holds four of the brightest young players in the game, including baseball’s best double play duo in Jose Altuve and Carlos Correa. Last season, the Astros had a historic offense that rivaled the likes of the 1927 Yankees in OPS+. When pitchers needed it, the lineup came through in the clutch more often than not. It’s a lineup Cole has never seen and one Verlander remembers fondly from his time with devastating hitters such as Miguel Cabrera and Prince Fielder.

The lineup proved time and time again, especially in the playoffs, that when their backs are against the wall they will deliver.

Why it’s Not Feasible:

While it’s fun to think of hypothetical situations, the game has evolved enough over the last 50 years to make having four 20 game winners a highly unlikely occurrence. Bullpens are much more relied on now than they were even at the turn of the century, let alone in 1971. With the evolution of bullpens and pitch counts being placed on starting pitchers, pitchers will typically hit the showers after throwing 6 innings a game. In baseball, a lot can happen in those three innings to lose the win for the starting pitcher. That’s the uncertainty of the game of baseball.

The rotation looks brilliant on paper…IF all four remain healthy. Last season alone Dallas Keuchel and Lance McCullers missed around ten starts each due to an assortment of different injuries. Verlander and Cole look to both follow up injury-less years and pitch a complete season for their first full season in the city of Houston. If all four remain healthy, Houston will no doubt have the top rotation statistically speaking. Alas, that is a big “if”.

Longevity of the Season

Baseball is 162 grueling games played in more than two dozen cities. Over the course of those 162 games, players get fatigued from the schedule, travel, and living arrangements. It is very easy to fall victim to the longevity of the season and have performance suffer because of it. In reality, it’s not about how you play in the middle of the season, it’s about how you play when it matters most and finish what was started, so regardless of what struggles are met along the way, the end goal always stays the same.

While it would be amazing to have four 20 game winners in one rotation, the consensus remains that with the way the game has been altered over the years, it is unlikely we will ever see a team with four 20 game winners ever again. The game is simply too taxing, too organized, and too unpredictable to see something like that unwind before our eyes again.

Regardless of what happens win-wise, it has become clear to many in baseball that the Astros are here to stay and plan on making the 162 game gauntlet as difficult as possible to get through. While we might not see 20 wins each, the Astros rotation will still be one to watch out for in 2018. There doesn’t look to be a weakness in it, which even as early as last year would’ve been ridiculous to say about the Astros. One thing is for sure: the Astros are coming for more blood in 2018, and they seem to have found a way to improve each aspect of their game, and who knows? Maybe the Astros will continue to shock the baseball world and dole out four 20 game winners. If that’s the case, well, you heard it here first.