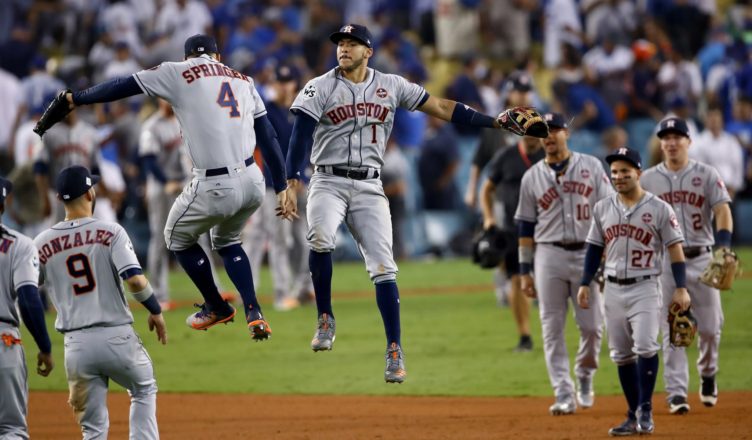 The Astros had a memorable and historic 2017 season winning the first World Series Championship in franchise history. Though we will never forget the 2017 season, I think most are ready for the 2018 season to start. It just doesn’t seem right for a season to start without putting some bold predictions out there first. Here are some predictions from Johnny, Joshua and I for the 2018 season.

1. Ken Giles will lead the league in saves – First I will start by saying save totals don’t define a pitcher (just like wins) but are still nice to see.  Giles seems to get a lot of heat from Astros fans wanting a lock down closer. I have always been a Giles fan and while his 2016 wasn’t great, he was dominant in 2017. I know the playoffs left a bad impression on some, but Giles wasn’t the only reliever that struggled. In 2017 he had a 2.30 ERA with 2.39 FIP.

He improved his groundball percentage by nearly 5% and was able to cut down on the homers. Last year Alex Colome lead the league in saves with 47, next closest was Kenley Jansen with 41. Giles finished 2017 with 34. With the Astros looking like another 100+ win team, I don’t think its too farfetched to see him adding another 5-10 saves and leading the league. But even if it isn’t realistic, what would be the point of a “bold” prediction?

2. Astros tie MLB record with 7 players with 20+ homeruns – This is bold, but not too bold. Bold would be predicting the Astros break this record, but Gurriel’s injury could be a problem here. The current record is seven players with 20+ HR (multiple teams). With that said, the pretty much locks to hit 20+ HRs (barring injury) are George Springer, Carlos Correa, Jose Altuve, Evan Gattis. I think Bregman gets there, he had 19 HR in 2017 and his first didn’t come until game 38 on May 14th. That makes five guys total.

Next up is Marwin Gonzalez. While its hard to predict his playing time, I think its safe to assume he will get about as much playing time as he did last season when he hit 23 HR (six players over 20). Lastly is Derek Fisher. It appears he will be the full time LF and if so, he definitely has the power to hit 20+. He could make seven total. If Gurriel comes back quicker than expected, I think he could be a 20+ guy too. He finished with 18 HR last year but hit just 2 in the 55 games of the season. This would give them 8 players with 20+ setting the record, but I think 7 players with 20+ is still a solid prediction.

1. Astros Rotation features 3 15-game winners – The Astros possess not only the top rotation in baseball but the top lineup in baseball as well. That combination makes the possibility of three pitchers attaining 15 wins not so far-fetched. Given that all of the pitchers in the rotation can pitch deep into games, the potential is limitless. Verlander is one of baseball’s last true workhorses going over 200 innings in every year but one since 2007.

If Keuchel and McCullers both stay healthy, they both have the potential to pitch ace caliber baseball, and the newly acquired ace from the Pirates, Gerrit Cole, looks to bounce back from a somewhat down 2017. Yes wins aren’t the tell-all stat for pitchers, but if the pitchers are winning, who care how they get them? The Astros will dominate both offensively and defensively in 2018 as both sides will continue to keep opposition up late at night all year long.

2. Astros break single season win record – Twice achieved in baseball history by both the Cubs (1906) and the Mariners (2001), baseball’s most wins in a single season resides at an insane 116 games. In today’s game that looks unbreakable….but the Astros could do it. With a young lineup featuring guys like Bregman and Correa, who have yet to reach their max potential, Jose Altuve, and the glue that keeps them together, George Springer, the offense is ready to roll.

The rotation features 3-4potential aces that look to continue their dominance. Complacency wont be a factor as it appears the guys are hungry to repeat as champions. If the staff stays healthy and the lineup continues what they started last year, the Astros can break the record wins in a single season.

1. Alex Bregman will receive MVP votes – Yes, I have to eat crow on this one.  Last offseason I wrote an article indicating that I would be willing to trade Bregman for Chris Sale or Jose Quintana.  I was wrong and I have never been happier to admit it.  It is not that I didn’t know that he was talented, but honestly, I did not think he would be THIS good, this fast.  Bregman was an absolute beast in the second half of the season last year.  He had a .315/.367/.536 with an OPS of .903, 11 homeruns, 48 Runs, 44 RBI, and 9 stolen bases in only 70 games.

Baseball Reference had him pegged as having a 4.6 oWAR for the entire 2017.  After an offseason where he dedicated himself to eating better, a rigorous workout regimen and a desire to be the best, he could be even better in 2018.  I don’t now if he will receive any first place votes and I certainly don’t think he will win it, but I do think his name will find the ballot of some voters and maybe could find himself finishing in the top 10.

2. Kyle Tucker and Forrest Whitley will be on playoff roster – As mentioned in the article yesterday, the rich will get richer. The Astros, possibly the most talented on the planet, has two emerging prospect who could both make their debuts this season. Kyle Tucker has put together a phenomenal spring following up his 2017 season which saw him hit 25 HR between A+/AA at just 20 years old.

On the other side of the ball, the Astros have a potential top of the rotation in Forrest Whitley. All he did last year was finish with a 2.83 ERA and 143 K in 92.1 innings between 3 levels at just 19 years old. Both prospects look to be on a path to debut this season and I think they will both be on the playoff roster (if the Astros make it of course). This give the Astros another left handed bat and a power arm out of the bullpen which could make solid playoff pieces for an already stellar baseball team.