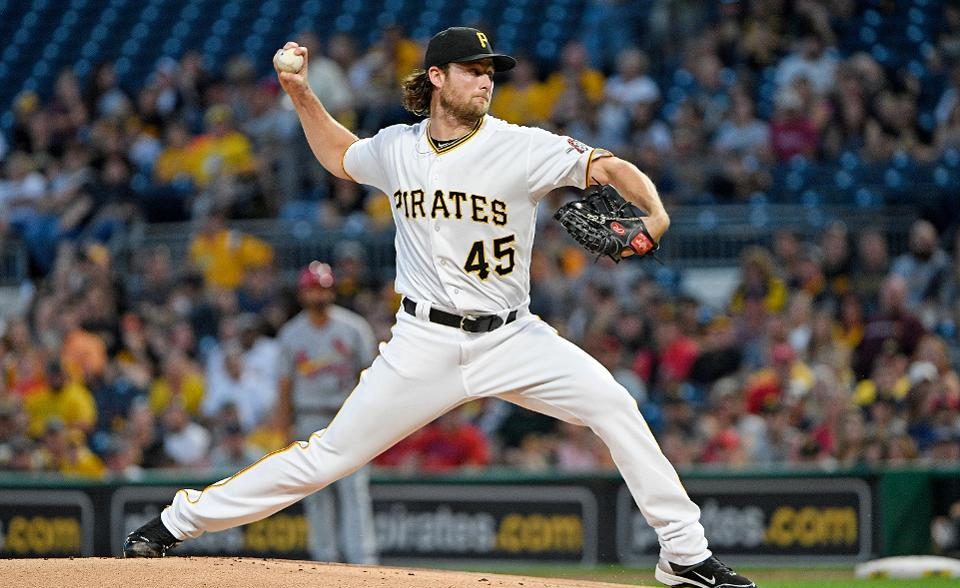 Gerrit Cole Brought in as Astros Pursue a Repeat

Jeff Luhnow finally got his guy. After premature reports came out earlier this week, the Houston Astros traded for the Pittsburgh Pirates’ ace, Gerrit Cole, Saturday afternoon. The most surprising part of the deal is that Luhnow was able to do this without giving up any of their top prospects, particularly Kyle Tucker or Forrest Whitley. The acquisition of Cole solidifies an already strong starting pitching staff and gives the Astros some insurance incase Dallas Keuchel leaves via free agency after next season. The final deal looked like this:

2017 was not Cole’s best season, but after an injury plagued 2016, it was encouraging to see that he surpassed the 200-inning plateau. The biggest issue that Cole faced last year was with the long ball. Last year he gave up 31 homeruns, which was a significant spike over any of his previous years. Still only 27, though, the Astros are confident that he can rebound and perform at a level closer to 2015, where he went 19-8 with a 2.60 ERA and finished 4th in the NL Cy Young award. Between Brent Strom and the Astros’ extensive analytics department, which saw improvements out of both Charlie Morton and Justin Verlander last year, there is no reason to think that Gerrit Cole won’t be able to get closer to his 2015 self.

Gerrit Cole has a mixture of fourseam fastball, sinker, slider, curveball and changeup.  According to FanGraphs, his fastball and sinker sat around 96 mph on average last season.  His changeup and slider sit around the 88-89 mph range and his curveball was around 80 mph.  In terms of usage in 2017, he was mainly a fastball (41.9%), sinker (18.1%) and slider (17.3%) guy, although he was not afraid to show his curveball (12.3%) and changeup (10.5%).  With Brent Strom, it would not shock me if his slider usage increases as they try to maximize his spin rate.

Musgrove had varying success with the Astros in 2017.  As a starter, Musgrove had a 6.12 ERA and a 1.51 WHIP which ultimately relegated him to the bullpen.  Here, though, Musgrove pitched well for the Houston Astros,  pitching to a 1.44 ERA and a 0.86 WHIP.  He also came up with some big innings in the postseason, none bigger than game 5, where he earned the win after pitching a scoreless 10th inning to give the Astros the opportunity to win it in the bottom half of the inning.  Prior to the trade, it was expected that he would be a key cog in the Astros bullpen in their quest to repeat. In Pittsburgh, though, Musgrove will likely get the chance to battle for a spot in the starting rotation.

At the time of the trade, Moran was Houston’s 5th best prospect according to MLB.com. He now ranks as Pittsburgh’s 4th best. Colin Moran really showed some signs of turning the corner after making some adjustments at the plate until an unfortunate foul ball to his face ended his season last year. Despite this, Moran was just a guy without a position for the Astros. With Alex Bregman at third and Yuli Gurriel at first, Moran was going to have to try his hand in the outfield if he wanted to break the Astros’ lineup this year. With the trade to Pittsburgh, Moran will likely find an easier path to playing time at either first or third base at the professional level.

Feliz has always had the stuff. With a fastball in the high 90’s and  a slider in the mid 80’s, he was your prototypical power relief pitcher.  The problem, though, is that he has just never been able to put it together consistently. Due to his inconsistencies last year, he bounced between the majors and minor leagues and found himself off of the World Series roster. Feliz was your classic change-of-scenery type and may ultimately do well in Pittsburgh if he can find the strike zone a little more often.

At the time of the trade, Jason Martin was Houston’s 15th best prospect and now ranks 18th for Pittsburgh. Martin is a power/speed combo player that showed a lot of offensive skills in 2017 between Buies Creek and Corpus Christi. Despite this, there have been some concerns about his defense. While he has some pop, he doesn’t profile as a corner outfielder but may not have the defensive prowess to be a centerfielder. The Astros left him exposed during the Rule 5 draft but were fortunate when no one took him.  Now he finds himself in a Pirates’ organization that is relatively deep in the outfield, especially with their top prospect, Austin Meadows, knocking on the door.

For a team that did not lose any starters after winning the World Series, there was never really much that the Astros had to do. With that in mind, Jeff Luhnow is always looking to try to improve the club (hence the Cole trade) and I could still see a couple more moves. It would be no surprise if he still tried to acquire a left-handed reliever and a left-handed bat for the roster. Again, though, these items are more luxuries than necessities. Due to the condition of the roster, Luhnow has the ability to be disciplined and seek out bargains on the free agent market.  A couple names to watch out for are Carlos Gonzalez, who ESPN Beisbol reported had a contract offer from the Astros, and Tony Watson, who previously was a teammate of both Cole and Charlie Morton from their time with the Pirates.