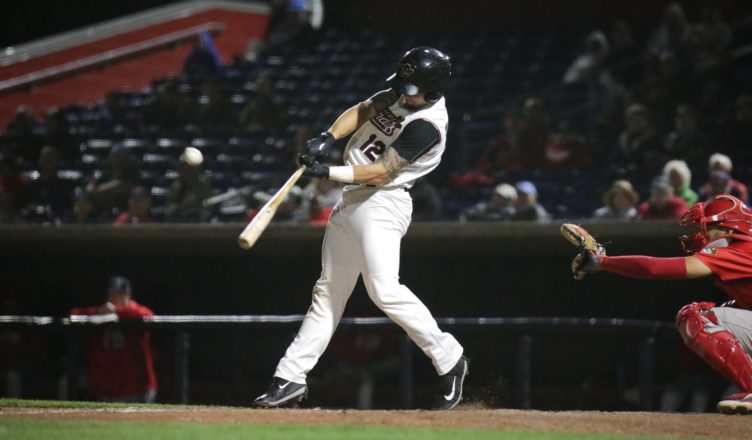 Bukauskas was the Astros first round pick out of the University of North Carolina. While a bit undersized, he had a great college career finishing with a dominating junior season where he had a 2.53 ERA with 116 K in 92.2 innings. Bukauskas has a plus fastball sitting mid 90s and a very good slider. Some have wondered if he ends up in the bullpen based on his size and two pitch mix. He pitched in 10 innings last year between GCL and Tri-City with a 2.70 ERA

Heading into the draft it looked like Perez would be drafted as a pitcher, though some teams stayed away from him due to TJS. The Astros announced him as a third baseman on draft night and have since stated they plan to have him play in the field. He was selected out of Archbishop McCarthy HS in Florida. Perez has good power and the Astros believe he will hit for both average and power. He did not play last season due to his rehab from TJS.

Martin was drafted out of Texas A&M. Martin was a very interesting pick as many scouts were torn on him and where he would go in the draft. He has a mid to high 90s fastball and an overpowering curveball. He struggled with command at times leading some to think he will be a reliever. He pitched well as a starter for the Astros though this year posting a 2.20 ERA with 9 BB/43 K in 32.2 innings.

Matijevic attended the University of Arizona and had a monster junior season hitting .383 with 30 2B, 10 HR, 65 RBI in 59 games. He is a lefty hitter with good bat speed and some power, though his hit tool ranks above the rest. He doesn’t really have a position in the field but the Astros used him in LF in 2017. Matijevic hit .240 with 6 HR, 27 RBI in 53 games for Tri-City.

Ivey originally attended Texas A&M but transferred to Grayson County College for his sophomore year making him draft eligible a year early. In his one season with Grayson County College he went 9-0 with 2.28 ERA and 122 K in 78 innings. Ivey spent time with GCL and Tri-City and while the ERA wasn’t ideal (5.63) he had a very good 14 BB/44 K in 38.1 innings in 2017.

Solomon attended Notre Dame University and had a solid college career finishing strong his junior season. He has a 92-94 MPH that tops out at 96, making it his best pitch. He also has a curveball and slider that have shown plus at times. Solomon has a ton of movement on his pitches and if he brings it all together, he could be a steal for the Astros.

Perry was drafted out of Bassett High School in Virginia. There wasn’t a ton of information on him during the draft but one scout did not that he has big left handed power. He showed good plate discipline in his time with the GCL Astros last year with 10 BB/14 K in 27 games. He was also drafted at 17 putting him in the younger group for high school draftees.

Adams was drafted out of the University of Iowa and had a very good college career. After dominating at a community college for two years he transferred to Iowa where he hit .335 with 29 HR in 61 games. He is a rather large person at 6’3″ and 240 lbs. While he showed off some power in his pro debut (10 HR in 48 games) he hit just .170 and struck out 68 times in 48 games.

Mushinski was an interesting pick but one that can hopefully stick as a left reliever. In high final two seasons with Texas Tech he had a 1.93 and 2.15 ERA strictly out of the bullpen. After the draft he pitched in 13 games for the ValleyCats starting three of them. Overall he had a 3.60 ERA but also boasted a nice strikeout rate of 12.0 K/9 (40 K in 30 IP).

A local product of the Houston area, Julks attended Clear Brook High School and was a star for the University of Houston baseball team for three seasons. His last two years he hit .332 and .335 respectively and showed a nice increase in power his junior year (27 XBH in 59 games). While he only hit .176 for Tri-City, he did have 9 SB and 18 BB/19 K with a .207 BABIP. He will be one to keep an eye on next year.

Papierski played a lot of catcher for Louisiana State University but the bat wasn’t his strongest point, though he did hit 11 HR in his junior season with a good BB/K ratio. He hit just .198 in his pro debut but had 30 BB/29 K in 37 games for Tri-City.

The Astros rolled the dice on Serrano, who has pitched just 13.1 innings in his last two college seasons. He has good stuff and when healthy, has proven to be a legit prospect. He pitched in just 0.2 innings for GCL before the season ended.

Bielak attended the University of Notre Dame. He had a solid sophomore season posting a 2.10 ERA in 55.2 innings. Unfortunately his success didn’t carry over to his junior year where he had a 5.55 ERA in 15 games. After being drafted he lit up the opposition though. Bielak had a 0.79 ERA with 5 BB/42 K in 34 IP between GCL (4.2 IP) and Tri-City.

The Astros went back to the well on this one drafting another player from Seminole State College.  Lacroix hit .447 with 17 HR, 67 RBI in 52 games. He did not make his debut in 2017 and will be turning 21 in February.

Meyers was a two way player for the University of Nebraska in college. During his college career he had a 2.61 ERA in 169 innings. He was also solid with the bat hitting .297 with more walks than strikeouts. Meyers was assigned to Tri-City after the draft where he hti .207 in 42 games.

Diaz was drafted out of Colegio Angel David HS in Puerto Rico.  He was assigned to GCL following the draft where he hit .194 in 19 games. Diaz is a left hitter and lefty thrower with a solid build and plus speed.

Davis was drafted out of West Virginia after having a very good career there for the Mountaineers. Over three seasons he hit .317 with 44 2B, 24 HR in 172 games.  Unfortunately that success didn’t translate over yet as he hit just .177 in 52 games for Tri-City.

Tovalin hit .352 with 21 HR, 75 RBI in his junior season for Azusa Pacific University before being drafted by the Astros. He spent time with Greeneville and Tri-City following the draft hitting a combined .218 with 9 HR in 54 games.

Ruppenthal is a product of Pitcher University (aka Vanderbilt) who pitched primarily in relief. He had a 2.78 ERA in 54 appearances in his college career. The Astros decided to use him as a starter, starting him in 7 of the 8 games he pitched in. In those games he had a 3.04 ERA with 29 K in 23.2 IP.

Garcia attended the University of San Diego where he hit .292 with 14 HR in his junior season. Following the draft, Garcia was assigned to Greeneville and he found some success hitting .277 with 7 HR, 29 RBI in 48 games.

Rojas was a very intriguing pick out of Hawaii. He was a little older than most seniors (23) at the draft but had a good season hitting .294 with more walks than strikeouts. He was immediately assigned to Quad Cities and hit well clubbing 10 HR in just 52 games (.487 SLG). He played second base, third base, and shortstop for Quad Cities.

Like I said at the top, I kept these short due to the amount of guys drafted but hopefully these gives y’all a quick intro to who was drafted, how they performed in college/high school and how they did in their pro debuts.