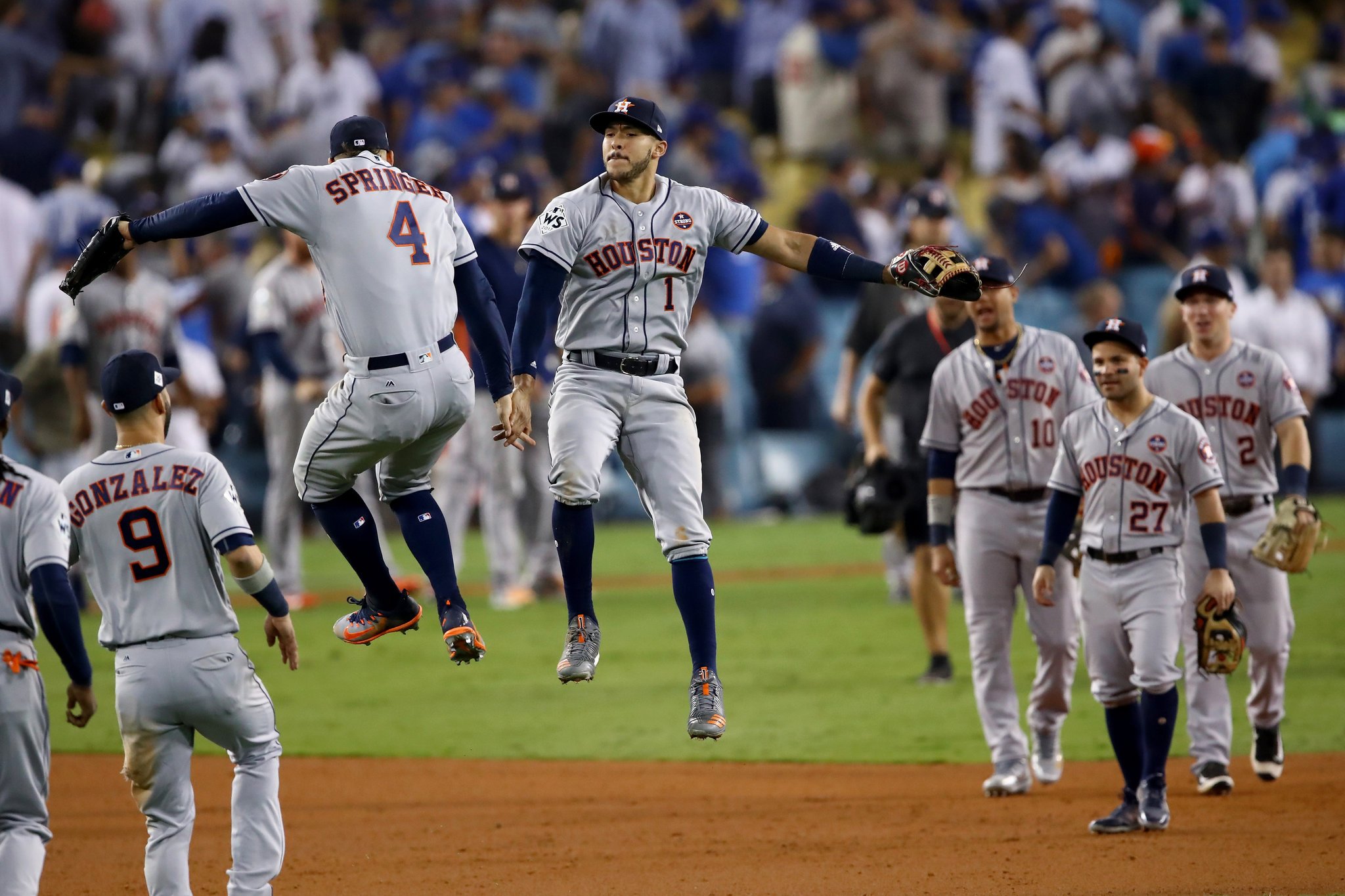 This year was magical for the Houston Astros, and the success that they had can be directly tied to some of the moves they made this past offseason. Luhnow & Co were able to bring in some terrific veteran additions that were crucial on the championship run. Luhnow was able to bring in Brian McCann, Josh Reddick, Carlos Beltran and Charlie Morton with each playing a big role in helping them win it all.  Although they are the reigning World Series Champions, Jeff Luhnow will have to be hard at work this offseason in an effort to repeat. The Astros will have a lineup spot to fill with the probable retirement of Carlos Beltran as well as fixing a bullpen that was largely ineffective in the playoffs. The good news is there is room in the payroll to add some talent as well as having a very deep minor league system to help trade for some talent. The Astros are set up very nicely for the next 5-7 years and hopefully the moves they make this offseason can help bring Houston another World Series title.

These players will be on the team barring trade or unforeseen circumstances.

Roster Bubble – These players may either make the team, in the Astros minor league system or released

While the Astros had a historic offense in 2017, there is still a hole in the DH spot. While Gattis has performed admirably, it is tough to rely on him to be an everyday DH due to his backup catching responsibilities. The Astros would be well served to find someone to be able to fit in the outfield and platoon with Gattis at DH. This will also open up Marwin to resume his super utility role.

Jay Bruce– The local Beaumont product, seemed to have found a career resurgence last season with the Mets/Indians. Bruce was able to compile a 2.9 WAR after posting a combined .3 WAR over his previous 3 seasons. Bruce would give the Astros another high power bat from the left side that can play in left field as well as platoon at DH with Gattis. The only hold up with Bruce could be his price tag which could exceed 100 million but if he is willing to take a hometown discount or sign a shorter term deal, he could be a tremendous fit.

Carlos Gonzalez– Jose Altuve’s fellow countryman is a free agent after the worst season in his career. Gonzalez has been an outstanding hitter throughout his major league career, taking advantage of the hitter friendly park in Colorado. If he was coming off of his allstar 2016 season (.298/.350/.505) he would not be an option for the Astros due to his high salary demands. But the Astros could afford him an opportunity to help him rebuild his value on a one or two year deal. While he struggles against lefties, he could be a perfect platoon partner with Gattis.

Jose Bautista– Joey Bats is in a similar situation to Carlos Gonzalez in that he is also coming off the worst year of his career posting a -1.7 WAR. The difference is that his 2016 wasn’t much better and is now two years removed from his stellar run of being a 5+ WAR player from 2010-2015. Bautista is currently 37 and the Astros saw just how age can affect a player with Beltran. That said, he may be worth a look as a buy low candidate…and who wouldn’t love to see Bautista vs Odor 18 times a year.

Melky Cabrera– While Melky has bounced around the major leagues for most of his career, all he has done is continue to hit at a steady pace. A career .286/.335/.418 hitter, Melky would be a solid but unspectacular fit as a DH/LF and his ability to switch hit would help deepen an already stacked lineup.

While there are two “Closers” on the free agent market, Greg Holland and Wade Davis, I can’t see the Astros making a play for either of them due to their price tags and qualifying offers. The good news is the free agent class for right handed relievers is very deep and the Astros should be able to bring in a couple of them on reasonable deals to help the pen.

Brandon Morrow– A familiar name for anyone who watched the World Series, after being drafted 5th overall by the Mariners, Morrow has been bounced around between the rotation and bullpen before finally finding success as a late inning reliever with the Dodgers. While he has had a checkered past in terms of injuries, when healthy, Morrow is one of the most explosive arms in the MLB. Morrow regularly touches 99MPH on his fastball. Morrow will be looking for a long term deal and it may be a tad out of the Astros ideal price range but if they want to bring in a shutdown arm, Morrow will be their best bet.

Joe Smith– The sidearm reliever was a huge piece of the Indians vaunted bullpen last year coming over at the trade deadline after bouncing around between the Angers, Cubs and Blue Jays. Sporting a career ERA under 3.00 and striking out 11.8K/9, Smith could be a perfect fit as a 7th or 8th inning set up man.

Addison Reed– A dominant setup man for the Mets and Red Sox, Reed has had a 2.40 ERA with 9.8K/9 over the last two years and is still only 28 years old. The former White Sox, Diamondbacks and Mets closer will be one of the most sought after relievers this offseason due to both his performance and age and he could be looking for a guarantee at the closers role, which I am not sure the Astros would be willing to give him.

Steve Cishek– The righty with the submarine throwing motion has been one of the best relievers in baseball at getting groundballs (56% GB rate). After hip surgery last offseason with the Mariners, Cishek was traded to the Rays where he was absolutely lights out allowing only 3 runs over 24 2/3 innings. Cishek also have experience closing with both the Marlins and Mariners although he may be suited for a 7th or 8th inning role.

Finding a solid and stable left handed reliever has been an impossible task for the past couple of years. Trying to skate by with Sipp, Liriano and Guduan will not continue to work. This is the year the Astros finally need to invest in a true left hander for the pen.

Mike Minor– The former Atlanta Braves starter has finally found his home in the Royals bullpen after several injury plagued years. Over 77.2 IP, Minor had a 2..5 ERA with 10.2K/9. Not just a LOOGY, Minor can throw multiple innings against both lefties and righties. Due to the need for left handed relievers, Minor will be one of the most highly sought after players this offseason.

Tony Watson– Another familiar player from the World Series. Watson was traded from the Pirates to the Dodgers at the deadline and gave them 20 solid innings with a 2.70 ERA. Unlike Minor, Watson is best used as weapon against lefties but should still see a big market for his services.

Jake McGee– A victim of the thin air at Colorado, McGee had his worst season as a pro after several dominant years in Tampa Bay. Like most Rockies pitchers, the difference in his home and road splits are substantial (4.73ERA at home vs 2.64ERA on the road) and leaving Colorado could return him to his dominant Tampa Bay form.

I see the Astros bringing in 3 relievers this offseason to pair with incumbents Giles, Musgrove, Harris and Devenski. The Astros love ground balls and I think that Cisheks GB% would fit their bullpen perfectly while McGee gives them the left handed reliever that they have needed since Billy Wagner. The Astros were in desperate need of bullpen outs this postseason and I can think of no one better than Morrow to be able to step in and get those big outs and even fill in at closer if Giles continues to melt down. Bringing in a big lefty bat like Bruce would fill a huge need in replacing Beltran and would also allow Marwin Gonzalez to continue his everyday utility role instead of being the everyday left fielder.