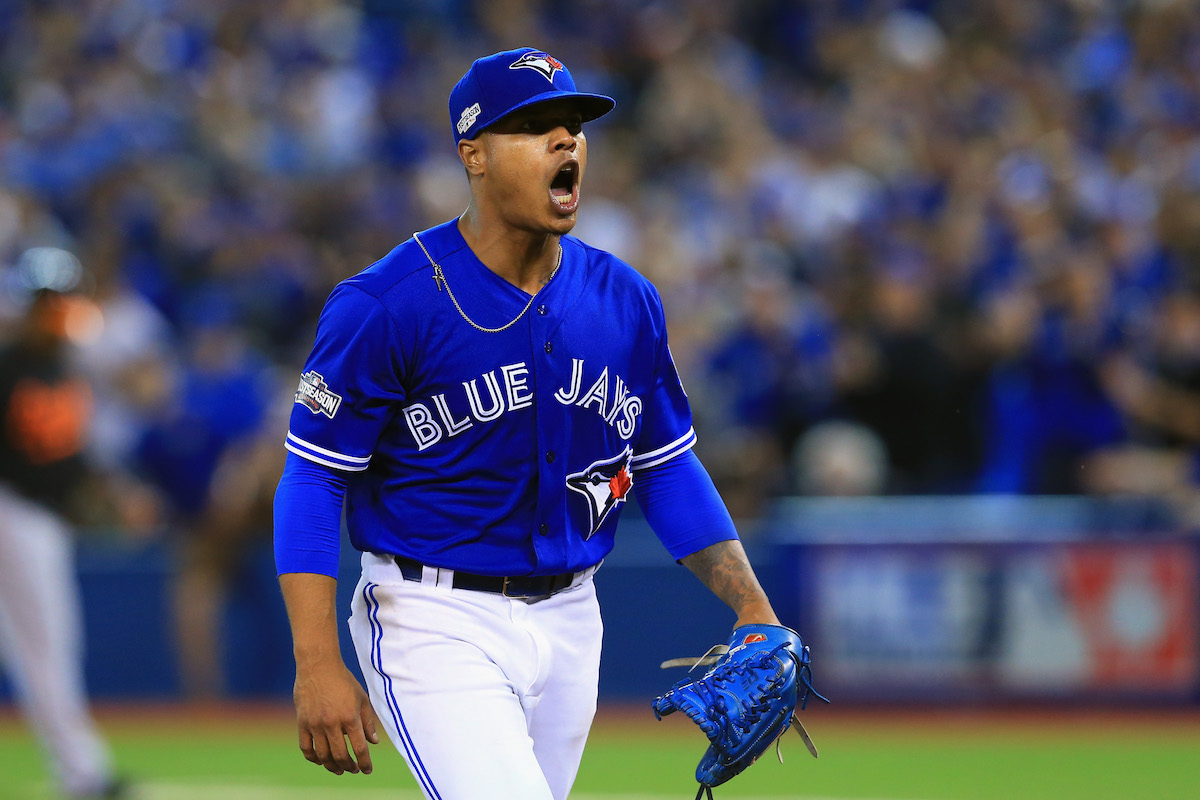 TORONTO, ON - OCTOBER 04: Marcus Stroman #6 of the Toronto Blue Jays reacts after the final out in the sixth inning against the Baltimore Orioles during the American League Wild Card game at Rogers Centre on October 4, 2016 in Toronto, Canada. (Photo by Vaughn Ridley/Getty Images)

A Wild Take on the Astros Off-Season

The Houston Astros, after winning the 2017 World Series, have entered the offseason a month behind the rest of baseball. While the hometown Astros succeeded in securing a championship, Postseason Baseball succeeded in shining light on a few positions the Astros will have to take a long look at upgrading come this winter.

While not many big moves are expected out of the Astros this offseason, I believe the Astros could benefit greatly from adding another game-changing piece, one that will give the Astros not only a better chance of hoisting the World Series Trophy again in 2018, but also for the next several years. Let’s take a look at a few potentially game-changing moves that could make the Astros a true force to be reckoned with come 2018.

I’ll be honest with you. I have spent an unhealthy amount of time thinking about the possibility of Stroman finally being a Stro, man. To me it makes sense in a number of different ways. For starters, the Blue Jays contention window is closing, and with a number of players hitting Free Agency after the 2018 season, it’s not crazy to believe they may try to unload their pieces before they leave. If the Jays unload Josh Donaldson before the season, Stroman seems like a candidate to get at least shopped.

Stroman would be a bow on what would be a juggernaut rotation, with Verlander, Keuchel, Stroman, McCullers, and Morton paired with 2017’s best offense, giving the Astros great odds to repeat as champs. It also makes sense from a financial standpoint, as Stroman currently makes $3.4M and is under contract and not set to hit Free Agency until after the 2021 season. This give the Astros the flexibility to allow Keuchel to test Free Agency after the 2018 season and roll with Verlander and Stroman as the front-runners in 2019.

By now it’s known Forrest Whitley won’t be traded and could have an impact as early as next year. By acquiring Stroman, the Astros could be patient with Whitley and allow him to establish himself in the bullpen in 2018 and then take over as a starter in 2019. To push the Astros over the top, acquiring Stroman would do just that.

It’s unknown what the Blue Jays would want in return but we all know it isn’t going to be cheap.

I won’t admit it, but Ohtani might be one of the more “unlikely” moves on here, but nevertheless, I believe Ohtani makes a lot of sense for the Astros. A two player, known as the Japanese Babe Ruth, Ohtani runs his fastball up to triple digits with a killer slider and a splitter just as good, as well as being an elite hitter, one who can hit for contact and power like only few hitters can.

Ohtani to the Astros makes sense given an opening now at DH and LF vacated by Carlos Beltran, giving him everyday ABs when he’s not on the mound. From a pitching standpoint, the Astros possess the type of depth in the rotation that would make a transition to the states and MLB fairly smooth for the Japanese duel-threat. In Japan, pitchers pitcher once every 7 days instead of 5. The Astros, with their collection of arms, have the ability to roll out a 6-Man rotation and not skip a beat.

Ohtani would be essentially like adding two of the top free agents, one as a pitcher and one as a hitter. Putting his bat in the lineup gives a major boost to an already stout offense, as well as bolstering the rotation and providing AJ Hinch with more flexibility on the 25 Man Roster on the quest to adding another World Series Trophy to the trophy Case in 2018 and beyond.

Derek Jeter was a part of the group that purchased the Miami Marlins and since has taken over baseball operations for the club. His first order of business is to cut salary, starting with ultra-slugger Giancarlo Stanton. If Jeter continues to view his cards correctly and see what he can get for one of his young OFs, it may be worth parting with one of them.

The 26 year old Ozuna quietly had one of the best years in the league. You won’t see his name very high up on the MVP voting, however, especially given the year many players had in the NL, including his teammate in Stanton. With 37 HR and 124 RBI, as well as 30 2B, 191 H, and a 145 OPS+, Ozuna broke out in a big way, and as he will not be set to hit Free Agency until 2020, his value on the trade front cannot be overstated.

Asking price wise, this is where Kyle Tucker comes into play. Essentially, the Astros’ hope is that Tucker develops into one of these types of players, so it’s hard to imagine being untouchable if the Astros get back an OF the caliber of a Yelich or Ozuna, both of which have already proven they belong on the big stage. Putting together a lineup featuring Correa, Altuve, Springer, Bregman, and one of the Marlins’ sluggers would improve was has already been baseball’s best offense.

If we’re going to talk about upgrading the lineup, we might as well look at Carlos Santana, a 31 year old power hitting 1B from the Indians. No longer agile enough to sustain the struggles of catching in the Big Leagues, Santana would sign on as a 1B/DH hybrid, creating a healthy tandem with Yuli Gurriel to switch off 1B and DH duties with Santana as both continue progressing to their mid-30s.

Santana has played in 143+ games every year since 2011 and has seen an increase in power and a decrease in strikeouts over his last two years, hitting .259/.363/.455/.818 with 23 HR, 79 RBI, 37 2B and only 94 K across 154 games played in 2017. Surrounded by a lineup of young talent, The Crawford Boxes, and a short porch in Right Field, the switch-hitting Santana could see a number productive years hitting in the hitter-friendly confines of Minute Maid Park.

By now it is well known the Astros are as thin as possible in left-handed arms in the bullpen. With only one returning lefty reliever under contract for 2018 in Tony Sipp, the Astros will most certainly upgrade the bullpen in this aspect. There are four options the Astros can go here. Rental, Short control, long control, or Free Agency.

In Britton, the Astros can nab one of the game’s best closers for a year, but injuries showed him down in 2017. If he stays healthy, you have a lights-out closer. If not, chances are the package for a rental closer won’t sting too much should things not work out.

In Hand and Rivero, you acquire one of the NL’s best relievers, both of which have closing experience. Rivero would be under contract for 2 years longer than Hand (Free Agency years of 2020 and 2022) while locking down the late innings for the Astros for the following number of years.

As for Minor, a breakout reliever in 2017 after having previously been a starter for his career, you get a guy whose numbers are strikingly similar to Hand’s and he wouldn’t cost prospects or; just money.

For the first time ever, the Astros are defending World Series Champions. Looking forward, it is well known the Astros’ window of contention has only now just opened. The Astros are not desperate to make moves to push them over the top. Nevertheless, a move similar to one of the ones listed above would surely make them a World Series favorite for a number of years to come and provide the recovering city of Houston a chance to see more championship hardware get brought back home in their near future. It will be interesting to see how GM Jeff Luhnow approaches his first offseason with the Astros as World Champions. Some moves will be made, but the Astros are sitting on the throne for now, and until the 2018 Season begins, the rest of baseball will be trying to catch up to the World Series winners

Now, the Astros could stand pat, add a couple relievers and still have one of the best teams in the MLB with a legit shot to win another World Series. I find this more likely but it will be up to Jeff Luhnow to decide which direction to take the squad.