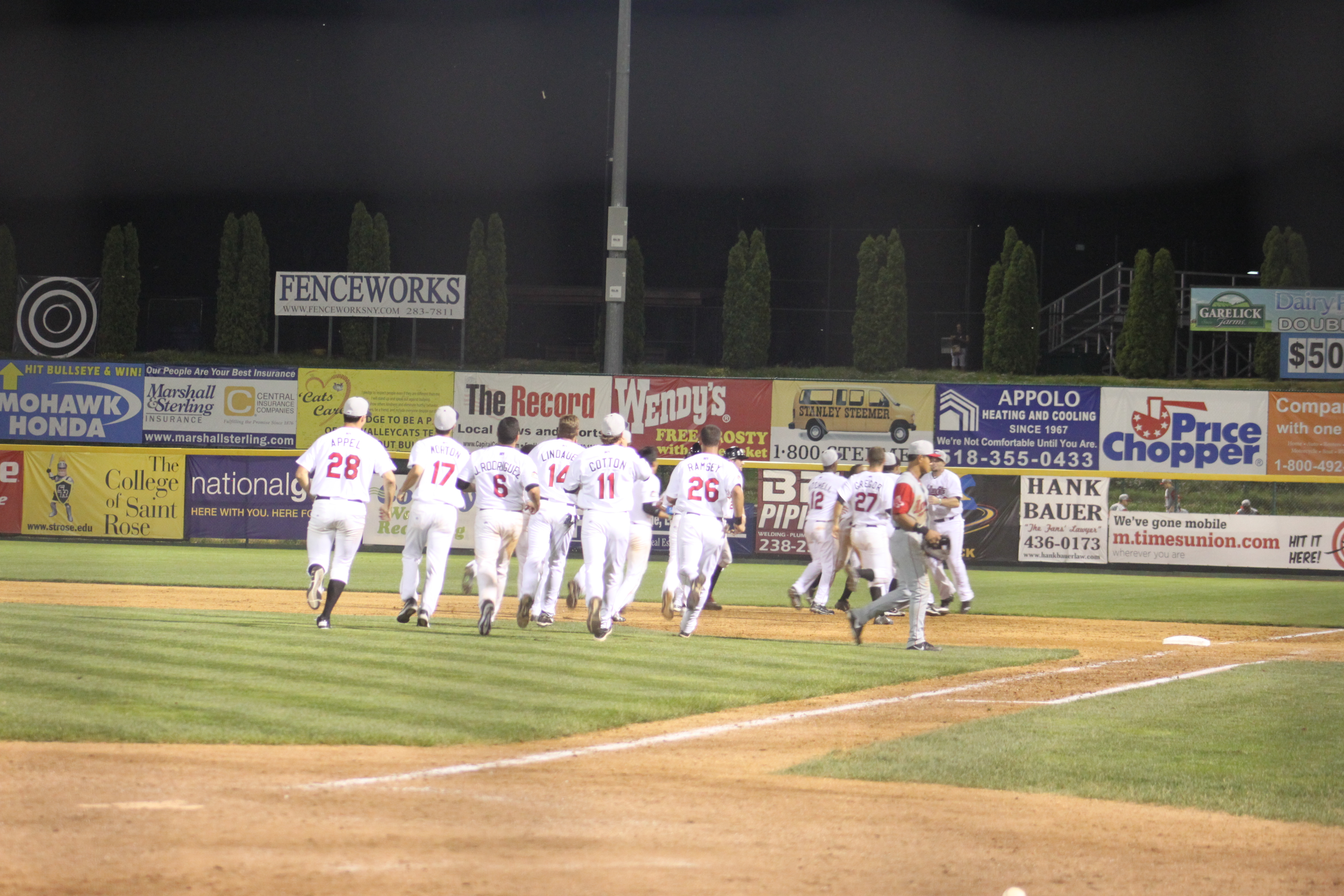 The Tri-City ValleyCats were hoping to bounce back after a .500 season in 2016.  With a brand new coaching staff in place, the ValleyCats were looking to get back into the New York-Penn League playoffs after missing them the year before.  Former Houston Astros infielder Morgan Ensberg landed his first managerial gig when he was named manager of the ValleyCats back in January.  The task is a tall one when taking over a Short Season Single-A team as the roster fluctuates so much during the season.  Just when things start going the way you hope or a player gets hot, next thing you know they’re gone.   Even with all of that, the fans that came out to “The Joe” didn’t mind as the team continues to set record attendance numbers year in and year out.  Another bright spot in a rather dreary season was the fact the ValleyCats hosted the 2017 NYPL All-Star game for the second time.

The start of the 2017 campaign almost mirrored the start in 2016.  The ValleyCats limped out of the gate going 4-7 in the seasons first month, and continued to struggle in July going 14-16.  There was a nice stretch in August when the ‘Cats won six out of seven, but they’d finish up the month 14-16 like the month before.  The season would end in September a touch earlier than other teams due to weather.  Rain in Vermont and upstate New York forced the cancellation of the last three games of the season, and since the schedule is tight in this league the games didn’t get made up.

The ValleyCats did take the field on the last day of the season against the Connecticut Tigers and had an amazing start.  They hit for the cycle in the first inning scoring five runs.  Unfortunately though, the rains came blowing in and as quickly the crowd was swept away back into the parking lots, so were the statistics of that game which are lost forever.  Since the game was cancelled nothing from it was retained and only those in attendance, and maybe a select few listening on the radio knew that it actually happened.  It would have been nice for the team to end on a high note, but there is always next year.

There were several players that did make an impact, as is the case every season.  Kristian Trompiz played for the ValleyCats for about a month and was real good.  In his 25 games in Tri-City, before being promoted to Quad Cities, Trompiz hit .338 with 26 hits (six doubles) and five RBI.  Jake Adams, who was the Astros 6th round pick in the 2017 draft demonstrated some power.  Not only did he hit 10 home runs during his 48 games of professional ball, he won the Home Run Derby at the All-Star game in front of the home crowd.  He hit some bombs that were sent to places at “The Joe” that no other player has sent them.

One of the pitchers that stood out was Reggie Johnson.  Johnson appeared in 12 games for the ValleyCats, posting a 5-0 record with an ERA of 1.69.   He struck out 28 in 21.1 innings and allowed just four walks.  Pitching wasn’t the strong point again this season for Tri-City, but there were still decent outings by several.

J.J. Matijevic, 2B
Matijevic was drafted in the second round of the 2017 MLB draft out of University of Arizona.  He signed his first pro contract shortly after and was assigned to the ValleyCats.  He had a very productive first professional season leading the ValleyCats in several offensive categories.  He earned a promotion at the end of the season to the Quad Cities River Bandits where he appeared in six games.  It it likely that he will start 2018 in the Midwest League but not certain.

J.B. Bukauskas, P
The Houston Astros selected Bakauskas with the 15th overall selection in 2017.  After starting out playing for the Gulf Coast Astros, he was sent to Tri-City at the beginning of August.  He made two starts for the ValleyCats going six innings overall.

Corbin Martin, P
Martin was another 2017 draftee from Texas A&M.  He appeared in eight games for the ValleyCats both as a starter and a reliever.  He went 0-1 with an ERA of 2.60 and did earn a save as well.

Well just like it was said last season, it is very difficult to predict what the season will bring to a Short Season Single-A team.  There are plenty of players that were on the roster in 2017 that could see time again in Tri-City in 2018 but its hard to speculate who.  Morgan Ensberg should have an easier time in his second season ever as a manager now that he has one season under his belt.

The ValleyCats finished third again in attendance in the New York-Penn League with 142,922.  It seems that if the last couple of games weren’t cancelled they would have jumped up into the number two spot.  They were second in average attendance behind the Brooklyn Cyclones who usually own that category.