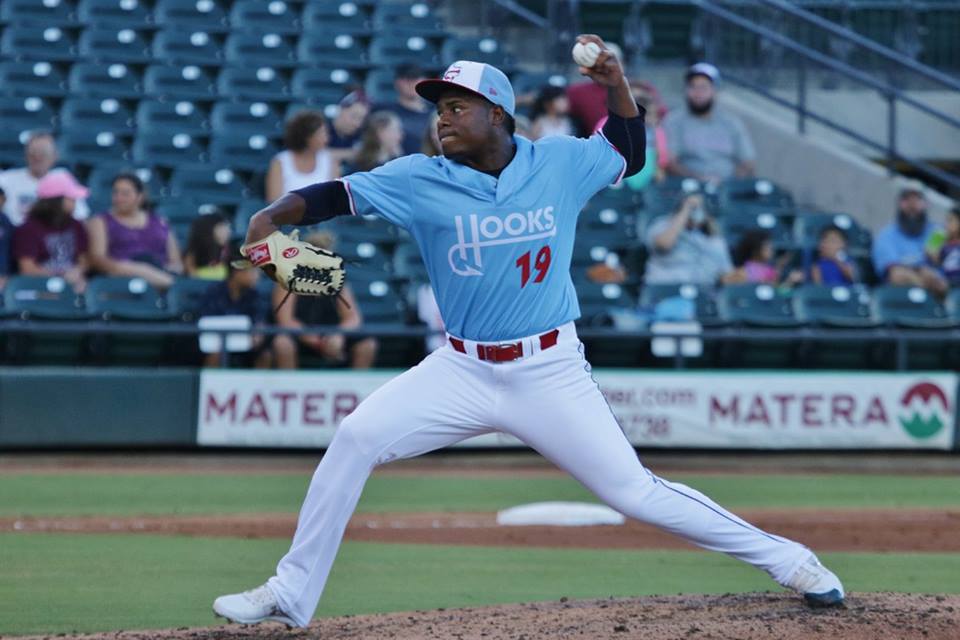 Now that the trade deadline has passed, and the season is more than half way over, we will re-rank our top 30 prospects. Here is numbers 30-21!.

Arauz was acquired by the Astros in the trade that brought Ken Giles to Houston. He is very young, just 18 this year, but has already played two seasons stateside and playing in his third in 2017. While he doesn’t have a tool that really stands out, his tools across the board rank out at least average. He is a switch hitter with good bat speed and a line drive approach. At just 16 years old he made his stateside debut (with Phillies) hitting .254 in 44 games in the GCL. In 2016 he played with Greeneville and hit .249 in 53 games. This year has been tougher on him but he still has a lot of potential. He is a very good defender as well. He is listed at 6’0″ and 150 lbs but should be able to add more weight and strength as he matures.

Matijevic was selected by the Astros with the 75th overall pick (2nd round) of the 2017 draft. This pick was acquired from the Cardinals in the hacking scandal. The Astros were rumored to be interested in Keston Hiura early but ended up getting Matijevic later and both possess similar skillsets. Matijevic had a solid college career having a breakout junior season hitting .383 with 30 2B, 10 HR, 65 RBI for Arizona. He is a left handed hitter but doesn’t really have a position (though he has played left field for Tri-City). Matijevic dominated the Cape Cod League hitting a combined .346 in two different seasons. He is a polished hitter and should be one that can move quickly through the system.

Deetz was drafted by the Astros in the 11th round of the 2014 draft. He possesses a big time fastball and a wipeout slider. He had a very good 2015 season posting a 1.70 ERA over 63.2 innings. In 2016 he improved his strikeout rate averaging nearly 9 per nine innings. He was eventually promoted to Double-A where he made two starts and dominated allowing zero runs and 2 BB/17 K in 12 innings. Deetz is a very athletic pitcher at 6’1″ 195 lbs. Deetz has a mid 90s fastball and a smooth delivery. He has a wipeout slider but still struggles with his command at times. Deetz started this season in AA and dominated posting a 1.82 ERA in 8 outings before being promoted to AAA. He could probably help Houston’s bullpen right now.

Joe Perez was the Astros 2nd round pick (53rd overall) in 2017. He was highly thought of as a starting pitcher but it was known he would need Tommy John surgery. However, the Astros drafted him as a third baseman. As an hitter, he possesses huge power and is a good enough athlete that he should stay at third. Perez did indeed have surgery right after signing with the Astros but he should be ready to roll in 2018. He was also drafted at just 17 years old, making him a year younger than the average high schooler, so he actually won’t lose any development time compared to the normal high school prospect.

Sierra was signed by the Astros out of Venezuela for $1,000,000 in 2014. Sierra stands at 5’11” and listed at 165 lbs. In 2016, he started the season with Greeneville and showed off some of his tools. In just 31 games with Greeneville he slugged .620 with 11 HR. He was then promoted to Tri-City where he struggled a bit, though he was 3.1 years younger than the average player in the NYPL. Scouts note he has a very quick first step and soft hands, leading many to believe he will be a plus defender at shortstop. At the plate, he shows good pop for his size but needs to work on his pitch recognition. He still has a ways to go but has as much upside as any middle infielder in the Astros system. He has gotten off to a slow start but is still just 19 years old.

The Astros just signed Rodriguez in June of this year. The 20 year old is listed at 6’4″ and 205 lbs. Elian is an athletic pitcher with a mid-90s fastball. His slider is his best secondary pitch and can be a legit weapon. He also has a changeup and curveball, though both are behind the slider in terms of development. He is still very projectable and has the makings of an elite power arm. He has made a handful of starts, and while they haven’t gone well, its tough to get a feel for statistics while in the Dominican Summer League.

Alcala was signed out of the Domincan Republic in 2014. Alcala has a very good fastball and slider in the mid 80s. He also possesses a changeup, though its still a work in process. He has the makings of a high potential starter but will need to refine his command as evident by his 37 walks in 79.2 innings this season. Worst case for Alcala could be a late inning bullpen guy given his raw stuff. He is listed at 6’3″ and 180 lbs so he still has room for projection. Alcala has been very good in his minor league career posting a 2.52 ERA in 168 innings.

Valdez was signed by the Astros in March 2015. It didn’t take him long to debut as he tossed 36.2 innings for the DSL Astros that same summer. Valdez started the 2016 season in Greeneville where he had a 1.69 ERA with 15 K in 10.2 IP. He was promoted to Tri-City where he continued to pitch well with 28 K in 21.2 IP and a 3.74 ERA. He continued the climb moving to Quad Cities posting a 3.06 ERA with 35 K in 35.1 IP. He finished the season making one start for Lancaster. He has a low to mid 90s 2 seam fastball which helps generate a ton of ground balls. He also has a good curveball and changeup. He has been solid in 2017 posting a 3.36 ERA between A+/AA. He has also posted very good groundball rates this year.

Straw was drafted by the Astros in the 12th round of the 2015 draft. In the 2016 season he played in 76 games in the outfield with 31 games in RF, 26 games in CF, and 20 games in LF. Straw made his full season debut on May 20th and it didn’t take him long to get going. He finished May hitting just .257 but hit .326 in June and then hit .423 in July. He finished the season with a .358 BA and 124 hits in his 87 games played. While he doesn’t have a ton of power, he has a solid hit tool, ability to draw a walk, and a strong arm in the outfield. This season he has more walks than strikeouts and improved his stolen base percentage.