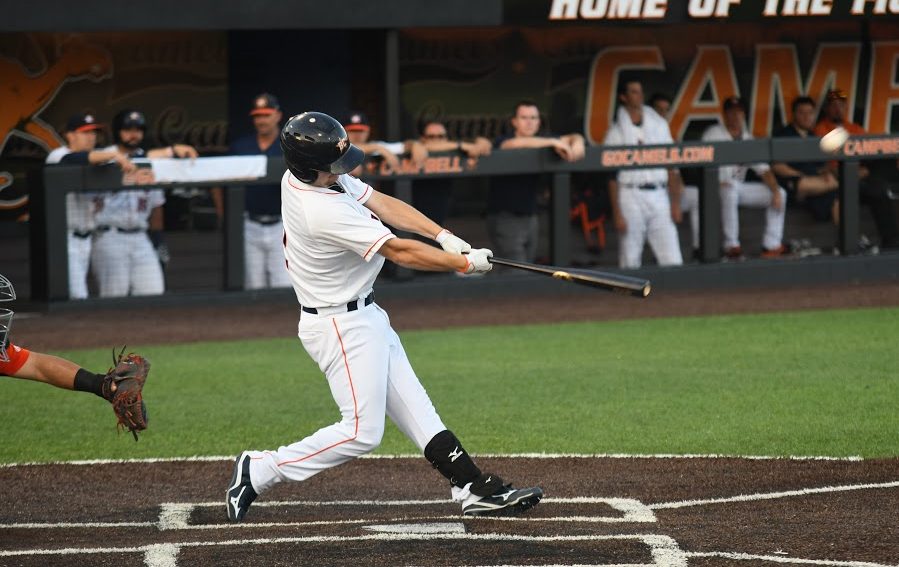 Now that the trade deadline has passed, and the season is more than half way over, we will re-rank our top 30 prospects. Here is numbers 20-11!

Laureano, 16th round pick in 2014, had a breakout 2016 season. He started the season with Lancaster and hit .317 with 10 HR, 60 RBI in 80 games. Lancaster is a great place to hit but he went to Corpus and hit even better slashing .323/.432/.548 in 36 games. Laureano also stole 43 bases and drew 70 walks. He showed some good power and has a nice line drive stroke. He has played all three outfield positions but might profile best in right field. The speed (43 SB) and patience (70 BB) combination is great to see from a young player. Unfortunately, he has struggled in 2017 with Corpus hitting just .221 in 96 games.

Another late round pick for the Astros that has blossomed, Ferguson, was drafted in the 19th round in 2015. After making his full season debut for Quad Cities just months after the draft, he had a very good full season debut in 2016 hitting .315 with 17 HR, 30 SB between A+/AA. He has very good speed and is a solid defender in the outfield. So far in his career, he has shown the ability to hit for average and show some pop. He is a bit older but continues to defy the odds. Ferguson also mentioned in this interview, that he has always been interested in analytics so the Astros were a great fit for him. He was just recently promoted to AAA and made his debut last night.

Nova was originally agreed to sign with the Marlins for $2.5 million but tested positive for steroids causing Miami to back out. The Astros swooped in and were able to sign him for $1.2 million. This isn’t the first time the Astros signed a prospect after failing a test, they signed Michael Feliz for just $400,000 after he had a positive drug test. According to MLB.com, he has drawn comparisons to Hanley Ramirez and Edgar Renteria. Scouts note that he has the potential to hit for average and power with a quick stroke. Nova also has plus speed and arm strength. He debuted this year at just 17 years old and has held his own hitting .302 in 31 games.

Another compensation from the Cardinals hacking scandal, the Astros selected Martin 56th overall in this year’s draft. Martin was an enigma in college. He would be dominant one point, and then lose his command the next. Scouts were torn on him being a starter or reliever but a solid performance in the Cape Cod League helped raise his stock. As a junior at Texas A&M he struck out 95 in 87.2 innings. He has an easy mid to high 90s fastball and a very goo curveball. If he controls his pitches, he could really fly up the prospect rankings.

Stubbs was drafted by the Astros out of USC in 2015. He was known as a great defender but has really made good strides with the bat. In 2015, he played in 36 games hitting .263 with an insane 21 BB/5 SO ratio. Stubbs started the 2016 season with Lancaster and got off to a nice start slashing .305/.399/.473 in the first half of the season. Stubbs was eventually promoted to Corpus Christi where he hit .325/.401/.517 over 31 AA games. Overall he threw out 51% of base stealers in 2016. Stubbs flew up the rankings due to his solid hit tool and athleticism. He has struggled some this year but has still posted a very good walk to strikeout rate.

Astros signed Celestino for $2.25M in 2015. Celestino was seen as one of the most polished prospects available with elite athleticism and instincts in center field. He has above average speed and a strong ability to hit for average and power. In his first taste of professional ball he started out playing for the DSL Astros where he hit .279 with .388 OBP and 25 BB/23 SO in 38 games. Scouts have likened him to Albert Almora of the Cubs. While Celestino has a lot of upside, he has a pretty high floor given his on base ability and defense in center field. He has been good this season hitting .286 with a .745 OPS.

Martin was drafted in the 8th round of the 2013 draft and has steadily moved through the system. After spending the first couple seasons in rookie ball he hit .270 with 8 HR for Quad Cities in 2015. In 2016 Martin had a very good season hitting .270 with 23 HR, 75 RBI, and 20 SB in 110 games for Lancaster. He is another power/speed combo outfielder in the Astros system. He has improved on his 2016 season and hit a combined .279 showing off his power with 27 2B, 16 HR between Buies Creek and Corpus Christi. He has a nice, compact left handed stroke and should continue to rise up prospect boards.

Rogers was a 3rd round selection by the Astros in the 2016 draft. Coming out of college Rogers was known as one of the best defensive catchers in the draft, but the bat was a little behind the glove. Rogers hit .233 with a .718 OPS following the draft. Given his defense, evaluators noted that even a solid bat would move him up the rankings. Well he has done even better than that. Between Quad Cities and Buies Creek he is hitting .270 and showing off some power with 19 doubles and 15 HR. A great defensive catcher with solid power will definitely have a place on an MLB team.

Davis was drafted by the Astros in the 3rd round of the 2014 MLB draft. His first full season in the minors (2015) he put together a strong year hitting .289 with 26 HR. Davis played the entire 2016 season with the Corpus Christi Hooks and again proved his value at the plate. He finished hitting .268 and lead the Astros minor league system in HR (23) and RBI (81). He has some swing and miss in his game but when he makes contact he can do a lot of damage. Davis is an adequate defender with a very strong arm. He started the 2017 season with Corpus improving in almost every category before earning a promotion to AAA.

Perez originally agreed to a deal with the Astros worth $5.15 million but the deal was voided due to a physical. Perez was later signed for $2 million. Perez is just another prospect from Cuba making the move to the MiLB. Perez possesses a low to mid 90s fastball. MLB Pipeline notes that he has a slider and curveball, which sometimes mix together but has the makings off a plus pitch. He also has a changeup that shows potential. He has very advanced pitchability that should help him move through the system quickly. The only knock on him right now is his size (5’11”). He made his debut this season and has held his own pitching well for Quad Cities and Buies Creek.

In this article:astros, Houston, prospects