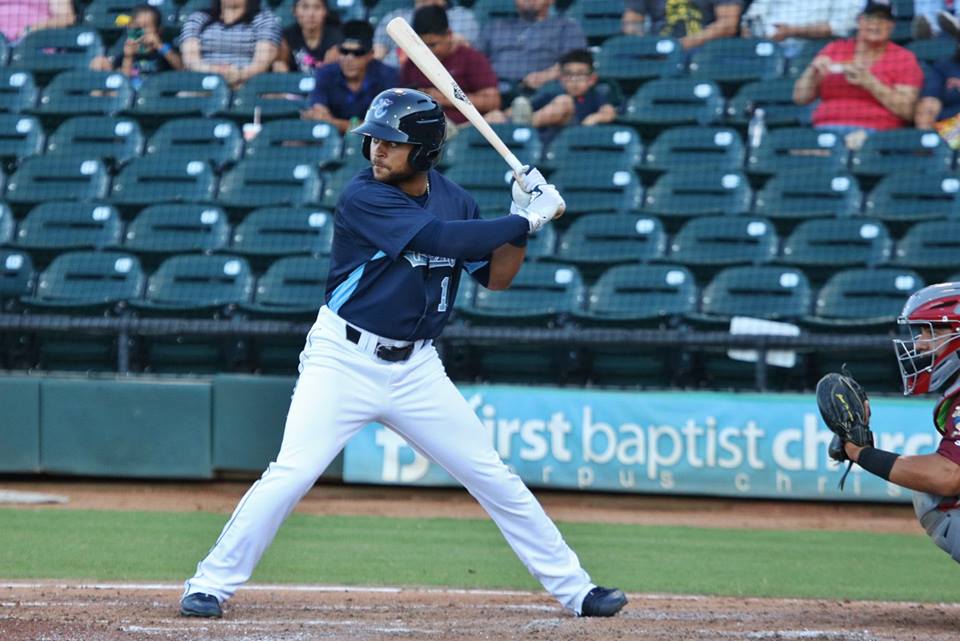 With All-Star Game season upon us, a few of the Astros minor league teams didn’t have full weeks, so you’d think that picking a Player of the Week would be easier.  Well it wasn’t.  There were a couple of past winners in the conversation along with some newcomers.  An argument can really be made for any of them, but that is what makes baseball great.  You can never be wrong as long as you have something to back up your choices.  I do, and with that said, the Astros Future Player of the Week is Jason Martin of the Corpus Christi Hooks.

Martin had a terrific week that unfortunately saw a 14-game hit streak snapped.  He went 12-for-29 (.414) hitting the weekly cycle, with three doubles, two triples, a home run, and four driven in.  He scored five times and also swiped a bag.

The Houston Astros made Martin their 8th round selection in the 2013 draft out of high school.  After signing shortly after the draft, the Astros assigned him to their Gulf Coast League team.  He played 50 games in his first professional season batting .251.  Martin would split time between the Greeneville Astros and the Tri-City ValleyCats in his second season ending with similar statistics.

Martin would have his break-out season in 2016 playing for the Astros former California League affiliate Lancaster JetHawks.  For the season Martin became a 20-20 guy, with 23 home runs and 20 stolen bases.  He hit .270 in 110 games with 75 RBI.  He’d start 2017 playing for the new Class-A Advanced Buies Creek Astros.  After having a great start there, the Astros promoted him to Double-A Corpus Christi at the end of May where he has been great.

He’s played in just 18 games at the new level but is batting .352.  Martin has tallied 25 hits so far, and 11 of them have been for extra bases.  The Astros must be thrilled with yet another quality outfielder in their system.

Congratulations to Jason Martin on being named Astros Future Player of the Week for the week of June 16-22.

I had said in the beginning that there were a couple of former winners that were in consideration for the weekly honors.  Kyle Tucker joined the Hooks with Martin at the end of May and has found a home.  This past week Tucker went 9-for-32 (.281) with four home runs and seven RBI.  Two more Hooks that had terrific weeks were J.D. Davis (former winner) and Jon Singleton.  Davis went 9-for-26 (.346) and Singleton had a lower average (.276) but hit three home runs and drove in seven.

The Fresno Grizzlies who seemingly score 10+ runs a game lately had a couple in the discussion.  Tyler White went 9-for-25 and hit two home runs and drove in nine.  My apologies for missing last week’s award which would have been  Colin Moran, but he continued to hit well this week adding three more home runs.  Andrew Thome of Corpus Christi appeared in three games for the Hooks, picking up a win, two saves, while striking out six in four innings without allowing a run.