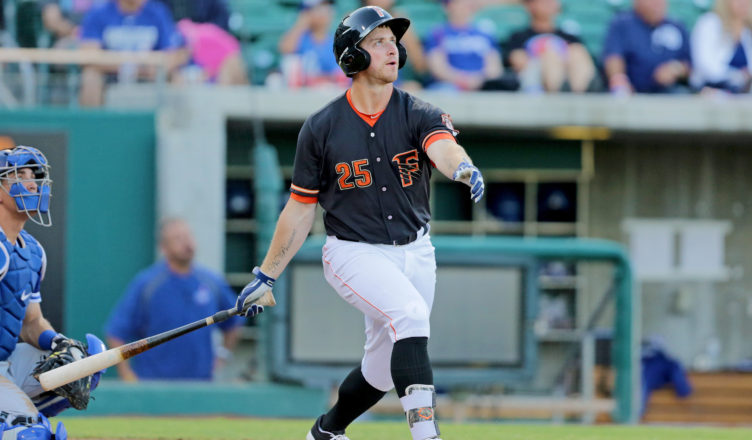 Hard to believe we are entering the second month of the season already.  This week saw games postponed because of weather, but there was still plenty of action and certainly some standout players.  Usually when I have a player in mind, they take it on the chin in the final day and change the course of everything.  Luckily for me, and his 2-for-4 night, Jon Kemmer made a liar out of me and took home this weeks Astros Future Player of the Week honors.

Even with a loss every other day this week for the Fresno Grizzlies, Kemmer performed well despite that.  He ended his week going 13-for-31 (.419) scoring eight runs.  Kemmer also added four doubles, two home runs, and seven RBI.  He has recorded at least one hit in five of his last seven games and is hitting .320 on the season.  His most productive game this week was April 30th against the Reno Aces in a slugfest.  Kemmer was 3-for-6 driving in five of his seven runs for the week.

Kemmer was the Houston Astros 21st round selection in the 2013 draft.  He has made his way through the system at a decent pace playing at every level in the minors.  This is his second season in Triple-A and it looks like he is well on his way to possibly making the leap to MLB at some point.  Roadblocks in Houston with the likes of George Springer and more seasoning could be the reason Kemmer hasn’t already made his debut.

In his professional career so far, Kemmer has about an even split with games played in right field and left field.  He has even mixed in a couple games at first base too.  He has hit at every level he’s made it to and has a career average of .284 in 401 games.  He does strikeout at a fairly high rate but that could change in time.  Kemmer also has the ability to hit the ball out of the park which adds another dimension to his game.

Marcos Almonte had himself a strong week for Quad Cities, but as it was mentioned earlier missed three games due to weather.  Even with that though, Almonte was 6-for-12 with two home runs and seven RBI.  He could have certainly contended for this award with a full slate of games.

Former Astros Future Player of the Week A.J. Reed tried to get himself more hardware with the week he turned in as well.  His .462 batting average for the week was a touch better than Kemmer’s, but it was in fewer at-bats.  Reed still should hold his head high by his narrow defeat as he still continues to improve in the minors.

Daz Cameron who started the week with a career day (3-for-5, 3B, HR, 7 RBI) fell victim to the weather in Quad Cities and also a minor slump going hitless in his final three games of the week.  Garrett Stubbs displayed some power knocking three out of the park this week driving in five.

On the pitching front, Dayan Diaz appeared in two games for Fresno.  In his three innings of work he didn’t allow a run and struck out six.  Brett Adcock made one start (Thursday night) picking up the win for Quad Cities while striking out 11.  Nick Hernandez also had a good week picking up two saves in three appearances for Buies Creek,with six strikeouts in 2.2 innings.