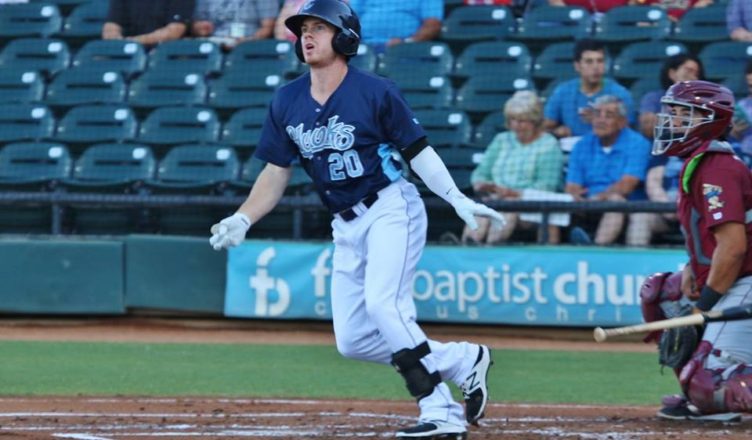 After gaining some ground in the Texas League’s South Division last week, the Corpus Christi Hooks continued that momentum this week.  The Hooks are now over .500 and sit just three games out of first place.  One of the players that helped contribute to that success was Drew Ferguson.  Ferguson helped lead the Hooks to a 5-2 week, thus being named Astros Future Player of the Week.

Ferguson joined the Hooks in August of last year after being promoted from Lancaster.  He enjoyed some success at the new level although it was just 15 games.  This season he started out with the Hooks and built on that success.  He was drafted by the Astros in the 19th round of the 2015 draft, and has been making his way through the system.  With the log jam in the outfield in Triple-A and in Houston, it seems as though Ferguson will play the whole season in Corpus Christi.  Of course that could change.

One of Ferguson’s teammates also had a great week.  Rogelio Armenteros started two games for the Hooks.  He pitched 10.2 innings allowing no runs and giving up just four hits.  Added to that were his 13 punch-outs, but unfortunately both outings were no-decisions.  Armenteros is 2-1 with a 1.08 ERA this season for Corpus Christi.  He has appeared in nine games making seven starts.  He was recorded 55 strikeouts in 41.2 innings of work.  Definitely someone to keep your eye on.

Cionel Perez threw seven no-hit innings on May 22nd against the Peoria Chiefs.  He was lifted after throwing 78 pitches by Quad Cities manager Russ Steinhorn.  It was the best outing by far this season for Perez and the longest.  His 10 strikeouts is also a career high.  This is the first season for the 21-year old Cuban native and is having a see-saw type start to his professional career which is to be expected.

Buies Creek Astros outfielder Jason Martin put together a week worthy enough to be mentioned.  Martin went 10-for-26 (.385) and hit the weekly cycle.  He recorded a double, a triple, and a home run, while driving in four, and scoring five runs of his own.  Martin who is also 21-years old, was drafted out of high school by the Astros in 2013.  On the year he is hitting .294 with seven home runs and 28 RBI.