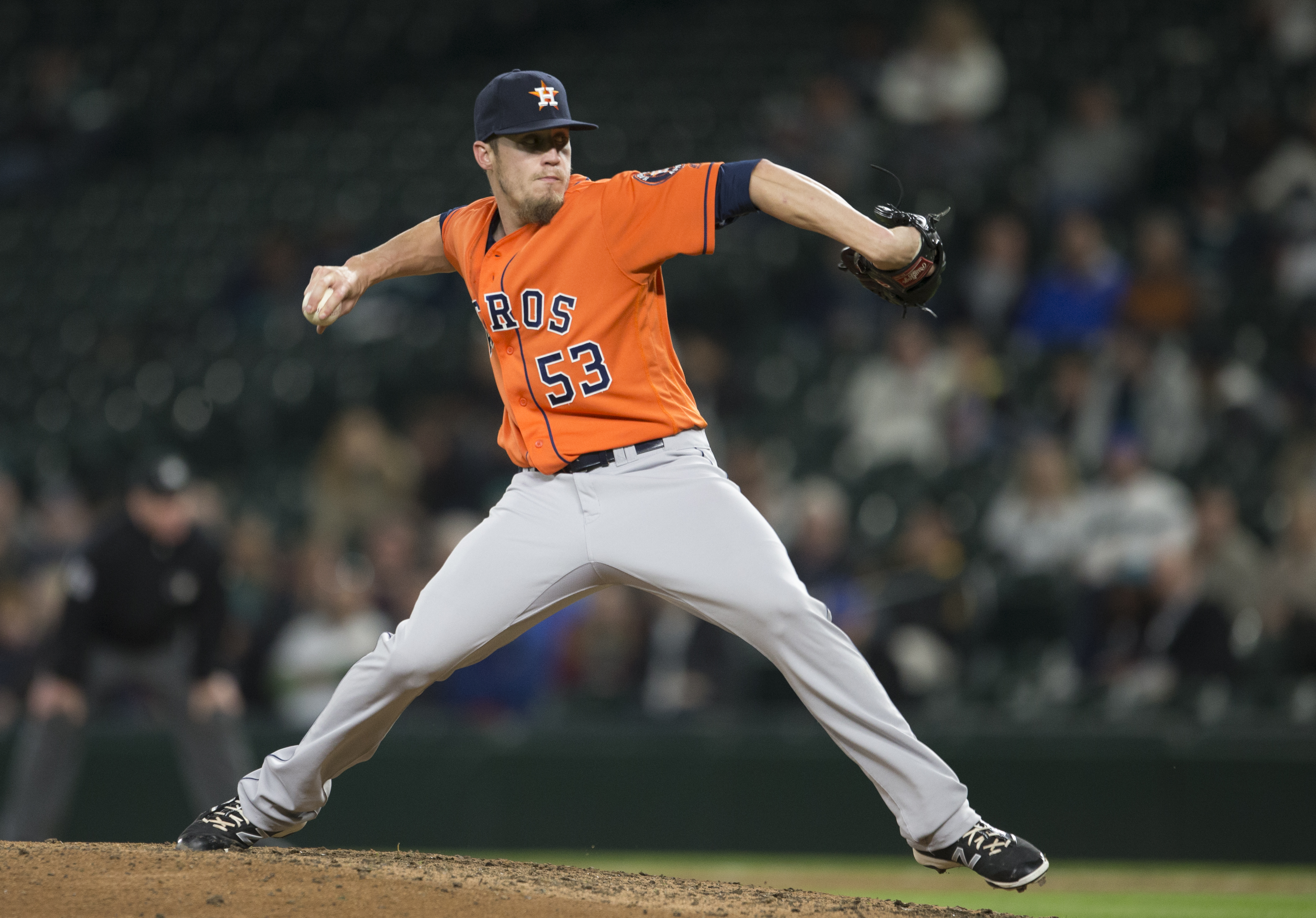 SEATTLE, WA - APRIL 27: Ken Giles #53 of the Houston Astros delivers a pitch during the eighth inning of a game against the Seattle Mariners at Safeco Field on April 27, 2016 in Seattle, Washington. The Astros won the game 7-4. (Photo by Stephen Brashear/Getty Images)

Ken Giles Will Dominate in 2017

I have seen the following questioned posed on Twitter and other forums: “Who will be the Astros closer in 2017?” Really, this shouldn’t even be a question. The closer will be Ken Giles and here is why I think he will dominate in 2017.

Back in December 2015, the Astros traded Vince Velasquez, Mark Appel, and other prospects for up and coming closer, Ken Giles, and shortstop prospect, Jonathan Arauz. Many believe the Astros gave up a lot, and they did, but they also received a very young, cost controlled closer, and a decent prospect to boot.

Following the 2016 Spring Training, AJ Hinch announced that Luke Gregerson would start the season as the Astros closer. Giles was used as a late inning guy and, unfortunately, the 2016 season got off to a rough start. Giles finished April with a 9.00 ERA in 10 IP. He allowed 4 HR in April, more than he allowed in his first two seasons combined.

He turned it around in the middle months posting a 2.28 ERA with 11 BB/68 K in 43.1 IP from May through the end of August showing how dominant he can be and taking back the closer role. He had a couple rough outings in September, though the Astros were already out of contention by that point. He finished with a 4.11 ERA and 102 K in 65.2 IP good for 14.0 K/9 (career high) and 15 saves.

Clearly, the 2016 season was not what the Astros and their fans expected when the trade for Giles was announced. While his season wasn’t a complete waste, he did compile 1.5 bWAR, there are some reasons to expect him to return to his dominant self in 2017. First, let’s take a look at xFIP. Here is a definition of xFIP from Fangraphs:

The main takeaway from this is that this formula approximates a pitcher’s ERA using average BABIP and a league average HR to FB ratio. In 2016 Giles has a 14.5% HR/FB ratio. The league average is around 10%. While 14.5% isn’t crazy high, his previous two seasons were at 2.8% and 3.3%. Using a league average HR/FB ratio, Giles’ xFIP came in at 2.67, which was actually lower than his 2015 season. If he reverts back to league average or better, one can expect he will be very good again in 2017.

Next let’s look at his batting average on balls in play (BABIP). This figures how often non-homerun batted balls fall in for hits with the league average being around .300. Giles’ first two seasons he had a BABIP of .267 and .311. In 2016 it jumped up to .349. That was the second highest of all relief pitchers with a minimum of 60+ innings. If this goes down to league average, once again, his overall ERA should look a lot better. Here is another excerpt from Fangraphs about BABIP:

“BABIP is likely even more important when evaluating pitchers because they have almost no control over what happens to a ball once it is put in play. A pitcher can control their strikeouts, walks, and home runs, and through those, the number of balls they allow to be put into play, but once the ball leaves the bat, it’s out of their hands. As a result, pitcher BABIP is heavily influenced by defense and luck, which means the number of hits a pitcher gives up is influenced by things outside of their control. And if hits are somewhat outside of a pitcher’s control, so will their runs allowed totals. This is a long way of saying that pitchers with a high BABIP are most likely victims of poor defense or bad luck, and neither is the pitcher’s fault. Their defense might be attached to them, but their luck is not, meaning that we typically expect most pitchers with extreme BABIP values to regress toward league average going forward.”

I know this was a lot to read there but basically, we can expect Giles’ BABIP to regress toward the league average in 2017. Most of the top closers had BABIP’s around .300 with only Betances having a higher BABIP than Giles. Betances’ ERA was also significantly higher than his FIP and xFIP. Another stat in Giles’ favor is his SIERA (skill-interactive ERA). His SIERA in 2016 was 2.48. Fangraphs notes that SIERA under 2.90 is excellent. Here is Fangraphs explanation but it is another analytical approach for determining a pitcher’s skill level without using ERA.

Now let’s take a look at his contact rates. His overall contact percentage against him last season was the lowest of his career at 61.6%. He had a career high in people chasing pitches outside the zone, and they when did, they only made contact with 35.9% of them (career low). Even his contact rates in the zone were in line with what how he performed the two years prior. So, as you can see, he was missing bats. This was evident by his career high, 14.0 K/9.

I’ve also heard some mention about his velocity being down. Early in the season it was down just a bit but by the end of the season he was averaging 98+ MPH with 98.3 MPH in August, 98.7 MPH in September, and 99.6 MPH in October. He mentioned that his velocity is the last thing to come back after the off-season and mentioned starting his season routine earlier so he is ready to roll in April.

Most would agree that Giles’ slider is among the best in baseball. In 2016, batters hit .093 against his slider. Unfortunately, they hit .375 off of his fastball. The previous two years batters hit just .222 and .248 off of his fastball. Maybe he was tipping his pitches, maybe he was falling into bad counts, or maybe it was just poor luck? With the type of slider he has, he should be able to keep hitters off balance and not sitting on his fastball. This is another “stat” that I expect to regress back towards the league average in 2017.

Just as I stated in my Lance McCullers article last week, these numbers are just that, numbers. The most important thing is what how he performs between the white lines. But these numbers, in my opinion, paint an optimistic picture for Giles in 2017. If his HR/FB ratio and BABIP normalize, the Astros will have the dominant closer they expected when they made the trade in 2015. A scout has told me that Giles is working hard this off-season to be able to dominate in 2017.  You heard (read) it here first, Ken Giles will dominate for the Astros in 2017!

Here is a link to Ken Giles’ Fangraphs page.