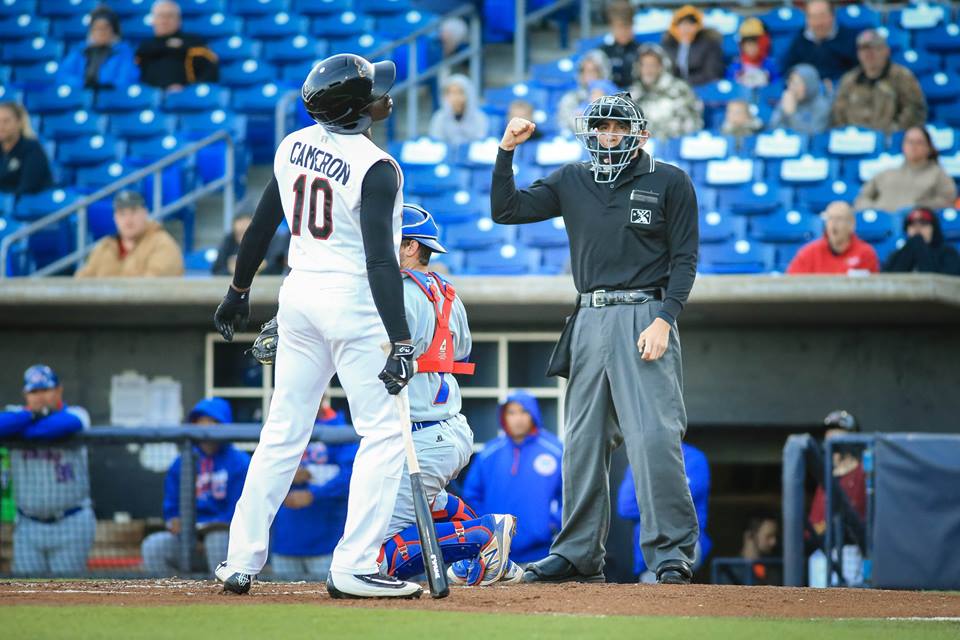 In the 2015 draft, Cameron was selected in the Competitive Balance A round, 37th overall, the third pick taken in day 1 of the MLB Draft by the Astros. Cameron was the second high school outfielder taken in the first round by the Astros behind 4th overall pick Kyle Tucker. However, most believed they would have similar paths to the Major Leagues one day. Both Tucker and Cameron made their pro debuts in the Gulf Coast League shortly after signing with the Astros. Daz hit .222 with 6 RBI’s and swiping 13 bags in 17 attempts in 21 games before being promoted, along with Tucker, to the Greeneville Astros.

Daz Cameron, who began the 2016 campaign with the Quad Cities River Bandits, struggled in his first full season of pro ball hitting just .143 with 6 RBI’s in 21 games. He was then sidelined for an extended amount of time with a hamstring injury before being sent back to extended spring training in Florida in early May. Shortly thereafter, he started the season with the short-season Tri-City ValleyCats of the New York Penn-League in July. His play began to improve immensely before being diagnosed with a broken left index finger towards the end of the year. He hit .278 in 19 games with 2 HR’s and 14 RBI’s, while being just a small sample size, there are strides being made by the youngster Cameron.

As the 2017 season inches closer, there are many Astros prospects that need to have bounce back years. With most of the top talent arriving at the big-league level, a lot of prospects have to prove to the front office that in the years to come, they belong with the other talent around them. Among those prospects is outfielder Daz Cameron. He is not only going into his second full season of pro ball but now more than ever, he has to prove that he belongs in the stout system of the Astros. The projected 2017 outfield is a combination of Josh Reddick, George Springer, Carlos Beltran, Nori Aoki, and Jake Marisnick. Along with that, Teoscar Hernandez, Tony Kemp, and Derek Fisher are all knocking at the door to prove their abilities will stick at Minute Maid Park.

There is no doubt that Astros system has been very deep over the last three years and now more than ever, is very deep at the outfield position. As previously mentioned, Teoscar Hernandez and Tony Kemp are both coming into camp fighting for a spot as a 5th outfielder or to be the first called up for an injury. Along with Hernandez and Kemp, Derek Fisher, who spent 2016 with Corpus Christi and Fresno having a break out year, is also on the door step knocking for a spot in Houston. Ramon Laureano, Jason Martin and Kyle Tucker will all be fighting for a spot in Corpus Christi in 2017 most likely; they are all a part of the Astros top 30 prospects. Past that, the top 30 list includes Gilberto Celestino who hasn’t seen a lot of competition in the states besides 18 games in the Gulf Coast League and Ronnie Dawson who was 61st overall pick in the 2016 draft and will likely start 2017 in the Quad Cities.

Other outfielders to keep an eye on are Jon Kemmer and Andrew Aplin who could fly under the radar as sleepers who could find their way in Houston in 2017 with any injuries or trades. Other intriguing outfielders include Stephen Wrenn who played 36 games with Tri-City and 35 with Quad Cities while slugging 12 home runs in those 71 games and Myles Straw who started the 2016 season with Greeneville and ended it with Lancaster after hitting .358 between two levels (Quad Cities and Lancaster). All this goes to show that not only does Daz Cameron need to have a bounce back year, but many other top prospects need to have break out years to solidify their value in the Astros system.