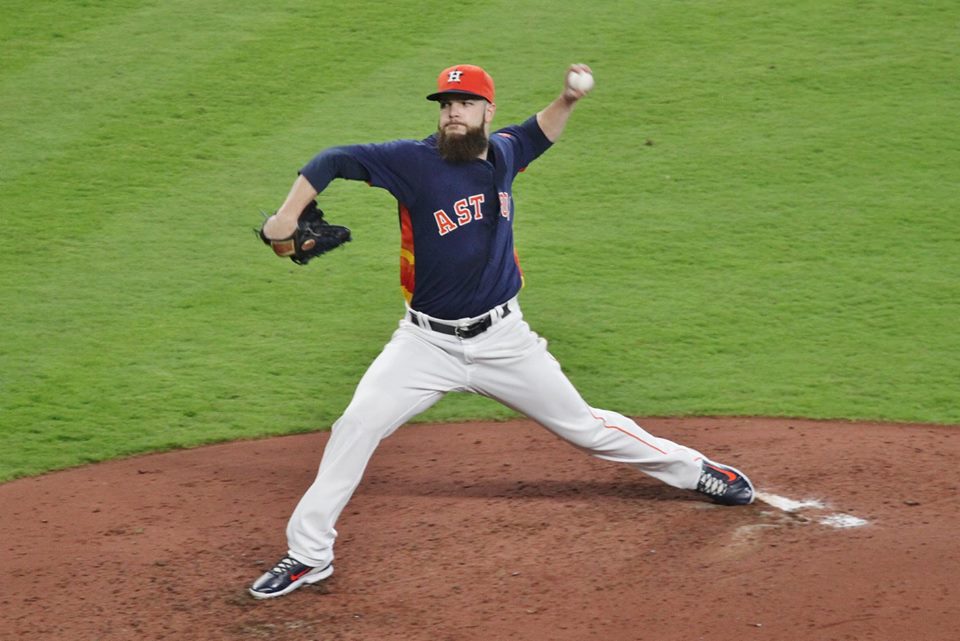 As we continue our series on the Astros’ 2016 Position Reviews, we now shift our focus to Starting Pitching.

Coming off his breakout 2015 Cy Young campaign, Keuchel struggled to find the same success a year later. He lost 12 games, only winning 9, and his ERA skyrocketed by 2 points from 2.48 to 4.55. His WHIP, H/9, HR/9, BB/9 all went up while his K/9 went down. On top of that, Keuchel was shut down with a shoulder injury in September, finishing off a year to forget for Keuchel. While his season wasn’t what many expected, there are some reasons to believe he can turn it back around. His FIP was 3.87 and xFIP was 3.53. He also has the second highest HR/FB rate of his career and a higher BABIP than he had the previous two seasons. Even then, he still posted 2.7 WAR in 2016. His potential bounce back will be a big factor for the Astros’ success in 2017.

Lance began his 2016 season on the DL due to a shoulder soreness, but when he was ready he showed signs of an ace in the making. His curveball is one of the best pitches in baseball and definitely has been a large reason for his success, finishing with a 3.22 ERA, the exact same ERA as his first year. His K numbers skyrocketed, though so did his BB numbers, so consistent control will be a another thing to watch for in 2017. Like Keuchel, McCullers found himself on the DL late into the season will elbow complications, but was able to throw with no pain before the season ended in bullpen sessions. McCullers has shown his worth thought compiling 4.8 WAR in 206.2 career innings. McCullers will look to put together another stellar season in 2017.

McHugh has been a very good pitcher for the Astros since they claimed him off waivers from the Rockies in 2013, and 2016 was no exception despite a decrease in overall production. McHugh isn’t an overpowering pitcher but is able to string together some successful starts and put the Astros into a position to win, which is what you want. He finished the season with a 4.34 ERA but did have a 3.95 FIP. He also had an insanely high BABIP (.338) and a homerun rate higher than any of his previous two seasons in Houston. Heading into 2017, though, he will continue to receive the ball in games and has shown before he can be a solid pitcher in the big leagues

The Astros took a chance on Fister with a one year deal in Free Agency, and it was an up and down year for him. Fister showed up at times and others wasn’t able to start strong and get the job done, so all in all it wasn’t a bad signing, but could’ve been better. He started the season well posting a 3.55 ERA in the first half but saw it jump to a 6.20 ERA in the 2nd half. He completed the year with a 4.64 ERA in in 32 games, and now will see what he can get in a weak free agency class this year.

Fiers in his second year with the club had an average season. He struggled greatly at times, but walked out of the season with more wins than losses and an ERA of 4.48. It’s unsure what his role will be with the club in 2017, as Houston looks at all of its options for improvements to the Rotation. He could find himself in a long reliever role with the team If another starter is added.

Musgrove surprised everyone last year when he struck out a whopping 8 batters in only 4.1 innings of work in his MLB debut, coming in relief. After that terrific display, he found himself in a starting role, pitching in ten more games. Musgrove’s numbers don’t tell the full story, as one bad stretch inflated his statline. From August 18 to September 3, Musgrove’s ERA was 8.53 in 4 games (even with a game in which he pitched 5.1 Innings of shutout baseball). In the 7 remaining games, his ERA was a fantastic 2.08 ERA, showing he can be a dominant pitcher for Houston, so long as he can limit the bad starts. He has dominate stuff that can definitely strike out a ton of Hitters, and despite the 2.3 BB/9 his first go-around, he has exceptional control and most likely will cut down on the walks moving forward.

The Starting Pitching remained healthy for most of the year until McCullers and Keuchel both went down in September. The starters weren’t bad, but improvement is definitely needed. Despite the injuries and inconsistency, the Starters kept the Astros in the playoff hunt until the very end, which is why the grade is a little generous.

This is where it gets interesting. With McCullers and Keuchel, both need to come back at full strength from injuries to improve the unit, and Keuchel needs to return to his 2015 form.

As for the rest of the rotation, most view this as the only weakness left in Houston as they prep for a potential run at a World Series. The Astros have asked on a number of pitchers hoping to bolster the rotation, and names such as Chris Sale, Jose Quintana, Chris Archer, and Danny Duffy have come up.

The price for both Quintana and Sale have have been too steep for the Astros, and with Chris Sale now off in Boston, Quintana appears to be the most possible outcome for the Astros. Unfortunately, the price for him is steep as well. As Peter Gammons reported, the asking price from the White Sox for Quintana was Joe Musgrove, Francis Martes, and Kyle Tucker. In my personal belief, that is too steep to pay, even for a potential upgrade such as Quintana. Musgrove looks to be a big part of the rotation this year, and with Martes knocking on the door of the Big Leagues soon, he could find time as well. As for Tucker, if he continues to develop and rise through the system like he has, then it won’t be long until he’s up and contributing. Unless the White Sox throw out some different names, the Astros appear unlikely to strike a deal for Quintana.

So that leaves the remaining 3 spots to be filled internally, with Musgrove locking one down and a number of others fighting for the other 2. If he can stay healthy (big IF) then Charlie Morton looks like he will take over as the #5 starter. For the last one, the Astros could go with either Mike Fiers, David Paulino, or even Chris Devenski as the Astros’ plans are to make him a starter.

I believe the Astros will acquire a Starter for the right price to plug into the rotation, but until then we have to look how it stands now. I think the Starters are going to be better than expected, with Musgrove really breaking out and Keuchel and McCullers coming back to full-form. If this occurs, the Astros most certainly are on their way to a very successful season.