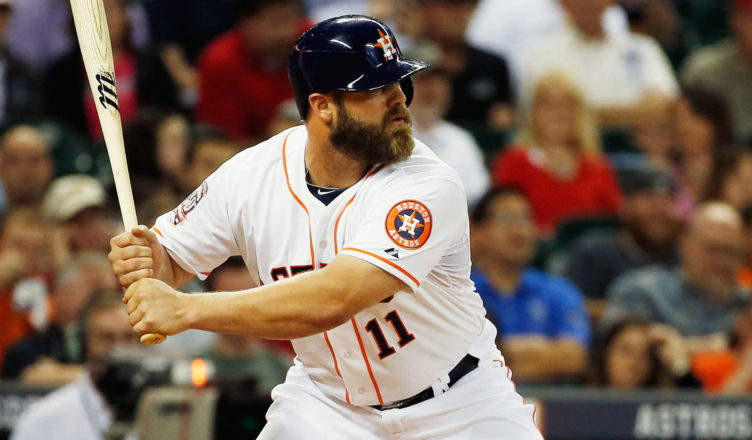 Today we continue our Astros season review series by position taking a look at the designated hitter position.

First and foremost, unlike some teams, the Astros did not have a set designated hitter for most of the 2016 season.  In fact, in 556 official at bats, fifteen different players hit from the designated hitter spot.  Even more staggering was that of those 15 players, 10 of them had double digit at bats from the spot.  For reference sake, the Boston Red Sox had 12 players who had an official at bat from the designated hitter spot last year, but only 2 (David Ortiz and Hanley Ramirez), had more than even 4 at bats, with Ortiz having 527 of them.  With all of that in mind, I am going to focus on the three players who had the most official at bats for the Astros last season.

Preston Tucker had the second most at bats in the 2016 season with 61.  In those 61 at bats over 22 games, Tucker hit .148/.224/.295 with 1 home run, 2 rbi, 5 walks vs. 19 strikeouts and 6 runs scored.  Unfortunately, for Preston, while his younger brother’s stock is on the rise, Preston’s is plummeting.  In 2016 he struggled to stay both healthy and relevant in the Astros lineup.  With the additions made this offseason, it is very likely that Preston will start the season in the minors, and making it back up to the Astros may prove to be a real challenge for him.

Tyler White definitely rode the rollercoaster of consistency in his first season with the Astros.  After winning the first base job out of spring training, White got off to a scorching start.  Unfortunately, he could not maintain that over the course of a full season and eventually lost his position.  While he had some success initially while playing first base, his stats as a designated hitter were not all that pretty.  In 47 at bats over 15 games, Tyler White hit .170/.235/.319 with 1 home run, 4 rbi, 3 walks vs. 13 strikeouts and 3 runs scored.  Like Tucker, White may be on the outside looking in when next year starts and may have to start in Triple A and work his way back up to the big club.

First of all, the fact that the Astros had to use 15 different players in the DH role last year speaks volumes to their inability to find consistent production and it shows when you look at the numbers.  In 556 DH at bats last year, the Astros, as a team, hit .218/.299/.378 with 19 home runs, 63 rbi’s, 60 walks vs. a staggering 172 strikeouts and 64 runs scored.  For a team that is in a window where they should be competing in the playoffs every year, those number are just not good enough out of the DH spot.