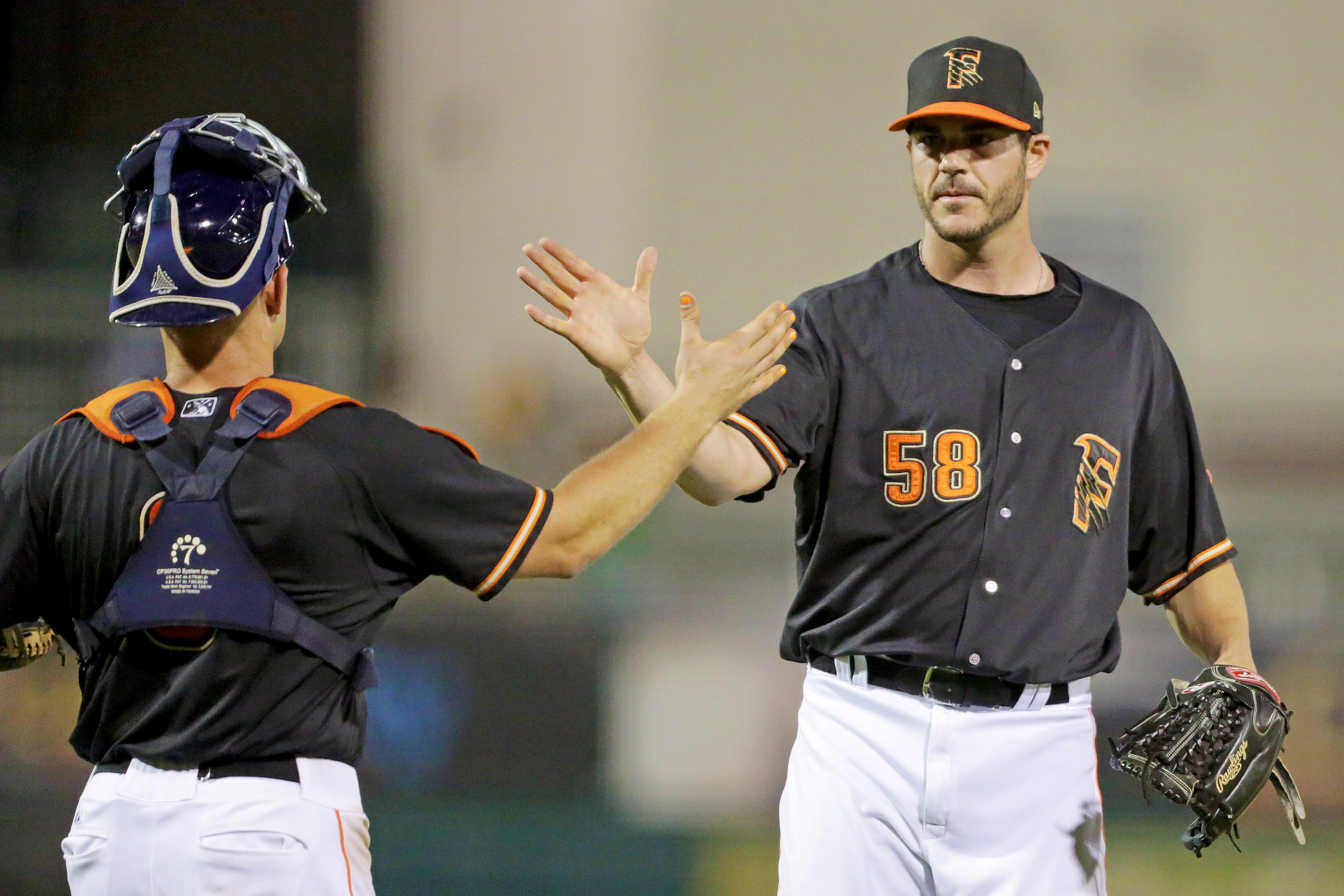 This week we take a look at the relief pitcher in the minor league system.

Hoyt had one of the most dominating seasons I have seen for a relief pitcher. He was acquired prior to the 2015 season in the Evan Gattis deal. He had a solid 2015 season but really made a name for himself in 2016. In AAA he allowed just a .198 BAA while striking out over 15 per 9 innings. Hoyt picked up 29 saves for Fresno before being promoted to Houston. With Houston he had a 4.50 ERA but still struck out 28 hitters in 22 innings. This also came with an insane HR/FB rate, which should go down. I expect Hoyt to be a piece of the Astros 2017 bullpen. Hoyt works primarily with a mid 90s fastball, cutter and changeup.

McCurry was acquired by the Astros last off-season in the trade that sent Jed Lowrie back to Oakland. He got off to a dominant start in AA picking up 13 saves with 8 BB/50 K in 39.2 innings. He also posted a 2.27 ERA. He was eventually promoted to AAA where he ERA went up a bit (3.83) but he still showed off the strikeout ability whiffing 44 hitters in 42.1 innings. McCurry has very good control, and while he isn’t overpowering, he has a plus curveball and changeup and does a good job keeping hitters off balance.

Dorris has defied the odds thus far going from undrafted to AA in less than two seasons. He started this season with Quad Cities where he had a 4.22 ERA (2.84 FIP) in 10.2 innings with 11 strikeouts. He was promoted to Lancaster where he turned it up posting a 3.43 ERA with 65 K in 42 IP. This earned him a promotion where he had 1 BB/16 K in 9.2 IP and a 1.86 ERA. Dorris is a side-armer with a fastball in the mid to high 80s but he continues to miss bats with his wipe-out slider.

Gustave is a definite fireballer with his fastball averaging high 90s. He had a very good 2015 season leading to high expectations in 2016. He started off the year great with a 2.53 ERA but hit a rough patch in May and June allowing 16 ER in 23.1 innings. He turned it around and was eventually promoted to Houston where he struck out 16 batters in in 15.1 innings with a 3.52 ERA. Like Hoyt, Gustave figures to be in the mix for the Astros 2017 bullpen.

Deemes is another late round pick by the Astros that is having success. After having a solid debut in 2015, he pitched across three levels in 2016. He started with Quad Cities but was quickly moved up after allowing just 2 runs in 20.2 innings. He went to Lancaster (hitter’s paradise) and held his own with a 4.43 ERA in 44.2 innings. Deemes finished the season with Corpus Christi where he tossed 8.2 shutout innings.

I sound like a broken record, but Jankowski is another late round pick finding success. He was drafted by the Astros in the 34th round of the 2012 draft. Jankowski has had success at every stop in the minors and 2016 was no different. Pitching primarily in relief, Jankowski struck out 103 batters in just 71.2 innings. His two seasons in AAA he has a 2.81 and 3.36 FIP. The Astros bullpen is crowded but Jankowski will get a chance eventually.

Ferrell was drafted by the Astros in the 3rd round of the 2015 draft. Many expected him to be a fast riser in the Astros season. He got off to a solid start racking up 14 K in his first 10 innings this year. Unfortunately, he missed time and ended up having surgery on an aneurysm in his throwing shoulder causing him to miss the rest of the 2016 season. Ferrell is a hard thrower and one many will be counting on in 2017.

Guduan is a flame thrower from the left side, which bodes well for his future. To this point, he hasn’t been able to fully harness it posting a walk rate of 7.1 BB/9 in AAA this season. He started well in AA though striking out 19 in 13 innings before the promotion to AAA. The Astros added him to the 40 man roster to prevent him from becoming a minor league free agent.

Hernande was just drafted this season out of the University of Houston after posting a 1.40 ERA with 66 K in 51.1 innings as a junior. Hernandez joined Tri-City after the draft and had an immediate impact picking up 6 saves and posting a 1.86 ERA with 23 K in 19.1 IP. He was then moved up to Quad Cities where had a 1.35 ERA in 6.2 IP. He figures to be one of the better relievers in the Astros system next season.

The Astros system has a good pile of relievers with many of them bring MLB ready (Hoyt, Gustave, McCurry). All three will probably pitch with the Astros at some point in 2017. Below them is a few up and comers like Ferrell and Hernandez. Mix in the guys like Dorris, Deemes, Hernandez, Guduan and the Astros have a solid group of guys to help in the future.