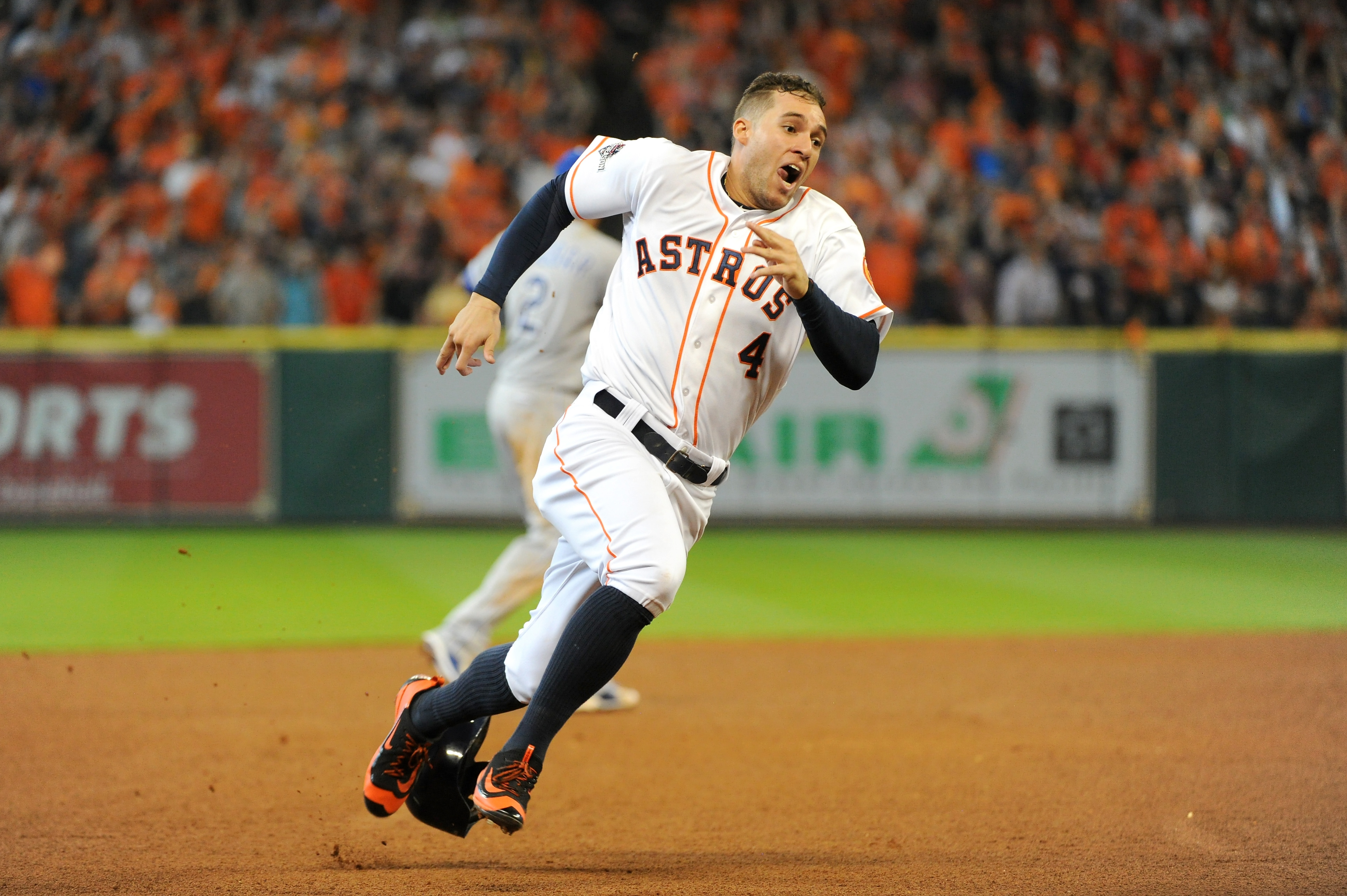 HOUSTON, TX - OCTOBER 12: George Springer #4 of the Houston Astros rounds the bases to score the go ahead run on an RBI double in the fifth inning against the Kansas City Royals during game four of the American League Divison Series at Minute Maid Park on October 12, 2015 in Houston, Texas. (Photo by Eric Christian Smith/Getty Images)

Why George Springer Is Untouchable

The offseason is one of the craziest periods in baseball every year due to teams looking to upgrade everywhere they struggled during the season or teams unloading the talent they have to start rebuilding for the future. Teams are linked to every high profile free agent and every blue-chip trade candidate throughout the duration of the offseason, keeping fans on the edge of their seats and constantly checking their phones, basically taking the trade deadline and stretching it into a 5 month period of time.

The Astros are the new kids on campus in the contender market, having spent the previous offseasons in rebuilding market, unloading cheap, talented players in exchange for high upside prospects and prepping for the future of the franchise. The future has finally arrived, however, and the Astros are now in uncharted territory with a new mindset for 2017.

Meanwhile, the Astros’ foes from 2005 have started the beginnings of a rebuild. The White Sox have a lot of young talent they are looking to unload, but the price will not come cheap for the talent the team from the AL Central possesses. The crown jewel without a doubt is left handed ace Chris Sale. Sale has been one of the best pitchers in baseball since his debut in 2010, and given the lack of quality pitchers in free agency, Sale’s price tag is currently through the roof, but with good reason.

The Astros have been linked to a number of players and pitchers in the short time the offseason has been in progress, having already signed OF Josh Reddick and traded for C Brian McCann while being linked to other names such as Edwin Encarnacion, Carlos Beltran, and, yes, Chris Sale.

The Astros’ fans hear the connections and dream of the 2015 Cy Young winner Dallas Keuchel, Strikeout Specialist Lance McCullers, and 4-Time Top 5 Cy Young Award finalist Chris Sale anchoring the top of the rotation. But as stated before, the price to acquire Sale will not be cheap.

Most believe in order for the Astros to strike a deal with the White Sox for Sale they would have to include one of Alex Bregman or George Springer along with a number of top prospects just to get the ball rolling in discussions. Jeff Luhnow, however, recently tabbed both as untouchable, displaying no desire to break apart the young cornerstones that will be huge pieces for the Astros moving forward. We’ve seen the case made for why Bregman is untouchable, but most are not giving Springer the credit he is due. Springer is not going anywhere, nor should he.

Why He Is Untouchable

Springer was the first piece of the rebuild to be called up by the Astros to the big league club. Drafted out of Connecticut in 2011, Springer was a quick riser and his call up was the first domino to fall, signaling to fans that the biggest rebuild in Sports History was in its final stages.

But tenure is not the only reason why Springer should be untouchable. Springer debuted in 2014, but finished his first full season in 2016, playing in every game and quietly putting together a solid campaign. Springer hit .260/.359/.457/.815 with 29 HR, 82 RBI, and 168 Hits, totaling 5.1 WAR. As the lead-off hitter for a large chunk of the year, he saw an increase in production once he was moved into the lead-off spot full-time. Like every hitter though, Springer has his faults and the occasional slump. While he does strikeout a bit, his strikeout rate has actually gone down in all three of his seasons to a career low 23.9% in 2016.

The key with Springer when he hits the slump is to limit how long he stays in it. When Springer is seeing the ball well, he’s one of the most dangerous hitters in the game. When the slumps come around, they tend to affect his performance for longer than they should. If he can figure out how to get out of his slumps sooner, he will graduate into the upper echelon of hitters in the MLB. Springer is a hard worker and no doubt is working on improving his hitting.

On the defensive side of the game, Springer is Gold Glove caliber in the OF. For 3 years he has been in RF, but with the signing of Josh Reddick, whose main position is RF, it allows the Astros to shift Springer over to CF. But regardless of where he plays, he makes spectacular plays that are hard to replicate. He has a cannon for an arm that makes even the fastest runners hesitate when he comes up with the ball. He’s exactly what you want out of an OF defensively, and he’s on of the best in the game.

But despite how good he is on defense or offense, arguably the most valuable thing about him is just his presence in the clubhouse. Springer is one of the most likable guys in the locker room, keeping the team loose and being a constant reminder to keep the game fun. He is the glue that holds this team together. He’s one of the few leaders in the clubhouse, one that can mentor to the rookies that find their way onto the team (after all, there were 10 in 2016). He’s young, passionate about the game of baseball, and can relate to the struggles rookies go through or will go through over the course of the season. Talent wise, there probably will be someone better but it’s no simple task to replace the leadership and passion that Springer displays over the course of the season.

You’ve got the perfect player in your lineup and in your clubhouse. You’ve got a power hitter who could hit 30 HR next year. You’ve got a guy that is passionate about the sport, has yet to play 2 full seasons who is fast, can get on base, knock in baserunners, and play lights out in the field, all while making the players around him better. You’d be crazy to trade that away.

Don’t get me wrong when I say, I love Chris Sale. I want Chris Sale. I think he would be a game-changing acquisition for the Astros. But you have to draw the line somewhere when the asking price is as high as Chris Sale’s is. People always say you should not get attached to prospects because no matter how good they are in the minors, they are unproven in the pros. Trust me, I’m attached to prospects more than anyone. But Springer is not a prospect. He’s a proven 27 year old major leaguer that is a fan favorite and a leader that hits .261 with 29 HR, is a wizard on defense, and he hasn’t even reached his full potential yet!

Those type of players don’t just grow on trees, and by trading him, there’s a very good chance you won’t be able to receive someone back that has the same presence as a person and as a player than what Springer brings to the table day in and day out for 162 games. He’s a rarity and a franchise-altering presence in more ways than one.

If the Astros want to nab a guy like Sale, the Astros need to go all in from the farm system. To upgrade at one spot and downgrade at another would be taking 3 steps forward and 3 steps back, putting the team back in the same place they started. With what the White Sox are going to be wanting for Sale, it’s going to be very tough for the two franchises to strike a deal. Sale would be a game changing addition to this team, but at a cost of losing Springer or Bregman, it’s likely a trade that would hurt as much as it would help.