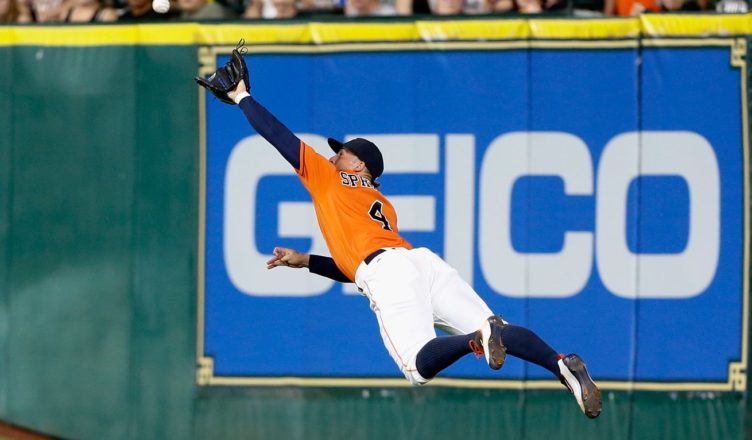 Today we continue our Astros season review series by position taking a look at the right fielders.

The Houston Astros never had a doubt about the talents of George Springer. Since entering the league in 2014, though, concerns over whether he could stay healthy for a full season started to rise. After DL stints in his first two seasons, including a 2015 that saw Springer only play 102 games, Astros fans were relieved Springer not only stayed healthy in 2016, but played in all 162 games.

Last season, George Springer, the 11th overall pick in the 2011 draft, hit .261/.359/.457 with 29 homeruns, 82 rbi’s, 116 runs scored and 9 stolen bases. He also lowered his strikeout rate for the third consecutive season. After hitting second for most of the early part of the season, A.J. Hinch moved Springer to the leadoff spot to try to ignite the Astros offense and it paid off. While Springer’s splits did not really change much between batting first or second, the Astros offense certainly seemed to be more effective, especially after Alex Bregman settled into the two hole after his call up.

Defensively, Springer was spectacular as well. He had 308 putouts, 12 assists, only 2 errors and his ultimate zone rating was a very solid 5.1. More importantly, Springer has developed the reputation of an outfielder that you don’t want to run on. Springer had his best season of his career posting 5.0 WAR.

George Springer had a phenomenal year for the Houston Astros in 2016 and is really turning into a threat both offensively and defensively. At only 27 years old, the Astros expect several more years of high-level play out of Springer.

At this point in the offseason, it is hard to predict who will be manning right field for the Astros. Both George Springer and newly signed Josh Reddick have spent most of their careers playing right field. Some have speculated that Reddick might man right with Springer moving to center and others have assumed Springer stays in right with Reddick moving to left. The decision on who plays right may also be affected by any other moves that Jeff Luhnow makes this offseason. Regardless of whether it is Springer or Reddick, the Astros will have a Gold Glove quality outfielder in right and one that can handle the bat, too.