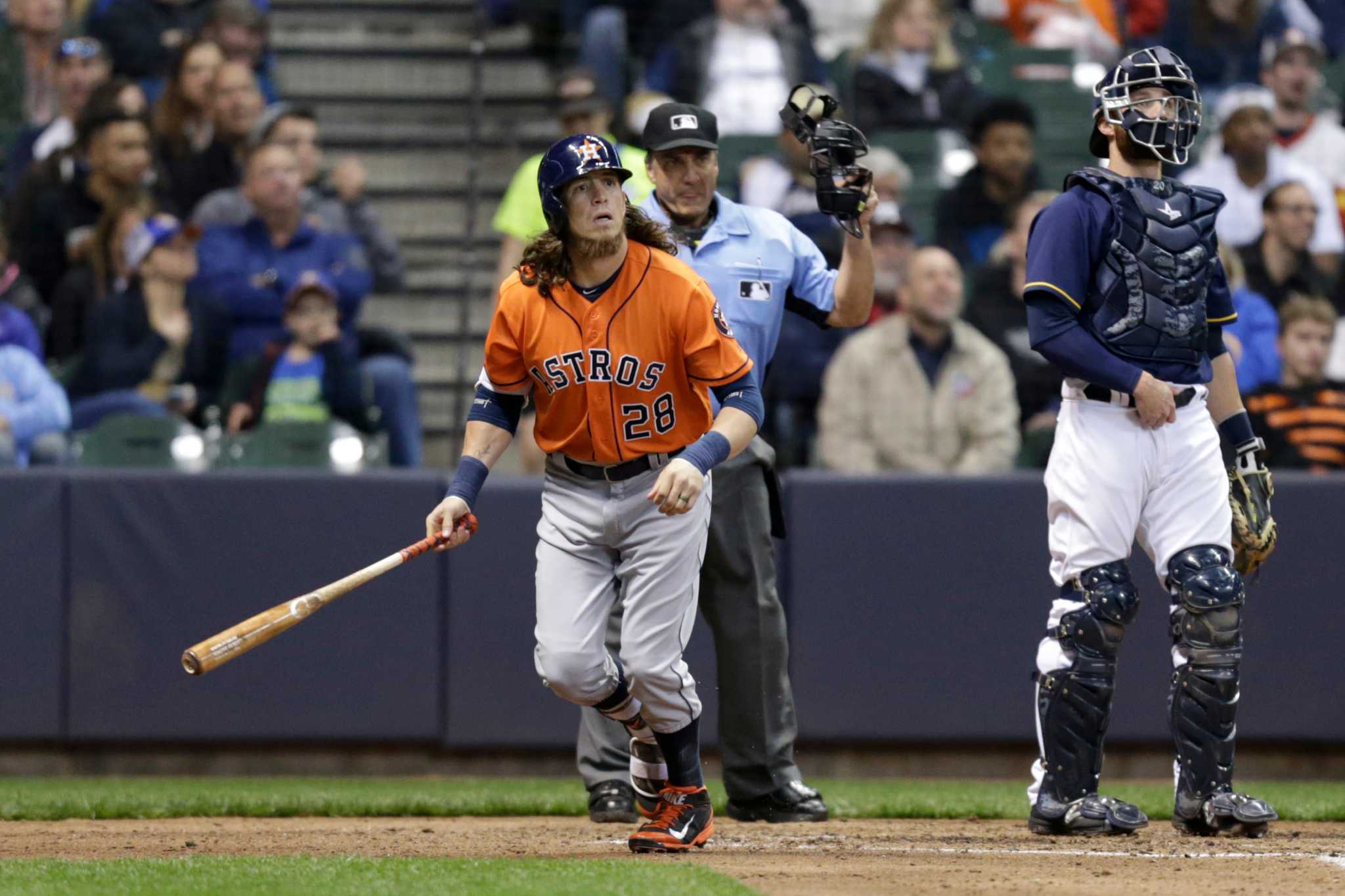 MILWAUKEE, WI - APRIL 09: Colby Rasmus #28 of the Houston Astros hits a two run homer in the fifth inning against the Milwaukee Brewers at Miller Park on April 09, 2016 in Milwaukee, Wisconsin. (Photo by Mike McGinnis/Getty Images)

As we continue our 2016 position review series, we shift our focus to left field.

Rasmus played his 2015 September and October hot streak into a $16M qualifying offer.  He became the the first player in MLB history to accept the QO as he returned for 2016.  Rasmus had a torrid start to the year and it looked like the Astros investment had payed off, however as the Astros started to hit their stride Rasmus began slumping.  He ended up playing his way out of the every day lineup before going on the DL on August 7th with a cyst issue in his right ear.  Rasmus returned from the DL on August 30th and hit a homer in his first at bat, signaling he was turning things around, but that wasn’t the case and by mid-September Rasmus was asking AJ Hinch to leave him out of the lineup.  Rasmus finished slashing .206/.286/.355 with 15 HR’s in 107 games played, 87 of which in left field.  Rasmus elected free agency last week and isn’t expected to return.

Rookie left fielder Tony Kemp struggled over two separate big league stints in 2016.  Kemp was one of the Astros most highly thought of prospects heading into 2016, and was called up on May 16th along with Colin Moran in order to help the slumping Astros bust out.  The diminutive Kemp was supposed to help cut down on strikeouts and make an impact on the base paths.  While the Astros did break out of the slump, Kemp wasn’t the reason, and he was eventually sent back down to Fresno on June 25th.  When Rasmus went on the DL on August 7th, Kemp earned another opportunity.  Kemp slashed .217/.296/.325 with 1 HR and 2 SB over 59 games played.  He also left a lot to be desired with his defensive play in the outfield.

The Astros called up Hernandez after the release of the oft-maligned Carlos Gomez.  Initially expected to play center field, the hot bat of Jake Marisnick down the stretch pushed Hernandez to left.  Hernandez showed flashes of brilliance, but wasn’t able to find the consistent production he enjoyed at the minor league level in 2016.  Hernandez slashed .230/.304/.420 with 4 HR over 100 AB’s in 41 games (22 in left field).  He played a strong defensive outfield and showed off a top notch throwing arm.

Primetime continues to show off his versatility, as he amassed 18 games at left field in 2016.  His lack of speed makes him a suboptimal option in the outfield, but he plays well enough when needed in a pinch, and that’s his value to this team.

Left field and first base were the two big problem areas in 2016 and will most likely be addressed via free agency or trade in 2017.  Of the names above, Hernandez would be the most likely option as a starter.  The Astros already claimed Nori Aoki off of waivers from the Mariners and are expected to make runs at Yoenis Cespedes and other top free agent bats.  With the promotions of Hernandez and Kemp, the Astros lack top end outfield talent at the higher minor league levels, as top prospects Kyle Tucker, Daz Cameron, and Ronnie Dawson are still a few years away.  Derek Fisher could make an impact in 2017 depending on how the offseason goes.