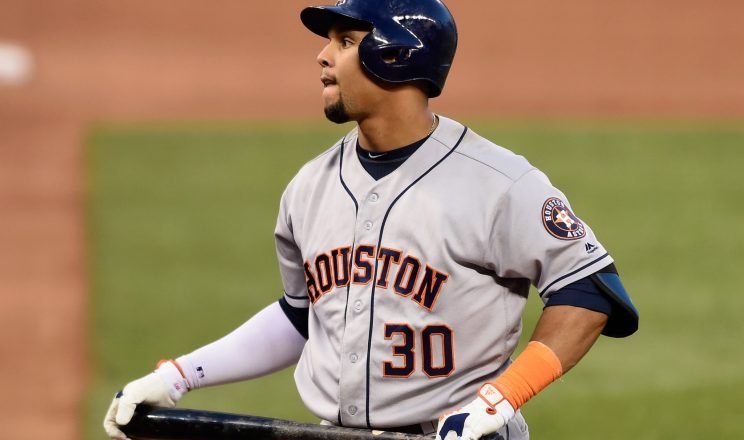 Today we continue our Astros season review series by position with the center fielders.

The biggest trade of the Jeff Luhnow era did not produce the fruits that everyone expected.  Gomez struggled mightily in an Astros uniform, eventually playing his way out of the lineup and off the roster completely.  The Astros cut Gomez on August 18th after a road game in Minnesota in which Gomez had multiple defensive lapses that helped lead to an Astros loss.  Gomez’s attitude and lack of production really rubbed people the wrong way and he became a whipping-boy of sorts for the Astros struggles.  Gomez said he wanted to come in and be productive in a new city and he put too much pressure on himself, and that ended up defining his Astros career.  He ended up signing with the Rangers for the stretch run and played better baseball.  He is now a free agent.

Marisnick benefited from Gomez’s release as he saw increased playing time down the stretch.  He showed off his usual stellar defense in center field, unfortunately he also showed off his normal inconsistencies at the plate.  He had a hot bat towards the end of the year, but it wasn’t enough to make the stat line look respectable.  It will be interesting to see what role Marisnick plays in 2017 with the signing off Josh Reddick.

The Astros called up Hernandez after Gomez’s release.  Hernandez had a torrid season in the minors and played his way into a big league stint.  He showed flashes of brilliance at the major league level, but was mostly inconsistent.  Hernandez has a plus-plus arm and is a good defender.  If he finds his way at the plate he will be a very good player in this league.  Baseball America recently rated him the Astros 8th best prospect.

The only thing that keeps the center fielders from getting an F is Marisnick’s defense and Hernandez’s potential.

It will be interesting to see what A.J. Hinch does with the outfield after the signing of Josh Reddick and departure of Colby Rasmus.  Most people project that Reddick will start in left field, with George Springer starting in right field, and Marisnick and Hernandez splitting time in center.  I think the Astros will go a different route.  Reddick has played a majority of his career in right field and has played it extremely well.  A good amount of his value comes from defense.  Simply put, left field isn’t as defensively valuable a position as right field.  I think George Springer slides to center field while Reddick starts in right and Hernandez and Nori Aoki split time in left, leaving Jake Marisnick as the odd man out.  As the saying goes, if you hit you don’t sit.  Aoki has hit at every stop in his big league career and Hernandez has the potential to be a stud.  Springer can also play plus defense in center and Reddick will be a gold glove contender in right.  This lineup allows the Astros to get the most productive bats in the lineup, allow a young stud like Hernandez to develop, and still trot out a well above average defensive outfield.