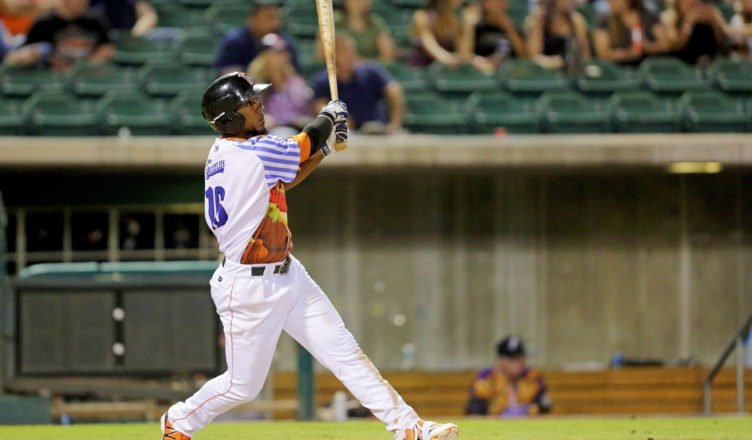 This week we take a look at the right field position.  The Astros rotated their minor league outfielders often so for this post I will focus on guys who played the majority of their games in right field.

Another late round pick for the Astros that has blossomed. Ferguson, drafted in the 19th round in 2015, had a phenomenal 2016 season. After making his full season debut for Quad Cities just months after the draft last season, he started this year in High-A. Ferguson dominated the California League, especially late. He hit .348 in July and .398 in August. His final 10 games in the California League he hit .488 with 5 HR and 20 RBI. He was promoted to Corpus in late August and improved on his numbers hitting .327 with 3 HR in 15 games. He has very good speed and is a solid defender. He hit for power, stole bases, and posted solid OBP numbers this season.

Straw was drafted by the Astros in the 12th round of the 2015 draft. In the 2016 season he played in 76 games in the outfield with 31 games in RF, 26 games in CF, and 20 games in LF. He should project as a center fielder moving forward. Straw made his full season debut on May 20th and it didn’t take him long to get going. He finished May hitting just .257 but hit .326 in June and then hit .423 in July. On August 11th, Straw was promoted to Lancaster and still managed to hit .385 between two different levels that month. Straw is one of the fastest players in the Astros system and showed off a very good hit tool this season. He finished the season with a .358 BA and 124 hits in his 87 games played. You can read more about Straw here.

De La Cruz was signed by the Astros out of the Dominican Republic in 2013. He made his Astros MiLB debut in 2014 playing for the DSL Astros and hitting .262 in 59 games. He played stateside in 2015 with the GCL Astros hitting .242. This season he spent time between Greeneville/Tri-City hitting .239 with 3 HR, 18 RBI in 44 games. He played this season at just 19 years old.

As seen in the center field review, there are a ton of legit outfield prospects. Not all of them can stay in center which pushes some over to RF. With those guys plus the likes of Straw and Ferguson, the Astros have plenty to look forward to in the outfield. Teoscar had a breakout 2016 season and hopefully he can build on it at the MLB level in 2017.