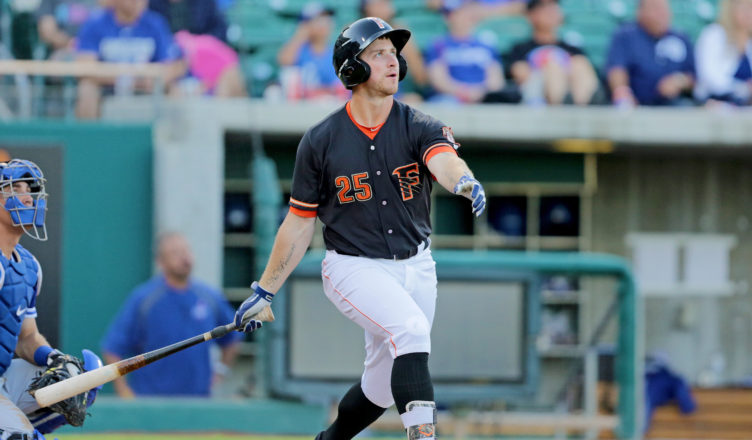 Now that the season is over and the MiLB awards have been handed out, we will review each position in the minor league system. This week we take a look at the left field position.  The Astros rotated their minor league outfielders often so for this post I will focus on guys who played the majority of their games in left field.

Kemmer, a 21st round pick in 2013, had a breakout 2105 season when he hit .327 with 18 HR and 65 RBI for the Corpus Christi Hooks. Kemmer started out the season slow but really picked it up in the second half of the season. The left handed hitter finished with 18 HR in 120 AAA games. In the 2nd half of the season he hit .274 with 13 HR and 42 RBI in 52 games. He should have a chance to compete for a spot with the Astros this spring. He is solid defensively and has stolen 17 bases in the last two seasons.

What Boyd lacks in size, 5’9″ 175 lbs, he makes up for it in every other facet. Boyd had 35 extra base hits, 37 stolen bases, and a solid OBP. He was drafted by the Astros in the 8th round of the 2014 draft and has steadily moved through the system. This season he played 34 games in left field, 26 games in right field, and 20 games in center field. He hit very well in Lancaster but just .211 in 22 games with Corpus Christi. He figures to be one of the main outfielders for the Hooks in 2017.

Sewald was drafted by the Astros in the 14th round of the 2015 draft. Sewald is another toolsy outfielder in the Astros system. He started out the season with Quad Cities and hit .219 in 29 games before being promoted to Lancaster where he went on a tear. He finished the season hitting .287 with 6 HR for Lancaster. He also drew 45 walks in 79 games and stole 39 bases overall.

Garcia was signed out of Cuba by the Astros in 2015 after playing three years professionally in Cuba. This was his first full season in the Astros system and he played well. He started the season with Lancaster and .265 before being promoted to AA where he hit .271 with 3 HR, 20 RBI in 51 games. He finished with Fresno where he hit .393 in 17 games. He isn’t big but does a very good job putting the bat on the ball and hitting for average.

Johnson was drafted by the Astros out of Missouri after hitting 24 HR as a senior. He came to the Astros and did just that hitting 10 homers over 53 games. He struggled a bit with Quad Cities hitting just .149 in 21 games but it wasn’t enough to make a judgment. Hopefully he will get it going next season.

Dawson was drafted by the Astros in the 2nd round of this year’s draft. He started a bit slow but finished with respectable numbers. He showed his power, speed, and on base ability this season. He should start next season in High-A and many will be watching how he performs.

The outfield is hard to gauge since the Astros have shifted many guys around this season. Overall the Astros have a very strong outfield group in the minor leagues. The Astros have guys ready to help in Kemmer, Garcia and a few others. Over all the outfield position should produce some nice prospects over the next few years.