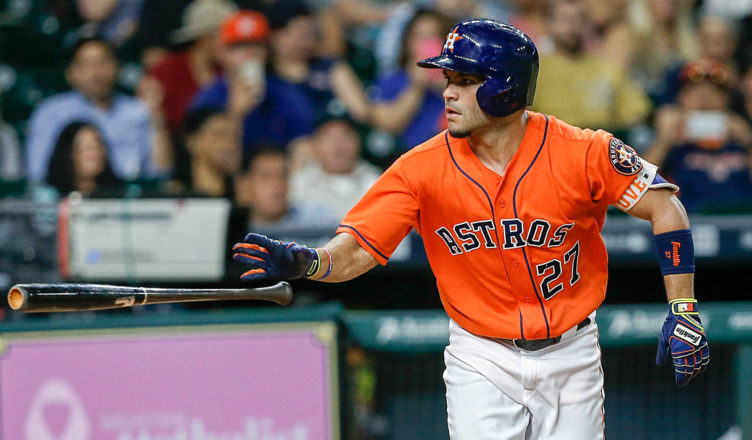 As we continue our series on the Astros’ 2016 Position Reviews, we now shift our focus to second base:

Everyone in baseball coming into the year knew about Jose Altuve. The Pint-Size Phenom was a hit fanatic coming off another 200 hit season, setting career highs in HR and RBI in 2015.

What he proceeded to do in 2016 blew even Astros fans away. Altuve broke out, if that’s even possible given his previous seasons, shattering his career highs in HR and RBI again (15 to 24, 66 to 96 respectively) and besting his career highs in Runs, 3B, BB, OBP, and SLG. He even a managed to draw 11 intentional walks, drawing more than the likes of Kris Bryant, Chris Davis, and Josh Donaldson. He raised his power numbers while not skipping a single beat as a contact hitter, proving he really is one of the best hitters in baseball. His fielding is very good to and has improved a ton since making his MLB debut. He makes his fair share of web gems while more than holding his own at 2B, though he does prove to be mortal every now and then with some mishaps. Nevertheless, he is one of the most complete players in baseball

Altuve took his game to the next level in 2016, establishing himself as a legitimate power threat and adding his name to the conversation of one of the best players in all of baseball. Moving forward, I have no idea how we should project Altuve. He’s without a doubt the best 2B in all of baseball, and he only gets better every year. Is the power surge permanent? Will he get 200 hits for the 4th straight year? Could he hit for .400? (Come on, let’s not COMPLETELY rule it out)

Marwin’s name will appear all over the field because he’s literally asked to play everywhere. Altuve only missed one game in 2016, though he did DH a number of times, leading to Marwin getting the start at 2B 14 times in season. Marwin is great defensively anywhere he plays, and his bat steadily improved over his 141 games in the lineup.

Kemp was a 2B for most of his minor league career, and he will continue to see limited time in the infield, though most of his time spent on the field will be in the outfield. He has the potential to become a better hitter as he progresses, as he was a dangerous hitter in the minor leagues. He could become a key piece in the Astros’ depth moving forward

You can’t have the season Altuve had and tell me this position doesn’t grade out to be an A+. Altuve was one of the most valuable players in baseball, and he has a legit backup that can play if he needs a rest, though that is not often. Enough said.

Thankfully, Altuve is going to be an Astro for a long time, so the Astros will most likely attempt to lock him down long-term. Granted, he isn’t a Free Agent until 2020 and his contract is one of the biggest steals in baseball as it is. It’s not a total priority to lock him up just yet. Though when the time comes, Altuve’s payday will be enormous. Having hired Scott Boras over the offseason, Altuve will be getting ever last dime that he deserves. And he’s still worth it.