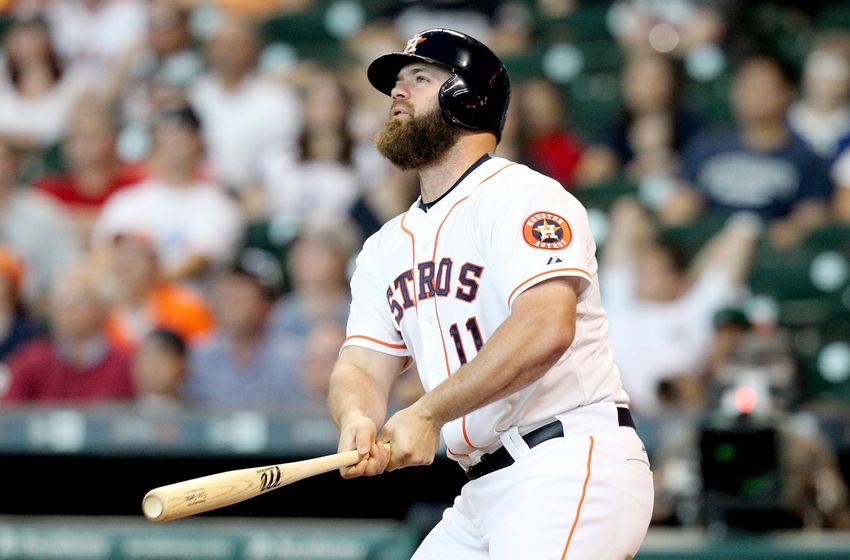 The season has come to a close for the Houston Astros without seeing a Postseason game. With the offseason officially underway for the Astros, we now have 6 month period in which we will attempt to occupy ourselves before the 2017 season begins. We will be doing a position review for every position as we progress through the offseason. first up, the catching position.

Baseball has seen a steady increase in teams looking for a defense-first catcher instead of an offense-first one, and the Astros haven’t been an exception. Let’s take a look into the Astros Catching Review for 2016.

Having come into the league in 2010, Jason Castro is the longest tenure Astro on the club. He’s been up and down at the plate in his 6 years with the club but has been very solid behind the plate. Castro had a subpar season at the plate finishing with an 88 OPS+ and a .684 OPS. His defense was good once again but had only 30 extra base hits in 113 games. A Free Agent at the conclusion of the 2016 Postseason, Castro could fetch a fair price for a catching-needy team if the Astros decide to make him walk. Overall this season could be seen as a disappointment for him failing to come close to his breakout 2013 season.

Originally a catcher that came up with the Braves, Gattis hadn’t caught in his time in Houston until the Astros needed his catching services and sent him to AA Corpus Christi to shake out the cobwebs. As a backup that split time with Castro, Gattis was actually better at the plate as a catcher than as a DH (.992 OPS vs .709 OPS). He proved to be solid defensively as well, establishing himself as a true backup catcher. With Castro set to test Free Agency, Gattis could see more time behind the plate. Gattis struggled with balls in the dirt at times but that is something he can improve. He finished the season with a career high in HRs (32) and OPS (.826).

Stassi has been with the Astros’ franchise ever since the end of the 2012 season when he was traded to Houston in the first Jed Lowrie trade. He has seen limited time in all 4 seasons he’s been with the club, but hasn’t shown enough at or behind the plate to suggest a role with the team in the future.

Traded to the Astros straight up for Dan Straily before the season began due to the Astros’ need of a catcher with Stassi’s early injury, the 35 year old catcher struggled mightily in Houston before being cut after 15 games.

Maybe I’m being generous given the production, or lack thereof, at the plate, but Evan Gattis had great numbers at the plate in games he was penciled into the catching position. Castro had his flashes at the plate too but couldn’t remain consistent. Gattis proved he could handle catcher and looks to gain more playing time there in the future, especially if Castro decides to leave Houston, though expect Houston to make a strong push to re-sign him. As for Kratz and Stassi, their time was short lived, which is a good thing. The Astros catchers finished 8th in the MLB in WAR and 10th in wRC+

Chances are, catcher will remain the same in 2017. The Astros won’t let Castro walk without a fight, but if somehow they could get in on the Wilson Ramos sweepstakes they could try their hand with someone else. In the system, the Astros have Tyler Heineman, a defense-first C, in AAA but he’s not too shabby at the plate. He could see some time soon if there was a potential injury. In my opinion though, Garrett Stubbs is the guy the Astros need to have patience with. He’s both a great defender and a great hitter who will probably start 2017 in AA and depending on how he and the MLB catchers perform could see his Debut sometime in 2017.

Overall, I think the Astros will be alright at catcher if they decide to resign Castro. Gattis will still get his starts at C and Castro has the potential to hit at the plate, like he showed in 2013. I’m skeptical on Ramos as his breakout season has come out of nowhere, but if they could get him for a team friendly contract (not likely) I’d be up for the chance. I hate to throw around titles like “…of The Future” since we’ve seen some with that title bestowed upon them fail, but Garrett Stubbs looks like our catcher of the future and I’m interested in seeing what he can do in 2017 as he aims for the Big Leagues.