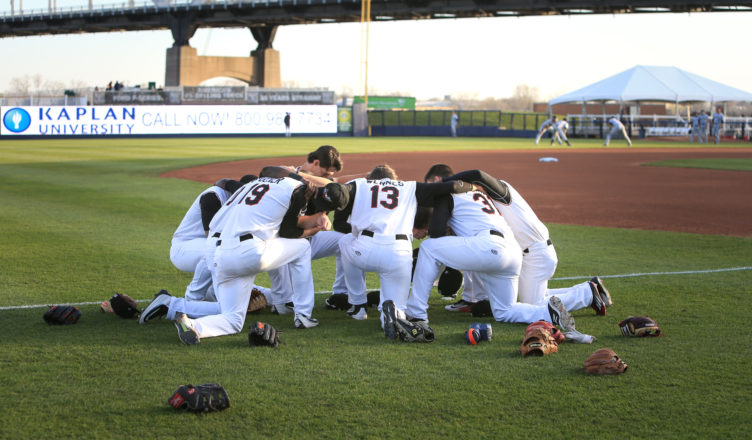 The Quad Cities River Bandits were a team that never quit. Starting the season at 2-10 was not what they wanted, however  with the temperatures hitting no higher than 45 the River Bandits found themselves finishing the month of April on a hot streak. As the season progressed we saw players move up and a couple move down but nothing changed as the heart of the Bandits still beat strong. They missed the playoffs after qualifying last season and winning the Midwest League Championship in 2013. Many would think that this season was a disappointment but in reality this season was a huge success as the Bandits moved up a mass of players before the mid point of the season. Several of those players finished the season in AA due to how quickly they progressed. The roster for Quad Cities at the end of the season had just a small handful of the players that started with the team from day one.

The River Bandits did not have a fantastic start to the season going just 2-10 in their first 12 games. Some would feel that with a start like that they would not be anywhere near the top of the standing or be any good for that matter. Despite the losses of pitchers Jacob Dorris, Ryan Deemes and Alex Winkelman, the River Bandits used great pitching from Albert Abreu, Justin Ferrell and Franklin Perez, to kick start the second half of their season. Justin Ferrell lead the team with 6 wins for the season and had a 4.74 ERA. Myles Straw lead the way for the hitters with his .374 batting average, was 4th in runs scored with 40, was 2nd in stolen bases with 17 and was 3rd on the team in total bases with 127. Dexture McCall lead the team in total bases and was a huge asset in the fact he came through several times in the clutch. The Astros 2016 sixth round pick Stephen Wrenn also mad an impact in the second half. Although we saw some good efforts and very close games the Bandits ended the season on a huge down note winning just 3 of their final 16 games including a 12-1 win in thir final game. A season of heart stopping wins and heart breaking losses but a very bright future.

The Bandits should have an exciting season in 2017. The core of that team should be Stephen Wrenn, Randy Cesar and a possible return for Connor Goedert. That being said if McCall and Bobby Wernes also return than things will look even brighter. Justin Ferrell, should he return, would lead the pitching staff and make for a solid starter. Those names are enough to get me excited for what is to come in 2017. The Bandits also signed another 2 year player development contract with the Houston Astros. That means that the Astros and Bandits will continue to develop a solid system of young players. Even with a bad finish to 2016 I can honestly say that 2017 looks brighter than ever for Quad Cities and the Astros. Modern Woodmen Park should be rocking in 2017 with great baseball and great family fun.

View all posts by Lee Stone →