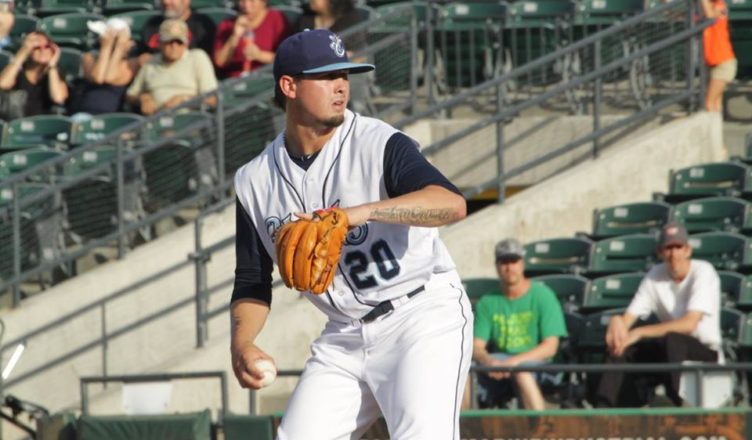 Deetz was born in Nixa, Missouri and attended college at Northeastern Oklahoma A&M. He had Tommy John Surgery in college but made a full recovery. In the 2014 season he posted a 3.56 ERA with 42 BB/72 SO in 55.2 innings. This production and the potential in Deetz led the Astros to select him in the 11th round of the 2014 MLB Draft.

Deetz is listed at 6’1″ and 195 lbs. He is a very athletic pitcher and reportedly runs a 4.40 40 yard dash. He has all the makings and potential of a top pitching prospect. Deetz has a mid to high 90s fastball and a very smooth delivery. His secondary pitch is his slider which is of the wipeout variety. It has a sharp break and he does a good job mixing his pitches to keep hitters off balance.

Deetz pitched for Greeneville following the draft but struggled allowing 25 earned runs in 25.1 innings. Deetz responded with a much better 2015 season. He started the season with Tri-City where he had a 2.86 ERA over 28.1 innings. This earned him a promotion to Quad Cities where he was nearly unhittable allowing just 17 hits in 35.1 innings with a 0.76 ERA.

Deetz started out the 2016 season with the Lancaster Jethawks in the California League, which is a great hitter’s league. Deetz held his own with a 4.24 ERA and 86 K in 93.1 innings. Deetz earned a promotion to Double-A Corpus Christi in August and has made two starts for the Hooks showing his potential.

In those two starts, Deetz is a 2-0 with a 0.00 ERA and 2 BB/17 K in just 12 innings. At just 22 years old, he still has time to continuing building on what he has accomplished this season. He should see some action in the Texas League Playoffs and has a chance to potentially help the Astros in 2017.