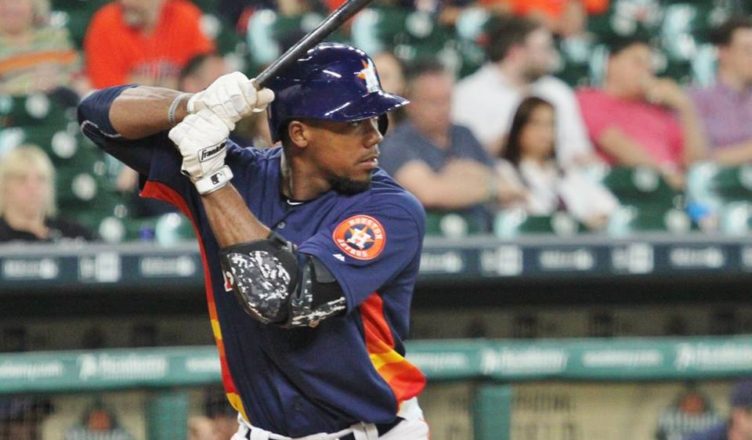 Last night the Astros had another prospect make their MLB debut and Teoscar Hernandez did not disappoint.

As noted in previous articles, Teoscar made some adjustments this off season that helped him hit .307/.377/.459 with 28 2B, 10 HR, 53 RBI, 35 SB between AA/AAA. After speaking some people close to Teoscar, it sounds like this off season he was dedicated to improving his pitch selection and hitting the ball to right field. These adjustments definitely helped.

All the work he put in all came together when he received the call up to the Astros. He made the flight from Fresno to Toronto but ran into some trouble in customs and got held up a bit. He ended up getting to the ballpark just an hour before the first pitch and didn’t even get to participate in batting practice but he would start anyways. Teoscar was in the lineup hitting 8th and playing center field.

Teoscar came to the plate leading off the top of the third. He did a great job being patient and drew a walk off of Liriano. He would eventually come around to score on a Carlos Correa 2 run single.

In the 4th he came to bat with Gattis on second and one out. On 1-1 pitch he hit it hard to center field but playable for Upton as he made the catch.

In his third appearance he worked himself into another favorable count at 3-1. After swinging through the 3-1 pitch, he set on a 3-2 curveball from Lirano and crushed it deep to LF for his first major league hit, a solo HR.

In his fourth PA of the day Teoscar jumped on the first pitch hitting it to the right side. The second baseman, Travis, was able to field the ball in shallow right field. He turned made a throw but the first baseman couldn’t handle it and Teoscar was rewarded with a single.

Teoscar came up one more time in the 9th with the bases loaded. He again worked himself into a hitters count at 2-1. He hit the ball hard on the ground but right at the second baseman who flipped to shortstop for a force out.

Teoscar had a few chances in the outfield but made the routine plays. Overall is was a fantastic debut as he was able to check off a few career milestones. Congrats to Teoscar on his first homerun and we are looking forward to seeing him hit many more. Oh, and Joseph Musgrove was pretty good striking out 7 in 7 innings picking up his first win.