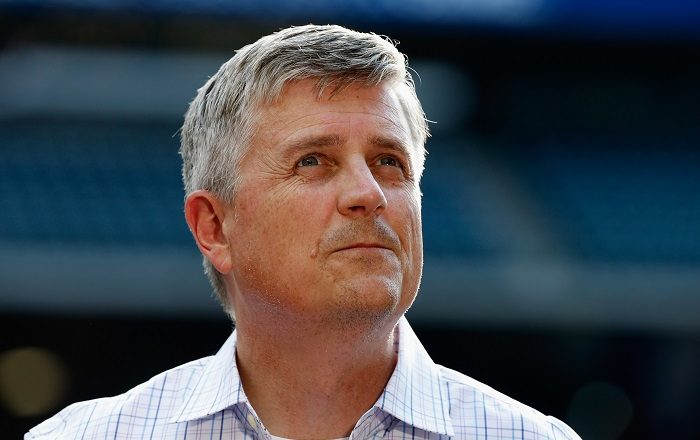 Jeff Luhnow surprisingly is no stranger to criticism. He’s received critiques for a sliver of moves he has signed off on since taking the title of the Astros’ General Manager back in December of 2011. People have been questioning the moves he has made ever since the rebuild began. But it seems like the memory of Astros’ fans or even just fans of baseball have been short-circuited, or perhaps they just started paying attention.

In 4 years, people have either forgotten that or didn’t pay attention long enough back then to realize it. Luhnow inherited a team that was going nowhere. The light that fans saw at the end of the tunnel was actually an incoming train. It was cruel to watch the team lose.

Luhnow’s strategy to fix the team was the very unpopular route. No Astro fan is going to tell you “The Rebuild” was fun. Watching the GM trade the players you were starting to get to know and like wasn’t fun. But unless you understood what he was doing in the beginning, and not many fans did, it all seemed pointless. For the first 3 years of Luhnow’s tenure, the Astros’ clubhouse was a revolving door filled with underachieving prospects and players with any sort of value waiting to be called into the Manager’s office. The strategy seemed ridiculous, insane, and led many to believe there would be no way that it would work.

But it worked. Whether you want to believe he’s holding the team back or not, the strategy worked. The Farm System is still one of the best despite having seen numerous prospects graduate through its rankings, and the Astros are contending for the Postseason. While 2016 hasn’t been the year we expected it to be, we’re much farther along than all of us thought we would be 5 years after “The Rebuild” started. Making the Postseason in 2015 was just the start.

Now that Luhnow has built the team up, making the Astros a Contender year in and year out, Luhnow draws criticism because some believe he is not willing to trade from his Top-of-the-Line Farm System for pieces to make his team better.

All were prospects in the Astros’ system. All were traded for Major League pieces. That’s 13 Top-Prospects traded in basically 1 year. 8 of those were in the 2013 Astros Top-20 Prospects rankings. Tell me again why Luhnow won’t trade away his prospects?

2016 saw it’s Trade Deadline become a contest to see who could spend the most for a mirage. Drew Pomeranz, a career 3.73 ERA pitcher having a good year, was traded for one of Boston’s best prospects. The Yankees set the market for Andrew Miller by trading Aroldis Chapman. The Yankees’ return for Chapman wasn’t necessarily a King’s Ransom, but more like a Prince’s Ransom. That trade, along with the Pomeranz trade, jacked the price way up for Miller and other pitchers, making it virtually impossible to make a trade for anyone in Baseball without giving up more than you bargained for.

I don’t blame Luhnow for standing pat at the deadline. Let’s be honest for a second: Would making only one move this deadline have vaulted the Astros into the Playoffs? All signs point to no. Why? Because this team is not one piece away. Making more than one move at the Deadline would’ve crippled the Farm System. Would that be such a wise move considering a huge reason why the Astros are winning again is because of the players developed through the farm? Players such as Carlos Correa, Lance McCullers, George Springer, Alex Bregman, AJ Reed, Joe Musgrove, and Chris Devenski are making the team fun to watch again and the Astros now have some game-changing pieces just because they were patient with them.

Do I want the Astros to keep every prospect we ever get our hands on? Not necessarily, because having that kind of ammo makes striking a trade together much simpler. But standing pat at the Deadline instead of cutting ties with a large chunk of the better part of the farm was the right move whether you want to believe it or not. There’s a difference between using the farm to trade and trading away the farm and the difference is that one has to know where to draw the line. Luhnow drew it on the August 1st Deadline.

I’m not here to tell you Jeff Luhnow is perfect. He’s made and will make mistakes in the future, but what GM hasn’t? Let’s not act like Luhnow is holding the team back because of the mistakes he’s made, because if we’re using that logic, then every team in the MLB is being held back by their GM.

No GM is exempted from this form of logic. Theo Epstein has built up a Cubs team that could finally find the World Series for the first time in 71 years. Imagine how good they would be if they still had DJ LeMahieu in their lineup. He very well could be the NL Batting Champion. Instead he was traded in 2011 to the Rockies for two scrubs. Meanwhile, Billy Beane traded Carlos Gonzalez for Matt Holliday, then traded Holliday for Brett Wallace (Yes, THAT Brett Wallace). Beane also traded away MVP Candidate Josh Donaldson. Speaking of Donaldson, the GM that picked him up, Alex Anthopoulos, is not without trade sin either. Remember when Noah Syndergaard and Travis d’Arnaud were Blue Jays?

Now you see where I’m coming from? Even the best in baseball’s Front Offices make brutal mistakes. The Gomez trade was one of the more unfortunate trades of Luhnow’s career. So live and learn. But let’s not let that distract us from everything else he’s done. The Minor League System, despite seeing numerous prospect traded and countless others graduating from prospect-status, is still Top-Notch and loaded for the future. The Major League Roster is competitive in Houston really for the first time since 2005. Once again, while 2016 wasn’t the year we all wanted it to be, let’s not hit the self-destruct button over it. The team still has a great group of talented players that will be cornerstones for the future. It’s time to build around them, and the way to do that is to learn from the mistakes and trust the people that have gotten us this far.

This offseason could be a big one for Luhnow. The Rookies in Houston are giving the Astros something to consider for the future as they start to get comfortable with the Major League Lifestyle. With Valbuena, Castro, and Fister set to test Free Agency, Luhnow has the roster flexibility and the wallet to go pluck who he wants out of the Class if they fit the mold he’s looking for. 2016 has been somewhat of a disappointment, but that is due in no part to Jeff Luhnow. Luhnow has done his job extraordinarily well and can only let the players do the talking for him. With the players he has brought to Houston, he’s put Houston in a position to win and win big in the future, and there is no reason he should be scrutinized for that.