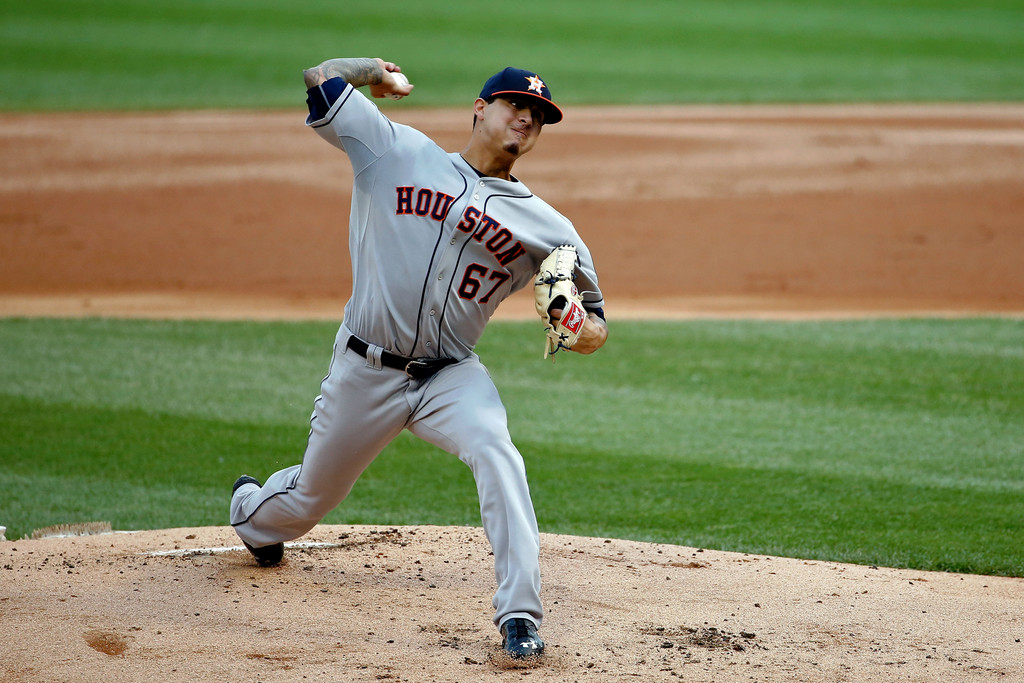 Houston Astros 2010 Draft: Where Are They Now?

A draft in which a team has three first round picks should be one we look back on as the draft that helped rebuild the farm and set the team up for the future. Unfortunately, this didn’t come together for the Astros. While there were some promising picks and not all “busts”, this draft left a lot to be desired.

This pick was seen by many as an overdraft. Baseball America had DeShields ranked the #55 hitter in the 2010 MLB Draft with some having him lower. Nonetheless, the Astros selected DeShields 8th overall. He was still seen as a good prospect though with elite speed. He struggled early on in the minors and changed positions to second base but had a break through in 2012. In that season, at just 19 years old, he hit .287 with 12 HR, 61 RBI, 101 SB between A/A+. This performance got him on some top 100 prospect lists. He followed that up with another solid season hitting .317 with 5 HR, 54 RBI, 51 SB. In 2014 he spent the full season with Corpus but struggled hitting just .236, though he showed off the speed again with 54 SB. After the 2014 season he was left off the 40 man roster and exposed to the Rule 5 Draft. The Rangers selected DeShields and he spent the 2015 season in the MLB hitting .261 in 121 games. He has bounced up and down in 2016 between MLB and AAA. Not a bad pick but, unfortunately, he wasn’t able to contribute to the Astros

Another somewhat surprising pick here as Foltynewicz was rated the #44 prospect in the 2010 draft according to Baseball America. It took a little while for Foltynewicz to break out but he eventually found himself on top prospect lists as well. He had a decent showing in rookie ball leading the Astros to start him in full season ball at just 19 years old. The 2011 season didn’t go so well though as he went 5-11 with a 4.97 ERA and only 88 K in 134 IP. He repeated Single A in 2012 and found more success going 14-4 with a 3.14 ERA and improving his K rate from 5.9 K/9 to 7/4 K/9. 2013 would be his “breakout” year. Between A+/AA he posted a 3.06 ERA with 124 K in 129.1 IP flashing a fastball touching 100 MPH. He would pitch in AAA the next season but struggled with his command walking 4.6 batter per 9 innings. He had a cup of coffee with the Astros in 2014 posting a 5.30 ERA in 18.2 innings. Prior to the 2015 season, Foltynewicz was dealt to the Braves as one of the pieces in the Evan Gattis deal. With Atlanta he has a 5.07 ERA in 175.2 major league innings.

Kvasnicka, drafted out of the University of Minnesota, was drafted as a catcher but the Astros converted him to third base very early on. He has a decent showing in rookie ball when he hit .234 with 36 RBI in 66 games. He started the 2011 season in A ball and struggled to show power as he hit .260 with just 4 HR. He repeated the same level in 2012 showing a bit more power with 15 HR but hit just .232. Prior to the 2013 season the Astros trade Kvasnicka to the Twins for a minor league pitcher. He played two seasons with the Twins before being released in 2015.

Possibly the best pick of the draft for the Astros as they selected Velasquez out of high school in the 2nd round. Velasquez had a very good debut in rookie ball posting a 3.07 ERA in 29.1 innings. Unfortunately, Velasquez had to have Tommy John Surgery and missed the entire 2011 season. He returned in 2012 and pitched 45.2 innings in rookie ball with a 3.35 ERA. In 2013 he started to show the reason he was selected in the 2nd round. He finished the year with a 3.54 ERA and 142 K in 124.2 innings. 2014 was another solid season for him, causing the Astros to add him to the 40 man roster. Velasquez dominated the minors in 2015 with a 1.91 and 45 K in 33 innings eventually being called up to the Astros where he went 1-1 with a 4.37 ERA. The Astros ended up trading Velasquez to the Phillies in part of the Giles deal. In 2016 he has a 4.31 ERA in 119 innings.

The Astros selected Wates out of Virginia Polytechnic Institute and State Univeristy. He was seen as an athletic outfielder with plus speed. He only played in 12 games in rookie ball and debuted in High-A in 2012. In that season he hit .300 with 6 HR, 75 RBI and 26 stolen bases. The next season at 23 years old he hit .304 in AA with 7 HR, 17 SB. In 2014 he put together a solid season hitting .299 in AAA before being traded to the Marlins along with Jarred Cosart. Wates played with the Marlins AAA affiliate before being released in 2015.

Heath was drafted out of Penn State after putting up a monster junior season where he hit .369 with 19 HR in 51 games. He performed well in his draft year in rookie ball hitting .276 with 10 HR in 61 games. In 2011 he hit .252 with 10 HR between A/A+. Heath started the 2012 season with Lancaster hitting .298 and earning a promotion to AA. He only played in 9 AA game before going on the disabled list. MiLB.com doesn’t show any release information as he is listed as inactive and hasn’t played since 2012.

The Astros drafted Plutko out of high school but opted not to sign and instead attended college at UCLA. He was drafted again by the Indians in the 11th round of the 2013 draft and is currently pitching with their AAA affiliate. This season he has a 3.52 ERA in 150.2 innings.

Drafted out of high school in Puerto Rico, Pena signed quickly and played in rookie ball in the states. The Astros assigned him to full season ball in 2011 but he struggled hitting just .217 with 5 HR in 82 games. He has struggled hitting for much of the minors but is seen as a plus defender. His best offensive season came in 2014 when he hit 13 HR in 93 games for Lancaster. He is currently in AA hitting .233 but has stuck around due to his defense.

The Astros drafted Buchanan out of North Carolina State University and was pretty much as advertised. He was a big innings eater who didn’t walk a ton and he showed that in his first full season as he tossed 165.2 innings with a 3.80 ERA. He struggled in 2012 between AA and AAA but turned in around in 2013. In that season he posted a 2.96 ERA between AA and AAA walking just 22 in 158.1 innings. He continued to pitch well in 2014 getting a call up to the Astros where he had a 4.58 ERA in 35.1 innings. Buchanan came to spring training in 2016 with the Astros but was eventually released. He signed with the Cubs and has a 4.53 ERA in AAA this season.

Shirley was out of Xavier University but pitched well in his time with the Astros system. After dominating in rookie ball in 2010, he struggled with injuries in 2011 and parts of 2012. In 2013 he posted a 3.35 ERA in 75.1 innings. He pitched even better in 2014 when he had a 2.54 ERA between AA and AAA. Once again though, he struggled with injuries in 2015. Shirley pitched with the Astros AAA affiliate this season posting a 5.38 ERA before being being released. He was eventually signed by the Tigers.

Grills was drafted out of high school (Canada) in 2010. He bounced around rookie ball for a few seasons before finally having a solid season in 2014. In that season he was 5-6 with a 3.43 ERA and just 15 walks in 120.2 innings pitched. Grills had a rough 2015 but has responded with a very good 2016. He started in Lancaster but has made it to Fresno (AAA) posting a 3.95 ERA across 3 different levels.